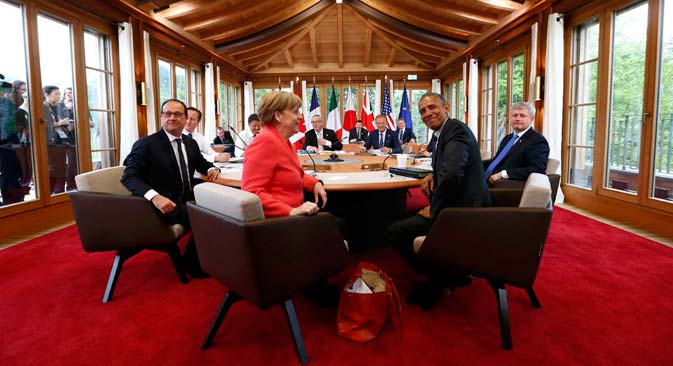 RBTH presents a selection of views from leading Russian media on international events, featuring reports on the G7 summit in Bavaria, the resignation of the Special Representative of the OSCE in Ukraine, and parliamentary elections in Turkey.

West does not want to change its attitude towards Russia

The centrist newspaper Nezavisimaya Gazeta reports on the G7 summit being held in Bavaria, the main challenges for which are the Greek and Ukrainian crises. U.S. President Barack Obama put a question mark over his administration’s previously hard line by sending Secretary of State John Kerry to meet with Russian President Vladimir Putin. Meanwhile, German Chancellor Angela Merkel is under increasing pressure from the German public, prominent members of which are demanding a return to the G8 format.

The G7 is expected to confirm unity in its ranks and a commitment to its chosen course, which may be toughened if the conflict in the southeast of Ukraine escalates, writes the newspaper.

“...The G7 countries are likely to confirm that the issue of the return of Russia to the club, and the [return of] format of the club itself to G8, is not on the agenda for the foreseeable future, until there is a fundamental revision of Russian foreign policy,” said Dmitry Suslov, deputy director of the Center for Comprehensive European and International Studies at the Higher School of Economics in Moscow.

Suslov believes that the West has become convinced that its policy of containment and economic pressure is not effective, but it cannot abandon this stance due to the enormous cost to its reputation.

Influential business daily Vedomosti reports that the special representative of the OSCE Chairperson-in-Office in Ukraine, the Swiss diplomat Heidi Tagliavini, has resigned.

“Tagliavini may have become tired of the fact that <...> political dialogue has reached an impasse,” said Balazs Yarabik of the Carnegie Endowment for International Peace, commenting on the resignation. The reason for this is that Kiev, the self-proclaimed “republics” in Ukraine’s Donbass region and Moscow are not fully satisfied with the current situation. According to experts, the Ukrainian authorities are dissatisfied with the Minsk peace agreements, which they are not ready to fulfill before the return of the rebel-controlled territory to Kiev, the idea of discussing political and economic reforms with the separatists is unimaginable.

“The OSCE has often accused both sides of violating the ceasefire, not just the rebels, as Kiev would have liked,” said Alexander Baunov of the Moscow Carnegie Center. “Perhaps Tagliavini understands the inevitability of the war resuming in the summer. Who would want to be present when that happens?”

Business daily Kommersant reviews the parliamentary elections in Turkey, in which the preliminary results were disappointing for the ruling moderate-Islamist Justice and Development Party (AKP).

The key issue on the eve of the election was whether the Peoples’ Democratic Party (HDP) would achieve the minimum 10 percent electoral threshold. In the end, it passed this threshold and Turkey’s three-party parliamentary system turned into a four-party system. After the previous elections, the AKP was able to form a single-party government, but this time it did not receive an absolute majority, the newspaper adds. Kommersant explains that this jeopardizes the plans of Turkish President Recep Tayyip Erdogan to make changes to the constitution, which would grant him unlimited executive powers.

The first results, according to which the ruling party received less than half of the seats in the 550-seat parliament, collecting about 42 percent of the votes, were already described as a crushing defeat for the authorities, the newspaper said. Kurds and other supporters of the HDP were celebrating their victory – they are destined for 70 seats in the Majlis, the Turkish legislature. Russian Turkologist Ilshat Sayetov, in an interview with Kommersant, did not rule out that the authorities might resort to fraud, given that these elections are extremely important for the ruling party.

The newspaper stresses that these elections have split the country. The result may well lead to a “minority government,” as the supporters of Erdogan have already predicted, and then, perhaps, early elections, writes Kommersant.