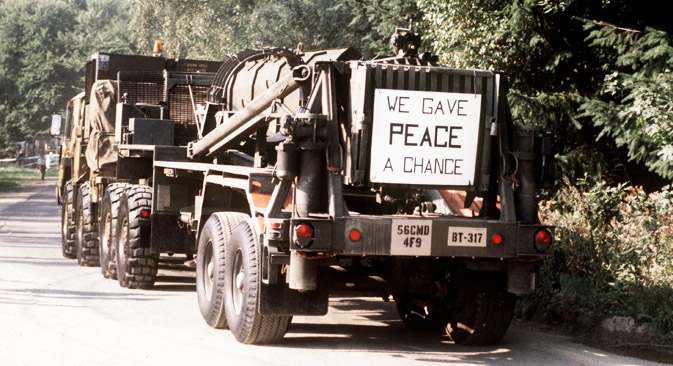 The first Pershing II missiles are transported away from the deployment place in Heilbronn, Germany, September 1, 1988, according to the INF agreement between the U.S. and Russia. Source: DPA/Vostock-Photo

RBTH presents a selection of views from leading Russian media on international events, featuring reports on the possible deployment of U.S. nuclear missiles in the UK, the G7 summit in Bavaria, and ex-Florida governor Jeb Bush’s announcement of plans to visit Europe.

The business daily Kommersant reports on Moscow’s reaction to the statement by UK Foreign Secretary Philip Hammond on the possibility of the deployment of U.S. nuclear missiles on British territory.

In an interview with the BBC, Hammond did not rule out this opportunity. He explained that such a move could be a response to what the West sees as increased "Russian military activity." According to the U.S. leadership, such a measure could be a response to alleged Russian breaches of the Intermediate-Range Nuclear Forces Treaty (INF), the newspaper reports.

The Kremlin and the State Duma noted that so far it is only theoretical talk, which, however, is nonetheless contributing to the "buildup of tensions" in Europe. The Russian Foreign Ministry has made it clear that further "proactive steps by the U.S. to aggravate bilateral relations" will not go unanswered.

The head of the State Duma's Committee for International Affairs, Alexei Pushkov, said in an interview with Kommersant that the "practical realization of the threat would cause a huge outcry in the European countries, as it was during the Cold War, and would create considerable political difficulties both for the British and U.S. leadership."

"The deployment of American intermediate- and shorter-range missiles in Europe, especially equipped with nuclear warheads, will not only to put an end to the INF Treaty, but will in fact mean open confrontation with Russia," Yevgeny Buzhinsky, the chairman of the council of the Center for Political Studies (PIR Center), told the newspaper.

"In this case, we would have to move the Iskander missiles to the front lines. It would be a re-launch of the Cold War, in its worst-case scenario at that."

U.S. Under Secretary of State Rose Gottemoeller, in her turn, assured Kommersant that the White House "does not want to return to the logic of the Cold War, when there was a vicious cycle of measures and countermeasures."

The business magazine Expert continues to monitor the progress of the G7 summit in Bavaria. The leaders of the member states have made it clear that they would not object to a return to the old format and the resumption of Russian participation in the club, but only in exchange for a revision in its political line.

The magazine explains that Moscow is being asked to return to the previous system of a “subservient” relationship with the European Union.

In his turn, Russian President Vladimir Putin has repeatedly stressed that this kind of relationship is no longer possible, which was exactly what caused Russia's adherence to principle on the issue of sanctions.

According to Expert, Russia has made it clear to the West that if the EU and the U.S. continue to ignore the need to begin a dialogue with Moscow on new, post-Crimean conditions, Russia has no choice but to deepen its dialogue with China. It will be possible to get out of this circle only when the EU and the United States morally recognize the failure of the previous model of relations with Russia and the need to work according to a new one, the magazine adds.

In addition, Expert notes, the G7 countries have called for an extension of sanctions until the complete fulfillment of the Minsk peace agreement, which, as it is well-known, depends also on the conduct of Kiev. This is unlikely to suit Moscow and prompt it to act constructively.

However, on the other hand, the West will avoid steps aimed at the escalation of the conflict. For example, the EU and the U.S. are not going to meet Kiev's desires on the issue of sending peacekeepers, while the Americans have once again made it clear that they do not consider the direct supply of arms to Ukraine an expedient step, writes the magazine.

Former Florida governor Jeb Bush is to visit Europe to assure it of his support ahead of the U.S. presidential election, the centrist newspaper Nezavisimaya Gazeta reports. Bush, who is expected to announce his plans to run for the presidency in mid-June, plans to visit Germany, Estonia and Poland.

According to opinion polls, foreign policy issues will be all the more important in the upcoming presidential election, which is a little off the general trend, says the newspaper.

The Americans have traditionally been more concerned with the problems of their own country, tax issues, migration, and the creation of new jobs. But the turbulent global situation will force the candidates to adjust their approach in this area, too, writes Nezavisimaya Gazeta.

"Governors who run for the presidency are always accused of knowing their own state but having a poor understanding of the world situation, so Jeb Bush has decided to demonstrate that he is a world-class leader," said Valery Garbuzov, deputy director of the Institute for the U.S. and Canadian Studies at the Russian Academy of Sciences, in an interview with the newspaper.

According to him, the main purpose of the trip is to demonstrate to voters that Bush has a good knowledge of European problems. Garbuzov believes that the meetings will concern both Russia and NATO, as well as the new momentum toward North Atlantic solidarity. The expert did not rule out that Democratic presidential candidate Hillary Clinton may soon make a similar visit. 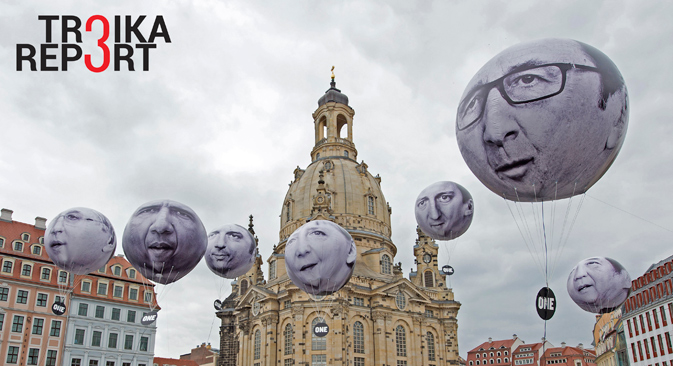