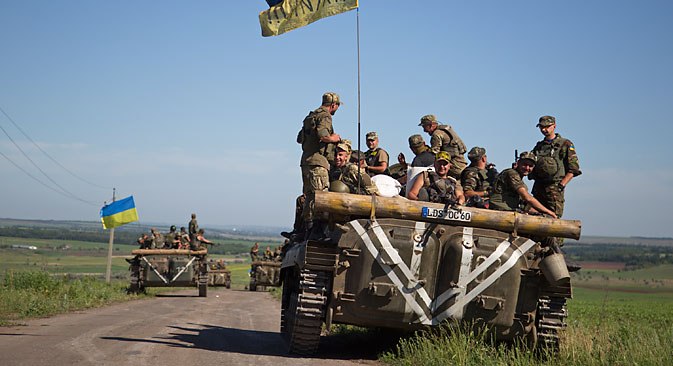 Ukrainian servicemen ride on an armored military vehicle not far from the city of Artemyevsk in the Donetsk region, June 9, 2015. Source: EPA

RBTH presents a selection of views from leading Russian media on international events, featuring reports on the latest round of Ukraine peace talks in Paris, U.S. President Barack Obama’s admission that he does not have a strategy for fighting ISIS in the Middle East, and news that Iran has dispatched troops to help Damascus in its fight against the Islamic militants.

In anticipation of the June 10 meeting in Paris between the deputy foreign ministers of Russia, Ukraine, Germany and France, who will review the implementation of the Minsk peace agreements, the Kommersant newspaper writes that on the eve of the talks, peace in the Donbass region of eastern Ukraine has been subjected to a critical test: During the recommencement of military action OSCE Special Representative to Ukraine Heidi Tagliavini announced her resignation. Russian experts interpret her departure as yet another indirect indication that the situation in the Donbass is getting out of control.

While those involved in the peace talks are trying to hold back the region from falling back into full-fledged conflict, the administrations of the Donetsk and Lugansk “people’s republics” in eastern Ukraine have proposed to regulate one of the most complicated issues: the status of the self-proclaimed republics.

Under the proposals, Kiev must agree to guarantee the regions' financial independence and the Ukrainian government must sign a separate agreement with the republics on economic, social and cultural development. Kiev will have the prerogative to appoint judges and prosecutors on these territories, but in return it will have to agree to the creation of a "people's militia," thus legalizing the armed groups that are now fighting against Ukraine. Moreover, the document mentions the constitutional consolidation of Ukraine's non-aligned status.

However, even though the leaders of the DNR and LNR have expressed their readiness to recognize the Donbass as "an unalienable part of Ukraine," Kommersant's sources in Ukrainian President Petro Poroshenko's administration are very skeptical about the initiative, the newspaper sums up.

The centrist newspaper Nezavisimaya Gazeta reports that the fight against Islamic State (ISIS) militants has become an important concern for U.S. President Barack Obama. During the G7 summit in Bavaria, Obama once again uttered the phrase that last year engendered a storm of criticism: "We still do not have a strategy to fight ISIS."

The president's critics believe that Obama has no idea of the scale of the problem in the Middle East and lacks the political will to carry out the necessary steps to solve it. In defense of the American leader, Nezavisimaya Gazeta remarks that his words on the absence of a strategy are the result of inadequate cooperation with the Iraqi government, while the ranks of ISIS fighters are growing faster than the international coalition is able to eliminate them.

"It is necessary to create a system for exchanging intelligence," said Russian historian Georgy Mirsky, "because fighting ISIS with mere airstrikes is completely impossible, and the coalition members understand this perfectly well."

The world community must first undermine the militant group’s financing, argues Mirsky. The war being waged by “the Caliphate” is very expensive; its domestic resources will soon be exhausted. Ordinary Muslims often sympathize with ISIS, thinking that it is the only force capable of countering the U.S. and Israel, and therefore support the group financially.

According to Mirsky, to solve the ISIS problem, a coordinated effort involving as many countries as possible is needed. Russia can help, for example, by using its influence on Iran. But the current tension between the U.S. and Russia is impeding this, while the West cannot permit itself to "trade" the fight with ISIS for the cancelation of the sanctions introduced against Russia over the situation in Ukraine, writes Nezavisimaya Gazeta.

Business magazine Expert writes that Tehran has promised to support its loyal ally Syrian President Bashar al-Assad to the very end. Iranian President Hassan Rouhani's words were not an empty promise. According to western special services and a number of regional mass media sources, Iran has sent a 15,000-troop contingent to Damascus.

Iran's justification for its first direct involvement in the four-year civil war in Syria is the military-defensive agreement that Tehran signed with Damascus back in 2006. Expertsays that the involvement of Iranian troops in the conflict is now not only completely justified, but is also necessary for Assad's regime. After a year of relative success, when it seemed that his side had been winning the civil war, the situation has turned against him: The radical opposition is overpowering his troops on all fronts.

Of course it is still too early to speak of the last days of Assad's regime, but the government, which has lost practically all its sources of income, is losing its strength. Moreover, after four years of fighting, the government army has decreased in size and the regime is becoming more and more dependent on mercenaries from various countries.

The advance of government forces, reinforced by Iranian troops, may begin this week. Furthermore, there is another reason why Iran sent the contingent now: Teheran hopes to achieve military success in Syria before the end of June, when the deadline for signing the agreements on its nuclear program expires. Success in Syria will give Iran room for maneuvering in the talks, Expert concludes.