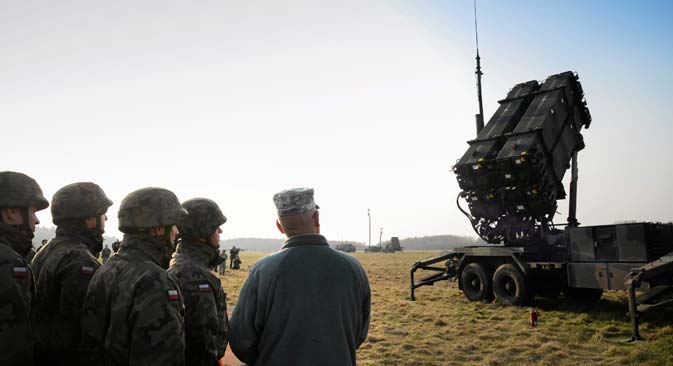 The Kommersant business daily reports that the United States may deploy heavy weapons in Eastern Europe “as a deterrence against a possible Russian aggression.” The news was first reported by The New York Times, citing sources in the U.S. and NATO leadership and describing the new deterrence plan as “the biggest since the Cold War.” Kommersant adds that these reports are further verified by statements from East European officials, confirming their readiness to accommodate U.S. military hardware and depots on their territory.

Although the new U.S. plan for bolstering its allies’ security has not yet been officially approved, its adoption may take place very shortly, ahead of the NATO defense ministers’ meeting set for June 24-26, writes the newspaper.

For his part, a senior source at the Russian Defense Ministry told Kommersant that plans to deploy U.S. military hardware in Eastern Europe were “a serious destabilizing factor.”

“We view it as the first step that our partners are taking to revise the provisions of the Russia-NATO act,” he said. Kommersant explains that the Founding Act on Mutual Relations, Cooperation and Security between NATO and the Russian Federation forbids the alliance to deploy “substantial combat forces” on its eastern flank.

Experts polled by Kommersant point out that if this plan goes ahead, Moscow will have to deploy its own offensive potential along the border with the Baltic states.

“As a result, the Baltic countries will not only fail to feel more secure but will end up as hostages in the standoff between the U.S. and Russia,” Kommersant quotes the head of the Russian Academy of Sciences’ Center for Socio-Political research, Vladimir Yevseyev, as saying.

Putin and Erdogan discuss Syria crisis on sidelines in Baku

The Gazeta.ru news website reviews the outcomes of the meeting that Russian President Vladimir Putin and his Turkish counterpart Recep Tayyip Erdogan held in the Azerbaijani capital Baku, where both leaders were attending the opening ceremony of the first European Games. The website points out that it was the two men’s first meeting after opposing public statements from their countries on the subject of the Armenian Genocide and after the parliamentary election in Turkey, in which Erdogan failed to strengthen his power base.

One of the topics that Putin and Erdogan were planning to discuss, according to a Kremlin statement issued ahead of the talks, was the situation in Syria, Gazeta.ru continues. It quotes a senior research fellow with the Russian Academy of Sciences’ Institute of World Economy and International Relations, Viktor Nadein-Rayevsky, as saying that in the Syrian conflict the two countries have found themselves “across the barricades”: Russia supports the government of Syrian President Bashar al-Asaad, while Turkey favors the Islamist opposition forces.

In the recent parliamentary election, Erdogan’s Justice and Development Party failed to gain an absolute majority, Gazeta.ru recalls. This marked an end to the Turkish leader’s plans to turn the country into a presidential republic and to boost his political capabilities. According to Middle East analyst Theodore Karasik, the fact that the meeting between Erdogan and Putin took place after the election in Turkey is of great significance.

“Erdogan’s dreams of creating a sultanate are now a thing of the past, which means that geopolitical and geo-economic relations between the two countries may change. This may have an impact not only on the situation with Turkish Stream [the gas pipeline to be built from Russia to Turkey via the Black Sea – RBTH] but also on Ankara’s policy as regards the Kurds, Syria and Iraq,” the pundit told Gazeta.ru.

The centrist newspaper Nezavisimaya Gazeta continues to follow the U.S. presidential campaign. Commenting on Hillary Clinton’s appearance in front of her supporters in New York, Nezavisimaya Gazeta points out that at this stage in the election race the Democratic Party is more concerned with a domestic socio-economic agenda than a foreign policy one.

If one were to compare Clinton’s speech with statements she made seven years ago, one would see that she has moved noticeably to the left and is not afraid of defending the interests of ordinary Americans, writes the newspaper. Furthermore, contrary to expectations, Clinton has not tried to distance herself from Obama, whom she described as an uncompromising fighter and a good leader.

Hillary Clinton spoke of foreign policy issues too: “No other country is better equipped to meet the traditional threats from countries like Russia, North Korea, and Iran,” Nezavisimaya Gazeta quotes her as saying.

“Clinton’s main task is to clearly outline her position in her speeches,” says the head of the Applied Research Center at the Russian Academy of Sciences’ Institute for U.S. and Canadian Studies, Pavel Sharikov. He points out that the Republican Party has many candidates and they have different positions, which leaves Clinton free to attack only the general Republican platform, rather than specific conservatives. Following the logic of the campaign, Sharikov continues, before the primaries Clinton should focus on criticizing her fellow party members. However, it appears that she is not at all bothered about the outcome of the primaries and is focusing instead on fighting her opponents from the other political camp, writes the newspaper.