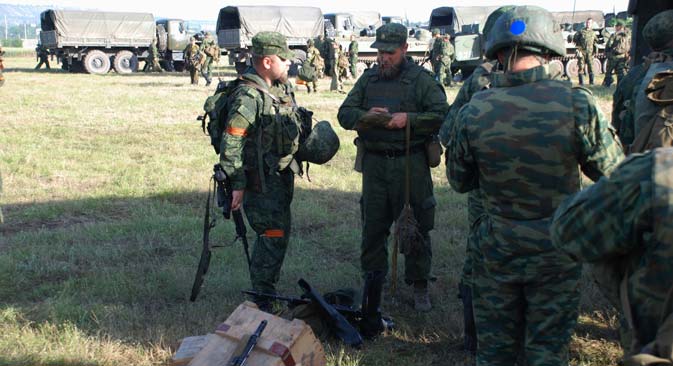 RBTH presents a selection of views from leading Russian media on international events, featuring reports on mysterious rumors of a Russian peace proposal for eastern Ukraine and Greece’s possible exit from the eurozone, as well as an update on the negotiations over Iran’s nuclear program.

The news website Gazeta.ru writes that according to Ukrainian media reports, Moscow has sent Kiev proposals for the settlement of the conflict in the Donbass region of eastern Ukraine, which include the unification of the unrecognized Donetsk and Lugansk “people's republics” with the territories in the Donetsk and Lugansk regions controlled by Ukraine. However, officials from Russia and Ukraine have denied the information.

Alexei Chesnakov, head of the Center for Political Conjuncture, said in comments to the website that Kiev may reach an agreement with the Donbass, but almost certainly not with Moscow. “It will be difficult to persuade the Rada [Ukraine’s parliament – RBTH] to take this option,” said Chesnakov.

Gazeta.ru describes the recent media reports as an “information heat-seeking missile.” It is likely that one of the parties to the conflict deliberately floated a trial balloon to determine the response of the opponent to such a scenario of conflict settlement, the website writes.

A Gazeta.ru source close to the Kremlin administration has confirmed that the Russian point of view on the problems of the Donbass has not changed.

“Moscow considers even a nominal return of the people's republics to Ukraine as a big concession. Kiev remains dominated by politicians who represent a ‘hawkish’ faction and are not ready to compromise,” said the source.

Ukraine may respond positively to the offer, if all the mercenaries are withdrawn from the Donbass, said Alexei Arbatov, director of the Center for International Security of the Institute of World Economy and International Relations at the Russian Academy of Sciences. On the technical side of the issue, one large subject is still a more logical entity than the current republics, said Arbatov.

In one of his speeches, Iranian President Hassan Rouhani has promised that the country will get a good nuclear deal, the centrist newspaper Nezavisimaya Gazeta reports.

According to the newspaper, Rouhani has devoted a lot of time to winning over ordinary Iranians; he is trying to convince residents skeptical towards the West that the agreement with the P5+1 group of six world powers (the U.S., Russia, China, the UK, France and Germany) will allow Iran to get rid of international sanctions, but will not undermine the prestige of the state.

According to the conservative part of the Iranian establishment, the government is making excessive concessions and is succumbing to Western pressure.

The negotiation process between the P5+1 and Tehran should be completed on June 30, but the most likely scenario is that the deadline will have to be postponed again, Nezavisimaya Gazeta notes. Of all the participants of regular consultations, only the U.S. is optimistic and continues to argue that the delay is not planned.

Meanwhile, Israeli politicians are alarmed by what they see as the excessive pliability of the six international mediators. According to Israeli Prime Minister Benjamin Netanyahu, the current terms of the agreement do not prevent Iran from being able to build an atomic bomb, but the lifting of sanctions will allow it to fill its coffers and support paramilitary groups in the region.

“For Iran, the question of the nuclear program is certainly a matter of prestige,” Vladimir Sazhin, senior researcher of the Institute of Oriental Studies at the Russian Academy of Sciences, told Nezavisimaya Gazeta about the situation surrounding the nuclear deal.

According to Sazhin, "if Iran complies with the requirements specified by the agreements, it will not stop its nuclear program, but it will significantly increase the time to work on the hypothetical creation of nuclear weapons." He also noted that significant progress in the signing of the final agreement was achieved under Rouhani, but this does not mean that it will be concluded on June 30.

Greece moves ever closer to exit from eurozone

The business magazine Expert reports that after the failure of another attempt by European officials to agree with the Greek government on June 14, even the most die-hard optimists have started talking about Greece’s impending exit from the eurozone.

Negotiators from the European Commission returned the reform plan proposed by Athens to their Greek counterparts, saying it was incomplete and therefore unacceptable, writes the magazine.

According to Expert, each unsuccessful round of talks brings a Greek default and the country’s exit from the Eurozone ever closer. Another “final” attempt is likely to be made later in the week, after a meeting in Luxembourg of the finance ministers of the single European currency area. It is possible that this will indeed be crucial in determining the future of relations between Greece and the euro, says the magazine.

The main obstacle to the achievement of a difficult compromise is now the defiance of Athens over pension reform. Greece's left-wing government, which continues to enjoy strong support in the country due to its intransigence, refuses to cut pensions, writes Expert, which believes it is clear that both Athens and Brussels will suffer massive losses from the exit of Greece from the eurozone.

The situation of the European Commission is further complicated by a psychological factor: The possible withdrawal of Greece from the eurozone will cancel out years of tough negotiations and almost a quarter of a trillion euros allocated to the Greeks for the implementation of two aid programs. This will be a very severe blow to the European single currency, says Expert.

Opinion: Why the collapse of the INF Treaty is not in Russia's interests