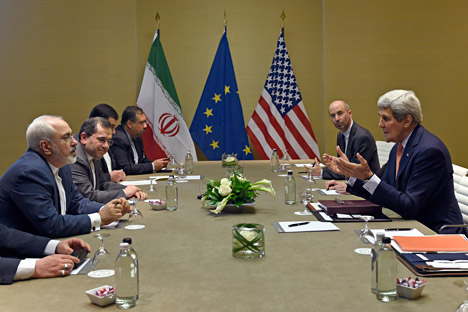 The settlement of the Iranian issue and the lifting of international sanctions will put an end to its international isolation. Source: AP

RBTH presents a selection of views from leading Russian media on international events, featuring a report on the approaching culmination of talks between the P5+1 and Iran on Tehran’s nuclear program, analysis of Greece’s eurozone future as time runs out for a deal with Athens’ creditors, and news of $1 trillion worth of contracts signed by Russia and China at the recent St. Petersburg Economic Forum.

The Kommersant business daily reports that the talks between the P5+1 (the U.S., UK, France, China, Russia plus Germany) and Tehran on the future of Iran’s nuclear program have entered their final stage, which is scheduled to be completed on June 30.

An expert with the Center for Policy Studies in Russia, Andrei Baklitsky, told the paper that the sides are yet to agree on a sequence of measures for lifting the sanctions currently imposed against Iran and a mechanism for reintroducing them should the deal be broken. In addition, the sides have not yet reached an agreement on investigating a possible military component to the Iran nuclear program in the past.

Although participants in the process do not rule out the possibility that the deadline for finalizing the deal may have to be moved, experts polled by Kommersant are convinced that the era of Tehran’s confrontation with the global community is nearly over.

The settlement of the Iranian issue and the lifting of international sanctions will put an end to its international isolation and will make Iran, which possesses the world’s fourth largest oil reserves and biggest gas reserves, a full-fledged member of the global economy, the paper continues.

Russia too may gain from the lifting of sanctions against Iran, despite the fact that in future Tehran could create serious competition for Moscow on the world’s energy markets. Once the Iranian nuclear crisis is resolved, it will be easier for Russia to implement large-scale projects in Iran, like for example the Bushehr-2 nuclear power plant, and to develop military and technical cooperation with Tehran. Over the next two years, Moscow may sign $2 billion worth of contracts with Iran, writes Kommersant, citing experts’ forecasts.

The centrist newspaper Nezavisimaya Gazeta reports  that Greece will once again engage in a dialogue with its international creditors at the upcoming EU summit: Its fate should be decided by the end of the month, otherwise the country may default on its debts.

In an interview for the paper, Yury Kvashnin, head of the EU studies section at the Russian Academy of Sciences’ Institute of World Economy and International Relations, expressed doubts that a deal will be reached at this summit. Having said that, he continued, any other options, like for instance Russia or China stepping in to help Greece, are unlikely. “Only the European Union can save Greece,” he said.

The troika of international lenders – the International Monetary Fund, the European Central Bank and the European Commission – expect Greece to carry out economic reforms: in particular, significant adjustments to the pensions system, value-added tax and a budget surplus, the paper writes.

According to Kvashnin, the Greeks will have no other choice but to make concessions to their creditors. “There are many options. The Greeks may try to cut salaries, carry out a one-off round of redundancies among public sector employees, or they could just shut down a number of loss-making state companies, of which there are many in Greece. However, from the point of view of the government, all these measures are equally bad,” he said.

The Gazeta.ru online publication reports  that 29 Russian-Chinese agreements worth a record-breaking $1 trillion were signed at the St. Petersburg International Economic Forum last week. Russia is trying to use China to make up for opportunities lost in relations with Western countries, says the website.

However, it should be borne in mind that Beijing is having serious economic problems of its own, warn experts polled by Gazeta.ru. One of the most widely discussed trends is the slowdown in China’s economic growth.

“Over the past five-six years, it has become obvious that productivity has begun to slow down,” says independent economist Andy Xie, adding that debts have begun to grow faster than GDP.

Furthermore, experts point out that China is half-way through a period of reforms. It is now trying to revise and change its drivers of growth, says executive vice-president of the Boao Forum of Asia Institute Yang Xiyu.