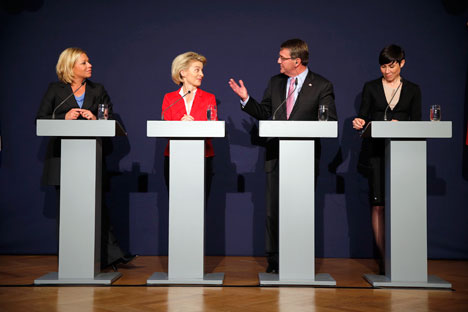 RBTH presents a selection of views from leading Russian media on international events, featuring reports on the meeting of NATO defense ministers in Brussels, Greece's attempts to reach an agreement with its international creditors ahead of a June 30 deadline, and Washington’s insistence that sanctions against Iran can be re-imposed if it breaks the conditions of the pending agreement on its nuclear program.

NATO has taken a number of steps to strengthen its military capabilities following a recent meeting of the alliance's defense ministers, the Russian business daily Kommersant reports.

The talks currently underway in Brussels showed that the implementation of the Readiness Action Plan, approved at a summit in Wales in September 2014, has entered a new phase, the newspaper writes.

In particular, it has been decided to triple the number of rapid reaction forces and expand the powers of NATO forces in Europe.

The alliance calls the innovations a “response to Russia's aggressive actions.” Both at the meeting and on its sidelines, the ministers noted that they were not against the restoration of relations with Russia in theory, but they cannot see ways of doing this in the context of the ongoing Ukrainian crisis, says Kommersant.

Athens almost certain it will reach compromise with creditors

The centrist daily Nezavisimaya Gazeta continues to monitor  the talks between the Greek delegation, its international creditors and EU representatives, called to solve the problem of Athens’ vast debts.

The newspaper reminds its readers that Greece must repay 1.6 billion euros it owes its creditors by June 30 or be declared in default. In addition, Athens has refused to accept a reform plan developed by the three major lenders – the International Monetary Fund, the European Central Bank and the European Commission.

The lenders, in turn, want Athens to cut taxes on business, increase VAT and progress with the reform of the pension system, writes Nezavisimaya Gazeta.

The Chairman of the European Council, Donald Tusk, said ahead of the EU summit that despite the great difficulties, the negotiations on the settlement of the debt crisis in Greece would be completed successfully.

“The creditors are making every effort to reach an agreement with Greece. At the same time, Brussels is well aware that to make concessions to Athens means to set a dangerous precedent, which could hit the Eurozone in the future,” Alexander Pukhayev, a reviewer at the internet portal Vesti Ekonomika, told Nezavisimaya Gazeta.

He noted that, given the growing downside risks to the global economy, Athens is also aware that it faces stalemate.

According to the newspaper, a step toward the creditors threatens Tsipras with a loss of power due to a breach of his key promise with Greek voters – not to reform the pension system. “In the end, those who are willing to take more risk will win. So far it is the Greeks who appear to be such a party,” said Pukhayev.

Washington insisting on option to re-impose Iran sanctions if necessary

Washington wants to ensure that the sanctions against Iran can be re-imposed if the country violates the terms of the agreement on its nuclear program, the signing of which is expected on June 30, the business magazine Expert writes.

The magazine says that the U.S. and its European partners are forcing a proposal that would block Russia's ability to prevent the Security Council from re-introducing sanctions against Iran, if necessary. The ability to re-impose the UN sanctions has been a prerequisite for the Americans from the very beginning of the latest talks with Iran on its nuclear program.

The U.S. plan looks like this: The agreement on Iran's nuclear program will include the establishment of a joint commission of representatives from the UK, China, France, Germany, Russia, Iran and the United States, i.e. all the countries that are presently participating in the negotiations. If the U.S. finds a violation of the agreement by Iran, it will raise a question about it before the commission.

In this case, two scenarios are possible; either Tehran somehow calms the anxiety and suspicions of the Americans or the UN sanctions will be re-imposed automatically.

If Russia wants to protect Iran from the possible re-imposition of sanctions, it will have to submit a resolution to the Security Council to overturn the decision of the joint committee, Expert notes. However, the United States will be able to use its veto power to block the adoption of the Russian resolution.