Press Digest: U.S. and Cuba to open embassies for first time since 1961 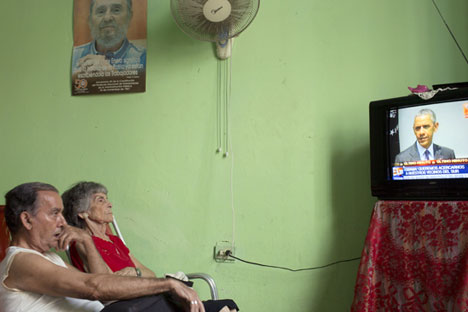 Negotiations about the restoration of diplomatic ties between the U.S. and Cuba have been ongoing since December 2014. Source: Alexandre Meneghini / Reuters

RBTH presents a selection of views from leading Russian media on international events, featuring reports on the restoration of ties between the U.S. and Cuba, the case of a high Russian official that was denied entry to Finland and Luxembourg’s ascension to the Presidency of the Council of the EU.

The business daily Kommersant writes that U.S. President Barack Obama is bringing one of the major foreign policy endeavors of his presidency to fruition: he has announced the restoration of diplomatic relations with Cuba, broken shortly after Cuba’s 1959 revolution.

Negotiations about the restoration of diplomatic ties between the U.S. and Cuba have been ongoing since December 2014, when the two countries' leaders, Barack Obama and Raul Castro, announced a reset. Since then, the White House has eased restrictions in the areas of tourism, trade and finance. The U.S. Department of State removed Cuba from the list of countries sponsoring terrorism, the newspaper adds.

The opening of embassies will be held on July 20, Kommersant reports. Before that, the State Department must notify Congress, which in turn must approve funding for the diplomatic mission from the state budget. Obama addressed the Congress urging it not to block the White House initiative. However, some Republicans have made it clear that they will put up resistance, the newspaper says.

Russian officials are demonstrating ostentatious calm about the rapprochement between Havana and Washington, the newspaper stresses. Speaking to Kommersant, Russian Foreign Minister Sergei Lavrov stated that, “the strategic partnership between Russia and Cuba is unshakable.”

2. Experts comment on Finland's refusal of visa for Naryshkin

Finland has denied entry to State Duma Speaker Sergei Naryshkin who was to chair the Russian delegation at a session of the OSCE to be held from July 5-9 in Helsinki, the tabloid newspaper Moskovsky Komsomolets reports.

Alexei Mukhin, the head of the Center for Political Information, told the newspaper that the actions of Finland do not reflect the opinion of the entire EU and suggested that the Finnish government was being led by the United States.

“It is not much more than a nuisance,” Mukhin said. “From a policy perspective, it is a miscalculation on the part of Helsinki. It will complicate the relations of [Russia] with Finland, but not with the EU.”

By contrast, Fyodor Lukyanov, editor-in-chief of the magazine Russia in Global Affairs, told the newspaper that this decision was connected both with Finland and with European policy. Lukyanov stressed that Naryshkin, who has been on the EU blacklist since March 2014, has attended international events in Europe, but that such a decision by Finland was a reaction to the publication of the Russian blacklist, adding that tit-for-tat responses are unfortunately a standard diplomatic procedure.

3. Luxembourg takes over the EU's presidency from Latvia

The centrist newspaper Nezavisimaya Gazeta ran an article about Luxembourg’s assumption of the Presidency of the Council of the European Union. This post is being passed to the tiny country from Latvia. The presidency operates on a rotating basis changing every six months and is represented by a national government rather than an individual.

Nezavisimaya Gazeta points out that Luxembourg will have to deal with a number of pressing issues during its presidency – illegal immigration, climate protection, economic growth and tax policy. But the main issue will, of course, be the debt crisis in Greece.

Furthermore, the newspaper adds, the European Union should reconsider the question of individual sanctions against Russian officials. “It's most likely that the sanctions will be extended,” Vadim Voinikov, associate professor of International and European Law at the Immanuel Kant Baltic Federal University, told Nezavisimaya Gazeta. This issue is unlikely to change because of Luxembourg, “as it carries out pro-European policy and does not object to these sanctions.”

He added that the issue of sanctions is related to an area where the leading role is played not by the country that holds the presidency of the EU, but the European Commission and the Council of EU foreign ministers.

Olga Potemkina, the head of the Department of European Integration of the Institute of Europe, noted that the presidency of Luxembourg is likely to be relatively favorable for Russia as they generally have a favorable impression of the country. “But still, Luxembourg will follow the general principles of EU policy,” she said.