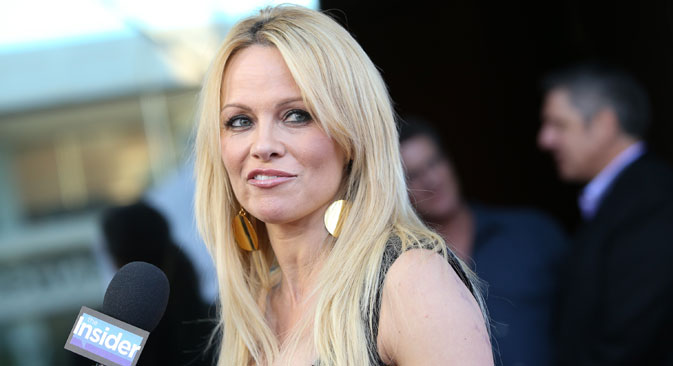 RBTH presents a selection of views from leading Russian media on international events, featuring reports on Russia’s reaction to Pamela Anderson's request to block the passage of a ship carrying whale meat to Japan, Kiev’s intention to introduce a new route and stiffer checks for Russian humanitarian convoys in Ukraine, and U.S. intentions to boost its military capabilities in air and space to counter Russian activity.

The Izvestia newspaper reports that Russia will not be able to grant a request by sex symbol-turned environmental activist Pamela Anderson. Earlier she had written an open letter to Russian President Vladimir Putin asking Russia to block the North Sea route of the ship Winter Bay, which is carrying 1.7 tons of fin whale meat from Iceland to Japan. The publication notes that permission has already been given.

Deputy Director of the Department of Biodiversity Preservation and Use of Animal Objects at the Russian Ministry of Environment Valery Fyodorov explained that Russia does not have any legal grounds for stopping the ship.

"In accordance with the UN Convention on the Law of the Sea we have freedom of navigation. What, are we going to punish people for acts committed on the territory of another country?" said Fyodorov. In his words, it is the authorities of the country in which the fin whales were killed that should concern themselves with the problem. Fyodorov clarified that the ship can be detained only in the event it enters a Russian port.

Izvestia reminds its readers that the International Whaling Commission, whose moratorium Anderson had referred to, made an announcement in the western press that Russia, as a member of the commission, can block the Winter Bay's route and should therefore heed the actress's cry. However, Russia is not participating in the moratorium.

The Kommersant business daily reports that the Ukrainian government is thinking of radically changing the scheme of delivering Russian humanitarian aid to the Donbass region of eastern Ukraine, where a war between Ukrainian government troops and Russian-backed rebels has been going on for over a year. The document has been given to the Russian side within the framework of the special contact group on regulating the situation in eastern Ukraine. Kiev is insisting that the cargo be delivered via railroad and not via humanitarian truck columns and that detailed information on their contents be presented to the Ukrainian government one week before being shipped. The document also says that representatives of the International Red Cross or other organizations should participate in the inspection and delivery of shipments.

Alexander Chernenko, a deputy in the Petro Poroshenko Bloc party, told Kommersant that Ukraine is worried about the absence of control and accounting due to the fact that, in his opinion, "often Ukrainian state property is illegally taken out of the country, such as stolen parts of Ukrainian factories," while "contraband and weapons" are brought in.

Vladislav Deinego, a representative of the self-proclaimed Lugansk People’s Republic within the contact group, doubts the necessity to change the current scheme. "Today Ukrainian customs agents have every opportunity to inspect the convoys," he said.

Russia has still not reacted to Ukraine's proposal.

In an article titled “America preparing for Star Wars,” the centrist newspaper Nezavisimaya Gazeta writes that the United States intends to significantly bolster its air force and space potential with the pretext of countering Russia's military activity. This conclusion is based on recent announcements made by Secretary of the Air Force Deborah James and Chairman of the House Armed Services Strategic Forces Subcommittee Mike Rogers. The politicians believe that Russia currently constitutes the main threat to U.S. national security and are calling on the Obama administration to increase the military budget and consider the possibility of placing antimissile defense systems in space.

In turn, Russia is convinced that it is precisely the country's air-space sphere that is vulnerable, which is why this issue is of special concern for the Russian government at the moment. Citing Deputy Prime Minister Dmitry Rogozin, the publication explains that Russia is currently restoring orbital units that form part of its missile attack early warning system. "This issue will be resolved by 2020 with the creation of the United Space System (USS)," said Rogozin.

Nezavisimaya Gazeta adds that the development of the USS is only in its early stages and that its first launch is scheduled for November 2015. 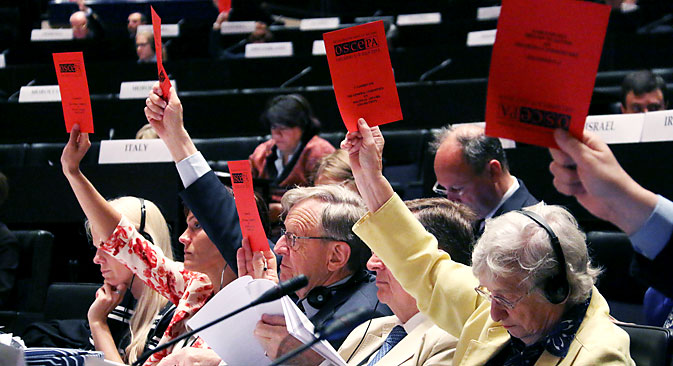