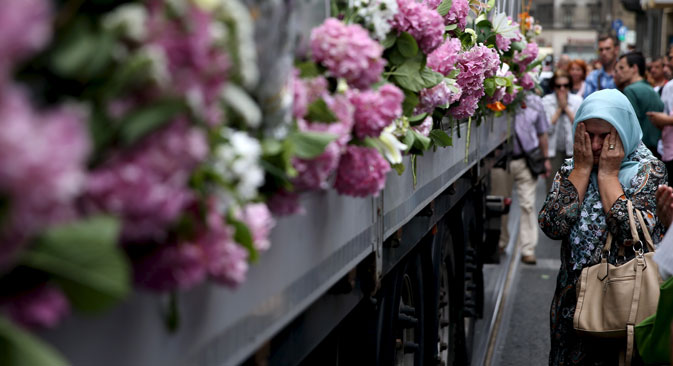 A woman cries beside a truck carrying 136 coffins of newly identified victims of the 1995 Srebrenica massacre, in front of the presidential building in Sarajevo, July 9, 2015. Source: Reuters

Russia has vetoed a UN Security Council resolution that would have described as “genocide” the Srebrenica massacre committed by Bosnian Serb forces against Muslims during the Bosnian War in July 1995. Russian experts interviewed by RBTH believe that, despite the enormity of the crime, there are insufficient grounds to consider the killings an act of genocide.

Russia has blocked a UK-drafted UN Security Council resolution on the Srebrenica massacre of 1995 that would have classified the mass killing of Bosnian Muslims as an act of genocide.

Russia was the only country to veto the resolution, with China, Nigeria, Angola and Venezuela abstaining and the remaining council members voting in favor.

The document aimed to mark the 20th anniversary of the slaughter of 8,000 Bosnian Muslim men and boys by Bosnian Serb forces on July 11, 1995 after the capture of the town of Srebrenica in eastern Bosnia, and argues that the failure until now to recognize the massacre as genocide is hindering reconciliation in Bosnia and Herzegovina.

On July 11, 1995, the Bosnian Muslim enclave of Srebrenica, designated as a UN "safe area," was stormed by Bosnian Serb forces. Over the course of the next three days, according to the International Criminal Tribunal for the former Yugoslavia, around 8,000 Bosnian Muslim men and boys were separated from the women and girls and massacred, in what has been described as the bloodiest crime in Europe since the Holocaust.

The slaughter in Srebrenica was the worst of a series of mass killings of local Muslims in eastern Bosnia during the war of 1992-1995, in which Bosnian Serb forces under the command of General Ratko Mladić waged a campaign of ethnic cleansing in the country after Bosnia’s declaration of independence from Yugoslavia, which had been opposed by Bosnia’s large Serbian population. The territory carved out by the Bosnian Serbs is known today as the Republika Srpska, a de facto autonomous entity occupying 49 percent of Bosnia and Herzegovina.

The massacre in Srebrenica has previously been identified as an act of genocide in several decisions by international courts, with UN Secretary General Ban Ki-moon making recent comments to the same effect. However, the two Russian experts interviewed by RBTH believe that in the case of Srebrenica, it is difficult to speak of genocide, claiming it is a broader phenomenon.

“Srebrenica was, of course, a terrible crime ... [but] I personally would not call it genocide,” Alla Yazykova, head of the Center of the Black Sea and the Mediterranean at the Russian Academy of Sciences’ Institute of Europe, told RBTH, claiming that the nation’s gene pool had not sustained the irreparable damage that in her view would qualify the massacre as genocide.

Pavel Kandel, head of the Section of Ethno-Political Conflicts at the Institute of Europe and an expert on the Balkans, also believes that it is impossible to talk about genocide in this case, since there was, he claims, no intent to destroy an entire ethnic group. Kandel emphasizes that the Serbs do not deny this crime, but refuse categorically to consider it genocide.

In 2011, General Ratko Mladić, who was allegedly responsible for ordering the operation in Srebrenica, was arrested in Serbia and brought before the International Court of Justice in The Hague, where he is currently on trial on various charges of crimes against humanity, including genocide (one charge specifically refers to Srebrenica), murder, forcible deportation and terror against civilians.

The U.S. ambassador to the UN, Samantha Power, condemned Russia's veto, describing Moscow’s decision as a further stain on the record of the UN Security Council and saying it was heartbreaking for the families of the victims of the crime.

Vitaly Churkin began his speech at the Security Council with a moment of silence in memory of “all the victims of the atrocious crimes committed in and around Srebrenica two decades ago,” yet he conspicuously avoided direct reference to the perpetrators of the massacre.

Instead, he said that the approach is not admissible when “of all war crimes, only one is singled out,” and the “blame for the past is placed basically on one people,” referring to the Serbs – a nation with which Russia shares close historical and religious ties.

Stability in Bosnia and Herzegovina

Explaining Russia's decision, Churkin talked about the threat of undermining the stability of Bosnia and Herzegovina through careless handling of the issue, which has become the “subject of considerable controversy” in the country.

Churkin referred to the requests of the Serb representative in the leadership of Bosnia and Herzegovina and the president of Republika Srpska, who asked the members of the Security Council and the UN Secretary-General not to accept the resolution. According to Pavel Kandel, by blocking the resolution, Russia has made a “political gesture towards the Serbs, primarily the Bosnian Serbs.”

Earlier, Milorad Dodik, the president of Republika Srpska, was reported to say that the adoption of the document would mean the collapse of Bosnia and Herzegovina.

Alla Yazykova agrees that the adoption of a resolution condemning the genocide in Srebrenica could lead to instability in Bosnia and Herzegovina, citing the existence of “very complex relationships between the different parts” of the country.

The experts interviewed by RBTH pointed to yet another reason for Russia’s decision to veto the resolution – the use of the word “genocide” itself, which is fraught with serious legal and political consequences for states and nations accused of this crime.

Churkin, while voicing his disagreement with the British draft, noted that it contains “concepts not agreed on an international level” that threaten “interference in the internal affairs of the state.” 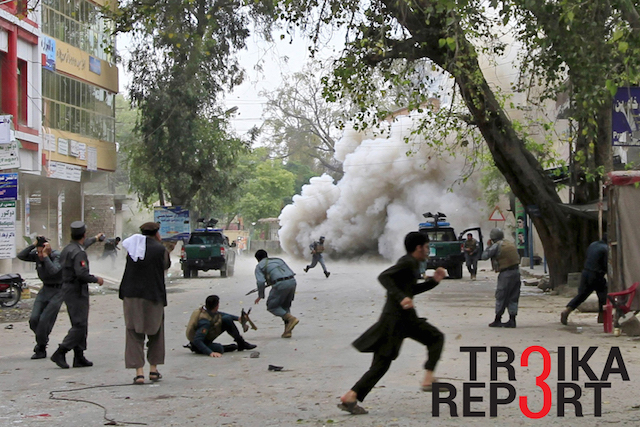