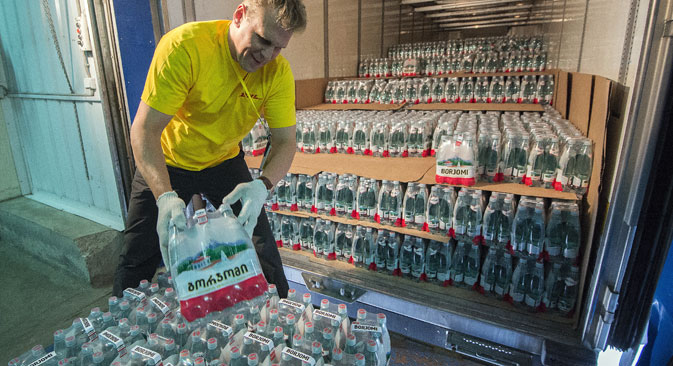 RBTH presents a selection of views from leading Russian media on international events, featuring reports on Georgia’s efforts not to antagonize Russia over EU sanctions, Gazprom’s sale of its European assets, and accusations by Russian authorities in Crimea that the Crimean Tatars are forging ties with ISIS.

The online newspaper Gazeta.ru reports that Georgia is trying to please both the European Union and Russia. After the EU's official announcement saying that Tbilisi had supported the economic sanctions against Russia, Georgian officials hastened to deny the fact.

Georgia's attempt to keep its foot in both camps is understandable: The country again risks losing Russia's profitable market. The newspaper remarks that Georgian officials are being deceitful when they say that commodity turnover between Georgia and Russia is insignificant for Tbilisi if seen in an EU context: It is worth hundreds of millions of dollars.

According to the Georgian Statistics Service, Russia is ranked fourth among the country's trade partners. In the 2012-2014 period export to Russia grew by six times. In 2015, however, the volume of supplies declined substantially, which is probably due to the political contradictions between the countries.

Gazeta.ru writes that the intensification of sanctions, if it happens, will hit Tbilisi hard, while in Russia only airlines will be affected, since the volume of Tbilisi-Russia flights has been growing. Andrei Kramarenko, a senior collaborator at the Higher School of Economics in Moscow, pointed out that there is a big Georgian diaspora in Russia.

Gazprom selling off European assets as part of restructuring plan

The Vedomosti business daily, citing a report prepared by Gazprom Germania (a branch of Gazprom Export that owns almost all of Gazprom sales structures abroad), writes (LINK: ) that Gazprom is restructuring its foreign assets. The report says that this is happening "due to changes in economic and political conditions," without mentioning the assets in question.

Vedomosti sources say that for now the sale deals with Russian gas giant’s assets in the Baltic States. In June 2014 Gazprom had sold 37.1 percent of the Lithuanian gas companies Lietuvos Dujos and Amber Grid for $163 million to the state. On June 19 the Estonian state-owned Elering announced that it was buying Gazprom's 37-percent stake in gas transmission network Vorguteenus Valdus for $20 million. Gazprom also owns 34 percent of Latvian company Latvijas Gaze.

It is possible that by 2017 Gazprom will also sell these assets, believes Deputy Director of the National Energy Security Foundation Alexei Grivach. The recently adopted EU Energy Strategy presupposes the reduction of dependence on Russian gas, noted one of Gazprom's European partners (currently the Baltic States are almost 100-percent dependent on Gazprom). But Grivach also believes that the sales will not be limited to the Baltic States and Northern Europe – the same may happen in Germany.

The centrist newspaper Nezavisimaya Gazeta reports that the ex-directorate of the Mejlis of the Crimean Tatar People, the representative body of the peninsula’s ethnic Tatars, is being accused by the Russian authorities in Crimea of wanting to start a hybrid war as the Universal Congress of Crimean Tatars commences in Ankara, Turkey.

However, Vice Prime Minister of Crimea Ruslan Balbek claims that the gathering of diaspora leaders in Turkey, which starts on Aug. 1, will be the beginning of the preparation of the invasion of Crimea by members of the Islamic State (ISIS) radical group with military experience obtained in Syria.

On his Facebook page Balbek wrote that Mustafa Djemilev, president of the Mejlis of the Crimean Tatar People between 1991 and 2013, "is putting together a battalion with volunteering radicals that will be launched into Crimea" and "is helping to recruit militants for Islamic State in Ukraine."

Andrei Nikifirov, director of the International Affairs Department at the Vernadsky Crimean Federal University, said that "that part of the Crimean Tatar National Movement which is embodied by Djemilev and Chubarov (the Mejlis' current president) has noticeably radicalized its position in recent years." Obviously, such a threat cannot but concern the Crimean government and security forces, remarked Nikifirov.

In turn, President of the Crimean-Tatar Milli Firka Party Vasvi Abdraimov believes that the event in Ankara will be fully used against Russian and Crimean policy and "the global integration processes within the framework of the SCO [Shanghai Cooperation Organization]."

Read more: Can Moscow bet on ‘Trump card’ in U.S.?