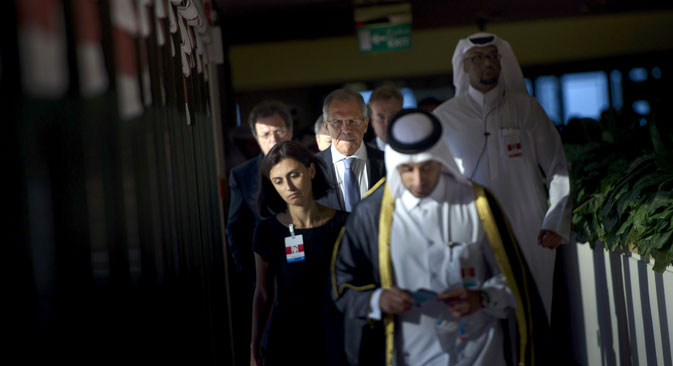 Russian Foreign Minister Sergei Lavrov has outlined a Russian initiative for the formation of a united force intended to combat the rise of ISIS militants in Syria and Iraq. However, Russian analysts say that Moscow’s proposal, presented at a meeting of foreign ministers from Russia, the U.S. and Saudi Arabia in Doha on Aug. 3, is unlikely to see support from the Americans and their regional allies.

Moscow has proposed the creation of a united front to fight against the Islamic State militant group (ISIS), which would include, in addition to the Iraqi and Kurdish forces, Syrian government troops loyal to President Bashar Assad, bringing all anti-jihadist forces together into a coalition.

Russian Foreign Minister Sergei Lavrov disclosed details of the Russian plan for the first time at a meeting of foreign ministers from Russia, the U.S. and Saudi Arabia in the Qatari capital Doha on Aug. 3. The plan was first mentioned by Russian President Vladimir Putin in late June of this year.

The Russian proposal aims to unite the efforts of the Syrian and Iraqi armies, Kurdish militias and other regional forces. However, the big stumbling block here is the question of the fate of the regime of Syrian President Bashar al-Assad, whom the United States and a number of Gulf States want to remove from power yet is a staunch ally of Moscow.

Lavrov said in Doha that Moscow feels that the use of “only air strikes (conducted against ISIS by U.S.-led coalition forces) is insufficient,” and that “it is necessary to form a coalition of like-minded people, including from those ‘on the ground’ with weapons in hand fighting against this terrorist threat.”

“And that includes the Syrian and Iraqi armies and the Kurds,” he said. According to a statement released by the Russian Foreign Ministry, the coalition against ISIS must be formed on “a coherent international legal basis,” which means only with a UN Security Council mandate.

Lavrov said that the question of Russia’s support of Assad is no longer relevant, since at recent meetings held in Geneva on the Syrian issue, “the international community, including members of the UN Security Council, Turkey, the EU, and the Arab countries, agreed to a transitional political period, and not to a regime change in Syria...”

It is not yet clear how the other participants of the meeting reacted to the Russian proposal. According to Yevgeny Satanovsky, president of the Institute of the Middle East, an independent research center, this was something that everyone expected from such a meeting – given the current international environment.

According to Satanovsky, the course that the Americans are on a course that does not allow for a change in attitude towards the regime of President Assad, thus making it impossible to implement the Russian plan. He said that Washington had “received an order to overthrow Assad” and “one of these ‘clients’ is Saudi Arabia.” In this light, said Satanovsky, a breakthrough on Syrian should not be expected.

The analyst believes that even the growing threat from ISIS will not have an impact on the U.S. approach to the ruling regime in Syria, since the activities of ISIS do not directly threaten the interests of the United States.

Despite appeals from Moscow, it has now become clear that Washington is actually toughening its position against the Assad regime. Now, the United States will be militarily defending the “moderate” Syrian opposition, which it has trained, in the event of attacks on them not only by ISIS militants, but also by Syrian government troops.

According to a Pentagon announcement on Aug. 3, “defensive fire support” was provided on July 31. The targets of this “support” were militants linked to the Al Qaeda extremist organization – the Al-Nusra Front. The Pentagon said that this “fire support” from the air would be provided “regardless of who attacks them, [militants of the “moderate” Syrian opposition] or who they attack”.

In Doha, Lavrov called this approach illegal from the point of view of international law, stressing that it constitutes an obstacle to the formation of a united front to counter ISIS.

He also noted that “the most important thing here is that, so far, as events have proven, the vast majority of the so-called ‘moderate’ opposition militants, trained in neighboring countries by American military instructors, have ended up fighting on the side of the extremists.”

“I do not think I was able to shake the U.S. position, but we clearly disagree on this issue,” the Russian minister concluded. 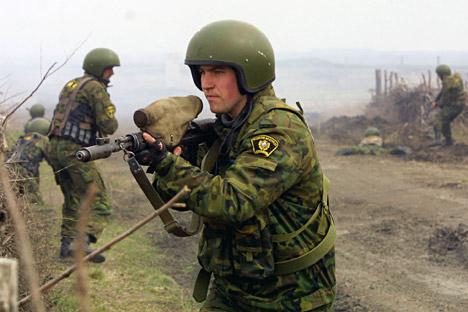