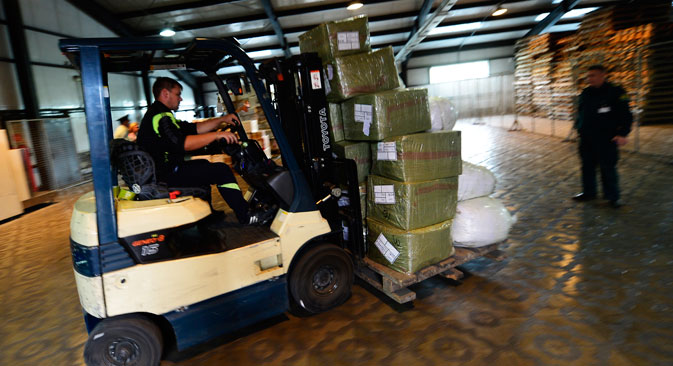 A forklift driver at work at a temporary storage facility at Pogranichny crossing on the Russian-Chinese border, Aug. 3, 2015. Source: Yuri Smityuk / TASS

RBTH presents a selection of views from leading Russian media on international events, featuring reports on a fall in the volume of trade between Russia and China and the low productivity of Russia’s workforce, as well as analysis of the future of the Turkish Stream gas pipeline.

During the first six months of 2015, the volume of trade between China and Russia decreased by 28.9 percent compared to the same period last year, amounting to $37.72 billion,the Russian centrist daily Nezavisimaya Gazeta reports, citing the Chinese news agency Xinhua.

Chinese exports to Russia fell by 36.1 percent, while imports of Russian goods to China decreased by 20.7 percent, writesthe newspaper, noting that these results are not in line with the plans of the Russian government.

"We will definitely reach the turnover of 100 billion dollars next year," Russian President Vladimir Putin said at a meeting with the Premier of the State Council of the People's Republic of China, Li Keqiang, in October 2014.

These circumstances, according to Nezavisimaya Gazeta, do not create a particularly optimistic backdrop for talks involving Putin scheduled to take place as part of the “Russia-China: Two Countries – One Way” (BIEF-2015)economic forum, to be held in in Beijing in early September.

Meanwhile, Head of the Department of Oriental Studies of the Higher School of Economics, Alexei Maslov, told the newspaper that the “decline in Russian-Chinese trade is a normal and predictable phenomenon that can be explained by the crisis in thestructure of trading,which in many ways is exhausted.”

According to Maslov, the restoration of past trade relations is impossible due to the decline in in Russians' purchasing power, as well as the relative reduction in demand of China for oil and gas. However, Chinese may be interested in the Territories of Priority Development (TPD) proposed by Moscow in the region of Khabarovsk and Vladivostok in the Russian Far East, he said.

Economist Ruslan Grinberg, who is the head of the organizing committee of the forthcoming BIEF-2015 forum, told Nezavisimaya Gazeta that he was optimistic about the new joint Russian-Chinese infrastructure projects in the Russian Federation, and the recruitment of Chinese in the transport and housing construction sectors in Russia.

According to Russian gas giant Gazprom, the laying of Turkish Stream's four pipelines will cost €11.4 billion, the website Gazeta.ru reports, calling on a number of experts to offer their opinions on the future of the project, which aims to supply Russian gas to a distribution hub in Turkey via the Black Sea.

Industry experts have repeatedly expressed the opinion that even if the Turkish Stream project is implemented, it will be limited to a single pipeline. According to the experts interviewed by Gazeta.ru, this is due to the ongoing delay in Russian-Turkish negotiations, as well as the fact that the Turkish Stream project is opposed by Europe and the U.S.

RusEnergy partner Mikhail Krutikhin specified that the sum published by the company only includes the cost of the marine part of the pipeline. However, according to experts, even these figures are subject to serious doubt.

“Upon completing construction, Gazprom has never complied with the planned expenditure on gas pipelines,” said Krutikhin, who suggests that Turkish Stream will be implemented only partially.

“If Gazprom will be able to build Turkish Stream, the gas pipeline will have no more than one line,” he told Gazeta.ru.

Labor productivity in Russia in terms of hours of work is almost half that of Greece, and almost 2.5 times less than in Germany, the business daily Kommersant reports, citing data from the Organization for Economic Cooperation and Development (OECD).

Russia is lagging behind in terms of wages as well, writes Kommersant. The average wage in Russia among developed (according to the OECD) countries is comparable only with Mexico. At the same time, the OECD points out, Russia is one of the leaders in the number of hours worked, the newspaper reports.

“The fact that Russia's labor productivity is three or four times lower than the average European – and even more so in some branches – is due to the poor standard of technical equipment atworkplaces and professional training, as well as the practically non-existent stimulatory function of salaries in the real sector,” Andrei Korovkin, from the Institute of Economic Forecasting at the Russian Academy of Sciences, told Kommersant.