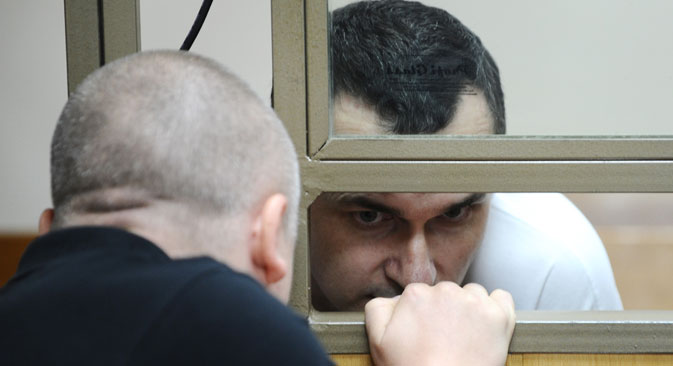 The Ukrainian film-maker Oleh Sentsov in the North-Caucasian District Military courtroom, Rostov-on-Don, the venue of initial hearings on the acts of terrorism in Crimea, Aug. 25. Source: RIA Novosti/Sergey Pivovarov

RBTH presents a selection of views from leading Russian media on international events, featuring reports on the controversial verdicts in two high-profile Russian trials, an agreement between Airbus Defense and Space and the Russian Space Systems Corporation, and a recent poll of attitudes toward illegal immigrants.

The Vedomosti business daily reports on the verdicts pronounced yesterday by the Russian courts in two high-profile trials. The publication notes that while an amazing sense of humanism was revealed in one case, the other demonstrated extreme severity.

The first involved the district court of the Vladimir Region, which decided on an early release for Yevgeniya Vasilieva, who had been convicted of large-scale embezzlement of government funds. Having received a five-year prison term, Vasilieva served slightly more than half of the term, and most of that time was spent under house arrest, in which the former Defense Ministry official was able to walk around Moscow and visit her favorite shops, writes Vedomosti.

In the other case, the North Caucasus district military court sentenced Ukrainian filmmaker Oleh Sentsov to 20 years in jail for having organized a terrorist act. His accomplice, Olexander Kolchenko, was sentenced to 10 years.

Vedomosti notes that Sentsov's case is striking in its demonstratively severe verdict. The director had not intended to blow up a railway station and kill dozens of people or place a bomb under an important building. According to the investigation, he set the Party of Regions' Crimean office on fire during the night (there were no victims) and planned to blow up a statue of Lenin. The office had become the local branch of the United Russia party following Russia’s seizure of the Black Sea peninsula in March 2014.

The purpose of the Sentsov case is to frighten people with the omnipotence of the special services, writes Vedomosti. Meanwhile, Vasilieva's release is a spit in the face to people who had hoped that the case would turn into a systematic fight against corruption in the government's highest echelons.

Airbus setting up shop in Russia

The daily broadsheet Izvestiya reports the sensational news of the agreement between Airbus Defense and Space (ADS) and the Russian Space Systems Corporation (RSS), which was signed on Aug. 26 at the MAKS Air Show near Moscow.

According to the document, the production of equipment for navigating satellites, apparatuses for remote sensing of the Earth and communications satellites will take place in Russia. Head of RSS Andrei Tyulin said that Airbus Defense and Space and his company have already agreed on the items that Russia will produce and that Airbus representatives will soon visit the production premises in Moscow.

"We immediately agreed with Airbus that our products will not only be placed on the Russian market, but will also be exported," said Tyulin.

According to a Levada Center survey, reports the RBK newspaper, a record number of Russians has become accepting of illegal immigrants. Two out of five (41 percent) of those interviewed by sociologists in August believe that illegal immigrants from countries bordering Russia should be legalized, helped with finding work and helped in the assimilation process. The publication says that this level of acceptance is unprecedented. Last year the percentage of those sharing this view was twice as low (19 percent) and in 2006 it fluctuated between 15 and 35 percent.

The change in Russians' mood is due to the decline of immigration problems in the public sphere, writes RBK. There has been an absence of high-profile events related to issues of national identity and in general the media's attention to these issues has decreased.

The survey results demonstrate that Russians on the whole have become more indifferent to foreigners, remarks member of the Presidential Council on Human Rights Alexander Verkhovensky. "And this is a good indicator, because the fewer emotions there are, the more the head functions. The question is only how stable will this level of indifference be?"

On the other hand, twice as many people in the last six years have come to view the word "nationalism" in a positive light. In 2009 9 percent of the people surveyed said they view the term "positively, in general," while their percentage has now increased to 20 percent. The number of those who view the term negatively decreased by 11 percent, from 75 percent in 2009 to 64 percent today. 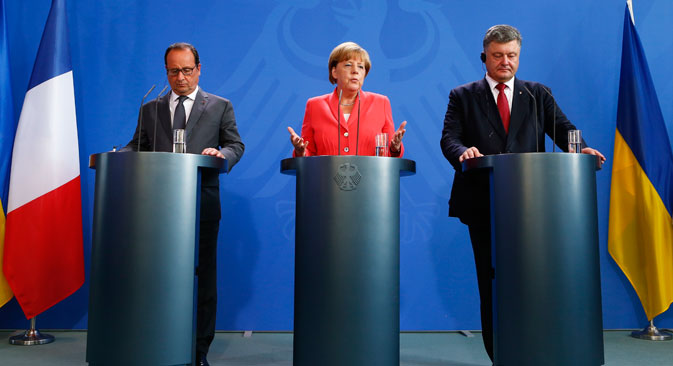