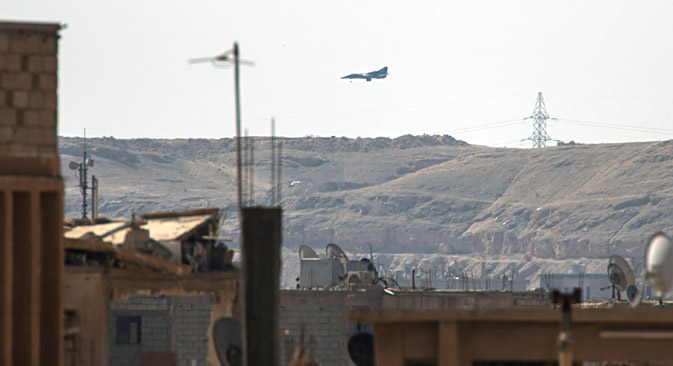 A MiG plane lands to resupply in the Hawiqah neighbourhood in the eastern Syrian town of Deir Ezzor on February 26, 2013. Source: AFP / East News

The Kommersant business daily reports that the U.S. government has imposed sanctions against Russian companies involved in the supply of nuclear and missile technologies to Iran, North Korea and Syria.

Washington accuses large Russian corporations, such as Rosoboronexport and MiG, of violating U.S. legislation in the field of non-proliferation of weapons of mass destruction.

The newspaper also writes that the U.S. Bureau of Industry and Security has extended its sanctions list, which was drawn up to punish Moscow for its role in the conflict in Ukraine. Subsidiaries of Rosneft were particularly affected by the measures.

A Kommersant source within the U.S. Embassy in Moscow explained that the document prepared by the U.S. Ministry of Trade "is not an extension of the sanctions, but rather an internal measure aimed at better controlling exports in accordance with the financial sanctions."

On Sept. 2 the Committee of Permanent Representatives in the EU will discuss the issue of extending EU sanctions against Russian and Ukrainian citizens whom the EU believes are responsible for undermining Ukraine's national integrity and sovereignty, writes Kommersant.

U.S. has made release of pilot Savchenko its business

The Vzglyad online newspaper writes that the U.S. State Department has begun its campaign to free Ukrainian citizen Nadezhda Savchenko, who in Russia is accused of being involved in the murder of two journalists from the All-Russia State Television and Radio Broadcasting Company.

Savchenko, who was captured by rebel fighters in eastern Ukraine in 2014 and handed over to Russia, is on a list of 20 women whom Washington is determined to free. The list was presented at a State Department briefing on Sept. 1 by U.S. Ambassador to the UN Samantha Power.

According to political scientist and President of the Institute of National Strategy Mikhail Remizov, the conflict over Savchenko can be resolved after "the resolution to the Donbass problem," but not while it is being worked out. It is also possible that Savchenko will be exchanged for one of the Russian servicemen who are being held by Kiev.

At the beginning of an article devoted to the importance of reform in Russia in developing ties with Beijing, the centrist daily Nezavisimaya Gazeta analyzes the political significance of Russian President Vladimir Putin's visit to China on Sept. 2, on the 70th anniversary of the end of WWII in Asia.

According to the publication, Putin wishes to demonstrate his solidarity with China, which, along with the Soviet people, suffered the greatest losses during the war. By being present at the parade on Tiananmen Square the Russian president is repaying his gratitude to Chinese President Xi Jinping, who was the guest of honor during Russia's victory parade on Red Square on May 9.

In turn, Beijing, according to Nezavisimaya Gazeta, intends to show that the time when foreigners – first and foremost the U.S. – could impose their will on China with the help of superior power are now in the distant past. This year Moscow and Beijing have often criticized attempts to reduce the USSR's and China's role in the victory and rewrite the story of the war. For Russia this point is especially important since the Kuril Islands were officially given to the USSR as part of the post-war settlement.