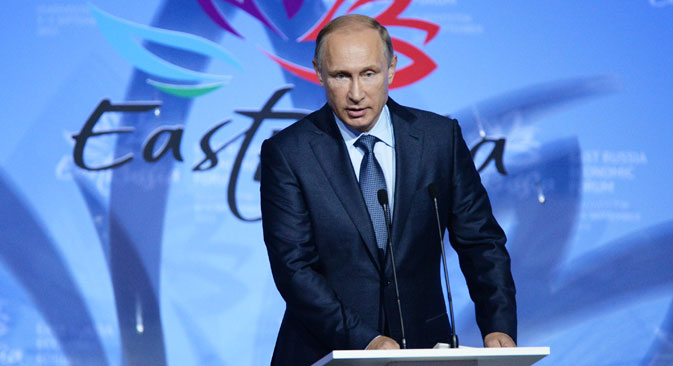 Mikhail Voskresenskiy/RIA Novosti
Russian President Vladimir Putin has said that "economic freedom" is one of the government's main priorities in the Far East. In particular, investors will be attracted to the free port of Vladivostok and to the most promising sectors, such as transportation and shipbuilding.

One of the main priorities for the development of the Far East must be economic freedom, Russian President Vladimir Putin has said.

"Our main priorities in the Far East are an active social development policy, the creation of transportation and education infrastructure and of course, the expansion of economic freedom for domestic and foreign investors and better conditions for doing business," said Putin during a plenary meeting at the Eastern Economic Forum on Sept. 4.

According to Putin, in terms of efficient investment return, the Far East must compete confidently with the leading business centers in the world. The Russian president reminded the audience that the Pacific Region countries, despite the current problems, are still the engine of the world economy and an important market for goods and services, and thus the strengthening of ties with these countries has strategic significance for Russia.

According to the Russian leader, laws have already been passed that will enable the creation of territories of priority development and a free port in Vladivostok, which will guarantee businesses exclusive preferences, including facilitated procedures for crossing the border.

"Foreigners arriving at the free port of Vladivostok will receive 8-day visas right at the border, while residents will be given privileges concerning insurance and tax payments," said Putin.

He added that representatives from Western Europe, as well as businessmen from China, South Korea and Japan, have all shown interest in the free port. For the latter three countries the port is the shortest and most effective way to enter international sea routes. Putin also suggested extending the preferences of the free port to other Far Eastern harbors.

"All the basic conditions for doing business must be competitive in the Far East: access to financial resources, as well as sustainable transportation and energy costs," he said.

The president underlined that electric energy costs are an old problem and suggested developing attractive, competitive costs for each region separately and if necessary, attracting additional budget resources for the creation of infrastructure.

Among the sectors that should interest investors most, according to Putin, are shipbuilding, metallurgy, woodworking, bioresources, transportation, energy, healthcare and tourism.

Rosneftgaz is investing 60 billion rubles ($890 million) in the modernization of the Zvezda shipyard in the Primorsky Territory, the total cost of which is 146 billion rubles ($2.16 billion). Putin remarked that as a result, the factory will serve as a foundation for a modern cluster for civilian shipbuilding, the production of sea technology, reconnaissance technology and production and transportation of hydrocarbons. Furthermore, Rosneft and partners are planning to invest in the Far East projects a total of 1.3 trillion rubles ($19.27 billion).

The Russian president believes that another avenue for developing the Far East is the creation of a network of scientific centers in the Asia-Pacific region. Collaboration in the scientific and educational fields is of utmost importance.

"All this can become a powerful stimulus for technological development for all Pacific Region countries,” said Putin, stressing that in the Far East Russia has substantial scientific potential.

"We are ready to launch an entire series of initiatives in this direction. For example, we are proposing the joint creation of large research platforms and installations, the so-called Megascience projects, which could lead to real scientific breakthroughs."

Such laboratories, noted Putin, are concentrated mainly in Europe. "I think the time has come to create such an infrastructure, such a network of scientific and educational cooperation centers, also in the Pacific region," he said.

TROIKA REPORT: Moscow seeks full integration into Asia, but what can it offer?