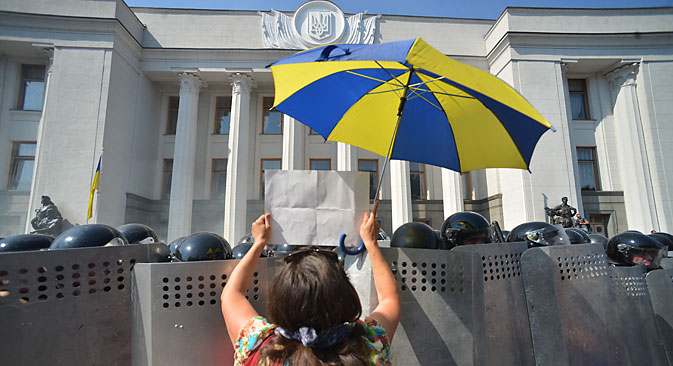 A participant in protest rallies near the building of Verkhnovna Rada in Kiev, Aug.31. Source: Alexei Vovk / RIA Novosti

In the wake of clashes outside the Ukrainian parliament in late August that claimed at least three lives, observers have started talking about a new round of political crisis in Ukraine and its possible consequences. RBTH asked Russian experts whether a new Maidan-style revolution is possible in Kiev.

Back on Aug. 31, after the adoption by Ukraine’s parliament, the Verkhovna Rada, in the first reading of the amendments to the country’s constitution proposed by President Petro Poroshenko to give more autonomy to the Donbass region in the east, clashes between radicals (supporters of a unitary state) and law enforcers erupted near the building, which resulted in the deaths of three national guardsmen.

Poroshenko later promised to reveal details about those behind the riot, saying on Sept. 8 in a speech to the cabinet that "the details to be provided by investigators will be unveiled very soon, and it will be a shock when you hear of the terrorists' plans, what they had been going to do.”

“A part of the Ukrainian political elite decided that external risks were no longer relevant and that "now is the right time to incite internal conflicts," he said.

For the first time since the events on Kiev’s central square, the Maidan, at the turn of 2013 and 2014, protests in the center of Kiev led to casualties. However, Russian analysts do not see these events, which have already led to a restructuring of the ruling coalition (Oleh Lyashko’s Radical Party has left the grouping), are the forerunner of some catastrophic scenarios in Ukrainian politics in the short term.

The political crisis that began in Ukraine in late 2013 is now escalating once more, says Boris Shmelyov, head of the Center for Political Research of the Institute of Economics at the Russian Academy of Science.

"The struggle is growing between the Ukrainian oligarchs for the areas of political influence and access to the “financial pie,” which is controlled by the state. At the same time, the political standoff within the ruling coalition and between the political parties has been aggravated. Dissatisfaction of the public with their economic position is growing," he said.

Shmelyov says Ukraine has several options to resolve the crisis, but the most likely scenario is that Poroshenko will choose to concentrate power in his hands. This will lead to a tightening of control over the political situation and the suppression of opponents of the president, represented by the Opposition Bloc party and radicals from the nationalist party Right Sector, who supported him during the Maidan uprising of winter 2013-2014.

Since Poroshenko has control over the country’s financial and administrative resources and enjoys the support of the West, Shmelyov predicts victory for the Ukrainian president in this confrontation with his opponents.

At the same time, according to the analyst, to distract the population from the real socio-economic problems, Poroshenko will continue a massive political campaign directed against the Russian Federation and the self-proclaimed republics of eastern Ukraine.

Boris Kagarlitsky, head of the Institute of Globalization and Social Movements, also believes that the conflict in Ukraine will grow. However, in his opinion, nothing will change dramatically over the next few years.

“As of today, a typical rule for Ukraine is the chronic and stable reproduction of instability,” Kagarlitskiy told RBTH, saying that this will continue until a political force that can put an end to this appears in Ukraine.

According to the analyst, the current Ukrainian political class itself cannot give rise to something like this because of its “subjectlessness”; Ukraine’s paralyzed society does not include any particular social group with a complete development project that could represent this class.

Therefore, the initiators of the changes can only be forces outside Ukraine’s political class – either the military or some external, foreign players. However, they also need time to take action.

‘Poroshenko is a hostage to war’

Ukrainian analyst Andriy Yermolayev, director of the New Ukraine Institute for Strategic Studies, told RBTH that the development of events in Ukraine is directly connected with the effects of the Minsk agreements signed in February, according to which a formula for Ukrainian domestic dialogue should be worked out and a political solution to the ongoing conflict between government forces and Russia-backed rebels in the Donbass region of eastern Ukraine should be found.

However, Kiev continues to demonstrate an unwillingness to offer any reasonable political constitutional formula.

“Poroshenko has become a hostage to the situation,” said Yermolayev. “He is afraid of losing rating. He may have understood the need for dialogue, but he is a hostage to war.”

At the same time, the president’s compromise proposals on decentralization, which formed the basis for the hopes of resolving the conflict, have split the Ukrainian political world into several parts. In these circumstances, the topic of peace and intra-dialogue has become more symbolic than real – it is not even discussed.

Yermolayev notes the importance of the upcoming local elections; they will be held both in Ukraine and Donbass, but in the latter case, under the control of the authorities of the breakaway regions.

The question of a “new political design in the region that leaves Ukraine” will become obvious, said Yermolayev, who compared the potential situation to that of the breakaway Georgian region of Abkhazia, which currently enjoys close ties to Moscow.

After the election and “even greater failure of the Minsk accords,” said Yermolayev, the crisis of power is likely to deepen in Kiev – it is already seen now in the example of the coalition – and prerequisites will emerge for early elections in 2016.

At the same time, the preparation for these polls will take place in an environment in which, according to Yermolayev, “there are already signs of collective dictatorship”: some political forces, such as Poroshenko and Yatsenyuk’s parties, have occupied high positions in the government and are doing their best to minimize the influence of opposition.

However, Yermolayev does not believe a policy of monopolization of power will bear fruit and predicts the emergence of new political players in Ukraine by the spring of 2016. 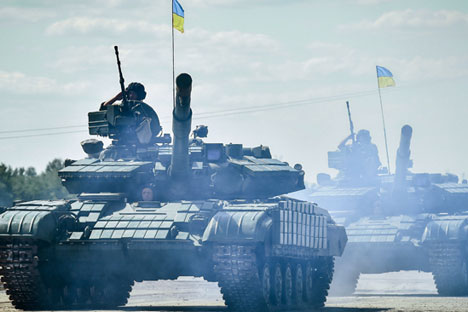 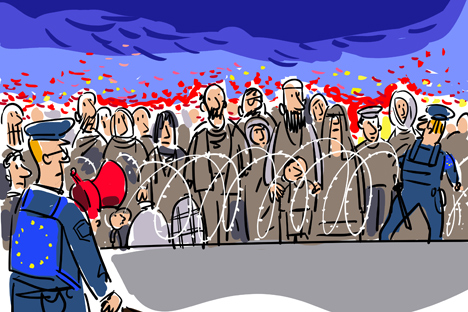