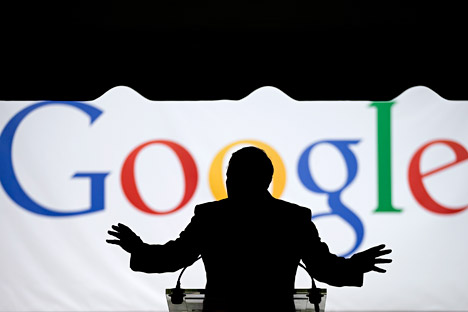 The Russian branch of Google was fined 50,000 rubles ($770) for monitoring the content of lawyer Anton Burkov's Gmail correspondence. Source: AP

RBTH presents a selection of views from leading Russian media on international events, featuring reports on why a Moscow court ruled that Google’s content-targeted advertising constituted a breach of privacy, the reasons behind the use of the Glonass navigation system over GPS for Russian bombers, and Ukraine’s delay in purchasing winter gas.

The Moscow City Court has explained why it fined Google’s branch in Russia 50,000 rubles ($770) under a lawsuit filed by a Yekaterinburg lawyer, Anton Burkov, for reading his private correspondence, the Kommersant business daily reports, adding that now all Gmail users can follow Burkov’s example and take Google to court over contextual advertising built into its email service.

On Sept. 16, the Moscow City Court upheld an appeal filed by lawyer Anton Burkov, who had proven that emails that he received in his Gmail account had ads unlawfully built into them, whose content was driven by the contents of his correspondence.

“Even if emails 'scanned' or 'read' by a robot are not seen by a human being, there is no guarantee that a new Snowden will not copy all those messages read by a robot and then use them in their interests,” the paper quotes Burkov as saying.

Lawyer Ivan Pavlov, who specializes in freedom-of-information cases, says that the court’s ruling is in line with the current tensions in relations between Russia and the U.S.

Google spokesperson Anna Zabrovskaya told Kommersant that “lawyers were studying” the Moscow City Court’s ruling and for the time being the company had no comment to make on it.

Russia, alongside the United States, is among those countries that have been able to create their own satellite navigation system, the centrist daily Nezavisimaya Gazeta reports. The Russian navigation system, Glonass, has enabled Russian military aircraft in Syria to carry out flights without involving the GPS system,which the Russian military does not trust, the paper adds.

“An analysis of military conflicts has shown that the option of introducing deliberate adjustments is being made active use of. We cannot rely on data generated by GPS,” the paper quotes the chief of staff of the 15th Army of the Russian Aerospace Forces, Maj-Gen Anatoly Nestechuk, as saying.

According to Nestechuk, Russia’s Glonass system currently covers the whole world and is continuing to develop.

“At the moment its accuracy is about 3-5 meters, which is comparable with GPS,” he said.

Yet, there are some problem areas too, writes Nezavisimaya Gazeta. So far, there are only two new-generation Glonass-K satellites in orbit. They weigh half of what their predecessors, the Glonass-M, weigh and can operate twice as long, for 10 years. U.S. satellites of the GPS system, meanwhile, have a service life of 20 years. If nothing else, this means that Russia’s costs on the system are twice as high as America’s, writes the paper.

Another problem area is the use of foreign components. Despite Russia’s efforts to set up its own orbital grouping, some components are still manufactured abroad, which results in the potential risk of an “enemy filling,” writes Nezavisimaya Gazeta.

Ukraine has still not signed the winter package of gas deals that was agreed more than a week ago, whereas the other two parties to the three-way agreement, Russia and the EU, have already done this, reports the news website Gazeta.ru.

On Oct. 2, Russian Energy Minister Alexander Novak said that Kiev could start purchasing gas without the agreements being finalized. However, so far Ukraine is not doing that either.

Ukraine has been in no hurry to fill its underground gas storage facilities, local energy expert Valentin Zemlyansky points out. According to him, the risk of a shortage of gas for Kiev remains quite high, which in turn creates risks for the reliability of Russian gas transit via Ukraine. If it starts to experience a shortage of gas for its own needs, Kiev may start misappropriating gas intended for transit.

According to the head of the National Energy Security Fund, Konstantin Simonov, a shortage of gas in the underground storage facilities should not be much of a problem provided there are regular direct gas supplies from Russia throughout the winter.

“The total amount of costs for gas supplies in the fourth quarter of 2015 and the first quarter of 2016 may reach $2–2.5 billion, where as so far Europe is ready to allocate only $500 million,” said Simonov. “That is why Kiev is playing for time in the hope of securing more financing.”

Indirectly, this is confirmed by Ukrainian Energy Minister Vladimir Demchishin’s announcement on Oct. 2 that Ukraine would definitely buy Russian gas to the amount of $500 million. “Beyond that, we are under no obligations,” he said.

East European Gas Analysis head Mikhail Korchemkin told Gazeta.ru that Kiev may be trying to secure “an additional discount or, even better, a revised price formula.”