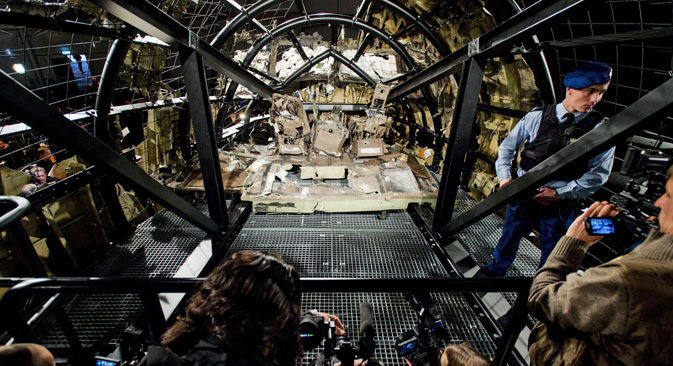 Russian Ambassador to Malaysia Valery Yermolov said his country would continue to work with Malaysia through the International Civil Aviation Organisation in seeking justice for the victims of the shooting down of MH17.

Russia is committed to working with Malaysia to catch the culprits behind the July 2014 shooting down of Malaysia Airlines MH17, Russian Ambassador to Malaysia Valery Yermolov said at a press conference in Kuala Lumpur on October 15.

Flight MH17 was brought down on July 17, 2014 over eastern Ukraine while en route from Amsterdam to Kuala Lumpur, killing all 298 passengers and crew, most of whom were from the Netherlands, Malaysia and Australia.

Dutch specialists, who carried out a detailed analysis of the wreckage of the plane for their investigation, said this week that the plane was hit by a Russian-made BUK 9M38M1 missile.

At the press conference in Kuala Lumpur, Yerlomov said Moscow has appealed to the International Civil Aviation Organisation for a new probe into the shooting, as it believed the Dutch report to be biased.

Yeromov added that Russia no longer owned such missiles and that the warhead was decommissioned in 2011.  He said that the missile mentioned in the report by Dutch investigators was developed in 1986 and had a warranty period of 25 years.

Russian Ambassador to Malaysia Valery N. Yermolov (C) looks on as he addresses the media during a press conference at the Russian embassy in Kuala Lumpur on October 15, 2015. Source: AFP/East News

“In 2011, these missiles were decommissioned by the Russian army, but we know exactly that the Ukrainian army owns 520 missiles until now,” Yerlomov said. He added that many former Soviet countries as well as some NATO members like Greece still had such missiles.

The ambassador said the missiles owned by the Russian armed forces no longer contained the shrapnel in shape of butterflies that were found on the fuselage of MH17.

Yermolov added that Russia was not granted access to all the investigation materials by the Dutch authorities. “It is our understanding that the report on the crash by the experts from Almaz-Antey, the main developer of BUK missile launchers, has also been ignored,” he added.

Yermolov called on Malaysian leaders to stop pointing fingers at Russia. “I was a little bit surprised and disappointed when the leaders of Malaysia said that the aircraft was downed by a Russian-made BUK missile,” he said at the press conference.

He added that Russia and Malaysia needed to continue their cooperation into the incident.

“Continuing the investigation with the necessary adjustments and ensuring the participation of all countries that possess materials that could shed light on the MH17 crash could be a way out of this situation,” Yermolov said. “It goes without saying that Russia stands ready to join these efforts.”

Flight MH17: Russia blocks UN resolution on international tribunal
Russian Ambassador to Malaysia Valery N. Yermolov (C) looks on as he addresses the media during a press conference at the Russian embassy in Kuala Lumpur on October 15, 2015. Malaysia vowed on October 13 to seek the prosecution of the "trigger-happy criminals" who downed flight MH17, after a Dutch-led investigation said it was shot down by a missile fired from war-torn eastern Ukraine. credit AFP/East News