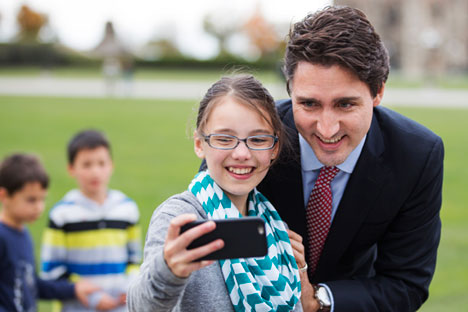 RBTH presents a selection of views from leading Russian media on international events, featuring analysis of the significance of the victory for the Liberal Party in the Canadian elections, as well as reports on an upcoming vote in the Iraqi parliament on whether to ask Russia for military aid, and a 5-year sentence given to a Chechen man for trying to leave the country to join ISIS in Syria.

The Vzglyad online newspaper writes that the Canadian elections were a failure for Prime Minister Stephen Harper, who had had hopes of winning a fourth term in office. For the first time in almost 10 years the Liberal Party, led by Justin Trudeau, has defeated the Conservatives.

During Harper's tenure Canada obtained the status of one of the most “anti-Russian” countries in the world, writes the publication. It was one of the first countries to introduce sanctions against Moscow over its actions in Crimea and eastern Ukraine, as well as visa restrictions. Experts said that these decisions were related to Canada's large Ukrainian diaspora, which consists of more than one million people.

According to Vasily Sokolov, Director of the Canada Department at the Russian Academy of Sciences’ Institute of US and Canadian Studies, the Conservatives' departure from power is a good sign for Russia.

"The young leader of the Liberal Party is unlikely to bear any personal grudges against Russia," said Sokolov. "He is the son of Pierre Trudeau, who did a lot for Canada, particularly for the development of Canadian-USSR relations."

Sokolov expects there to be a thaw in relations, although not immediately.

"With time this will happen. Contacts will become closer. From the Russian point of view, the Liberal Party's victory gives us certain hope," he said.

Iraq may ask Russia for airstrikes against ISIS

The Kommersant business daily reports that by the end of October the Iraqi parliament plans to vote on whether or not to ask Moscow for support in the fight against Islamic State.

"Several factions of our parliament have called on the Iraqi government to request that Russia conduct airstrikes on ISIS bases," said parliamentarian Muvaffak ar-Rubai in an interview with the Fars agency, before going on to criticize Washington’s military activities:

"The U.S. Air Force does not interact with the republic's government, our security forces and armed forces, and does not give us any reconnaissance information on the places where ISIS is concentrated and on their field camps," he said.

Nevertheless, at the beginning of October U.S. Chairman of the Joint Chiefs of Staff General Joseph Dunford said that he had been able to convince Iraqi Prime Minister Haider al-Abadi not to ask Russia for help.

"I said that it will be difficult for Iraq to guarantee the necessary support if Russia carries out its operation here," said Dunford.

Earlier, Russian Deputy Defense Minister Anatoly Antonov said that Iraq had still not asked Russia for military aid similar to that being given to Syria, but in the event it does, the request will be reviewed accordingly.

The Gazeta.ru online newspaper reports that the Chechen Supreme Court has declined an appeal to overturn the verdict for 19-year-old Arbi Dikayev, who was sentenced to five years in jail for attempting to join the Islamic State (ISIS) radical militant group in Syria.

According to the website of the Chechen prosecutor's office, Dikayev had sold his computer and used the money to buy a ticket from Stavropol to Istanbul "in order to later cross the Syrian border and join the illegal armed group." When he arrived at the airport, he was detained.

"The verdict clearly says that the times when it was possible to go to Syria, then spend two-three years in jail and be released, as it was the case just recently, are over," said Akhmet Yarlykanov from the Institute of Ethnology and Anthropology at the Russian Academy of Sciences.

According to the Chechen Interior Ministry, 405 people left the republic for Syria in 2013, of which 44 people returned to Chechnya, 104 died and the fates of the others are unknown.

"It is very difficult to understand who actually comes back," said Yarlykanov. "It is true, there may be many disillusioned people, but among them there may be those who want and who can continue fighting on Russian territory." Yarlykanov believes that the authorities will tighten control over those who have returned and will make the laws even harsher.

Are Russia and the U.S. on the brink of a proxy war in Syria?