Press Digest: Using bitcoins in Russia could lead to 4 years in jail 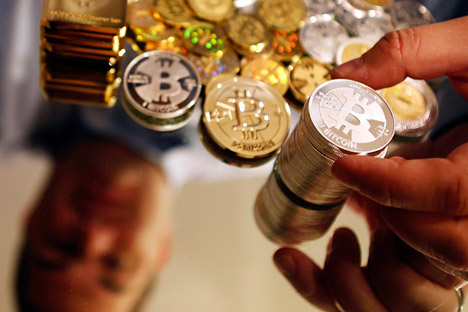 Reuters
RBTH presents a selection of views from leading Russian media on international events, featuring reports on a draft law proposing prison terms for the use of cryptocurrencies, the creation of a research center in Ukraine aimed at improving bilateral relations with Russia, and a review of the first month of Russian military activity in Syria.

Finance Ministry proposes four-year prison term for use of bitcoins

The Ministry of Finance has prepared a draft law providing for up to four years in prison for the issuance and circulation of cryptocurrencies, reports centrist broadsheet Izvestiya. The department classified bitcoins as monetary surrogates, equating their turnover to illegal financial transactions.

Yelena Lashkina, assistant to Economic Development Minister Alexei Ulyukayev, believes that the use of currencies carries a high level of risk.

"The anonymous nature of the production of monetary surrogates, including cryptocurrencies, by an unlimited range of actors creates the preconditions for involving citizens and companies in illegal activity, including the legalization (laundering) of proceeds from crime and terrorist financing," she said.

The newspaper notes that the Russian company Qiwi announced in September 2015 that it would begin work on development of “bitrubles,” with the aim of making it possible to pay with bitrubles for services (for instance, mobile communications) as early as 2016. CEO Sergei Solonin said that the company would employ the blockchain technology used by the Bitcoin system.

Kiev preparing for new phase in relations with Moscow

Ukraine is creating a research center for studying the problems of the Russian Federation, reports centrist daily Nezavisimaya Gazeta. The new organization will be developing recommendations for the authorities – how to build relations with Russia in each individual sphere.

Andrei Yermolayev, director of the New Ukraine Institute for Strategic Studies, believes that the source of many problems is the lack of information.

"In fact, academic and expert circles and the intellectual elite do not know what has been happening in the neighboring country in the past two decades, do not understand the essence of the processes in societies, in politics, the economy," he said.

Yermolayev believes that Ukrainian scientists and experts should look for ways of dialogue with Russian circles, open to honest conversation. At this stage, the authorities need guidance with respect to tactics, he said.

"It is calm now, but let's see what will happen after the local elections, if the Russian side is not satisfied with their results," he said.

"It is necessary to forecast it. The conflict in the Donbass is not settled and not frozen, it is only temporarily suspended. How to proceed, what to prepare for, what potential scenarios for the situation should be taken to negotiations – all this should be analyzed by experts.”

Russia in Syria: A month of action

The business daily Kommersant reviews the first month of the Russian troops' presence in Syria.

According to the newspaper, the build-up in the port at Tartus began as early as August and September, when large landing ships were loaded in Novorossiysk with special equipment and ammunition before making their way to the Mediterranean Sea through the Bosphorus.

Having accumulated a sufficient quantity of weapons, the military only had to relocate aircraft. By Sept, 30, an Air Force group of more than 50 aircraft was formed at the Hmeymim air base.

"We would see a constructive role in Syria or against ISIS in Syria on the part of Russia, if they actually hit ISIS targets," said U.S. State Department spokesman Mark Toner. "But we’ve not seen that thus far."

Alexander Perendzhiyev, an expert with the Association of Military Political Analysts, notes that Russian forces have encountered a number of difficulties during the operation.

"The problem is the lack of interaction with the Western coalition. In addition, not every target can be destroyed without coming into tension with the local population," he said.

"The participation of the Russian Air Force in the operation to a greater extent morally supports [Syrian leader] Bashar al-Assad, and gives him hope that Syria will be freed from the terrorists."