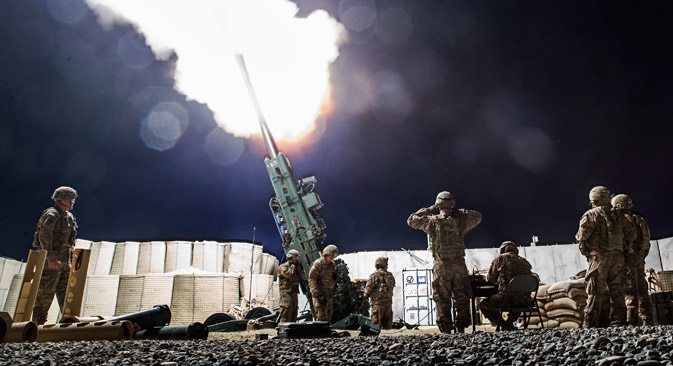 U.S. soldiers from the 3rd Cavalry Regiment take part in an artillery exercise on forward operating base Gamberi in the Laghman province of Afghanistan December 24, 2014

Reuters
RBTH presents a selection of views from leading Russian media on international events, featuring reports on the announcement by U.S. Secretary of Defense Ashton Carter that Washington may send ground forces to Syria and Iraq, rumors that Ukrainian Prime Minister Arseniy Yatsenyuk faces dismissal, and the Prosecutor General’s decision that Microsoft Windows 10 is not violating personal data laws.

U.S. forces may be sent to Syria and Iraq

The Gazeta.ru online newspaper cites Pentagon chief Ashton Carter as saying that the United States may start a ground operation in Syria and Iraq.

"We will not turn back from reliable partners who are fighting ISIS and will help them with targeted action from the sky or direct activity on the ground," he said immediately after signatures had been collected in Iraq to request Russia to destroy Islamist targets in the country.

According to Doctor of Military Sciences Konstantin Sivkov, Russia's inclusion in the Syrian conflict creates a reason for the Americans to begin a ground operation.

"The U.S. has been dreaming of a ground operation in Syria for a long time," he said. "But without the permission of the Syrian government or the UN Security Council this would be a violation of international law."

However, explained Sivkov, this scenario contains all the risks of a direct clash with Russia.

"If the Americans hit [Syrian leader] Bashar Assad, Moscow will have to either defend him with its aviation or supply him with antiaircraft systems and act according to the ‘Vietnamese version,’ that is, manage Assad's army on behalf of the Syrians," he said.

"In any case, this risks turning into a conflict between Russia and the U.S., which is why America will think twice before deploying its forces."

Is axe about to fall on Arseniy Yatsenyuk?

The Kommersant business daily cites Ukrainian presidential sources as saying that the government may decide to dismiss Prime Minister Arseniy Yatsenyuk over disappointing results in the Ukrainian local elections on Oct. 25.

Yatsenyuk's dismissal has been brewing for a long time: the rating of his People's Front Party's ratings has fallen to just one percent. According to one source, Ukrainian President Petro Poroshenko may blame Yatsenyuk for the failure of the government’s economic policy, thus letting voters know that their voices have been heard.

A possible candidate to replace Yatsenyuk is Finance Minister Natalya Yaresko, a former U.S. citizen. Ukrainian experts believe that as finance minister she has demonstrated effectiveness and that neither the EU nor the U.S. will be against her appointment.

The decision to replace the prime minister may be made in the upcoming days.

"It seems that Yatsenyuk himself understands the inevitability of his departure, in relation to which he has drastically harshened his tone, especially in his statements against Russia. This will later help him argue that he was removed for his patriotism," said a deputy from Oleh Lyashko's Radical Party.

"The attempt to make Yatsenyuk the only scapegoat is not an honest game on the part of Poroshenko's entourage,” said another source, recalling that last time the president had persuaded Yatsenyuk not to resign. “The prime minister and the president worked together in a team, they carried out reforms that they had agreed on.”

"I think that this time Poroshenko will also change his mind at the last moment, fearing the collapse of his coalition and inevitable early elections as a result,” said the source.

The daily broadsheet Izvestiya reports that Microsoft is collecting Russians' personal data but this is happening in accordance with Russian law.

The conclusion was made by the Prosecutor General's Office after having checked the company’s Russian representative and Windows 10. It was Vadim Solovyov, chief lawyer of the Communist Party, who had demanded the inquiry.

"The Windows 10 developer collects the following user information: name, surname, email address and so on," said the prosecutor's office. "Moreover, Paragraph 3 of the Windows 10 License Terms requires the user's agreement on processing the given data, which complies with Article 437 of the Russian Federation Civil Code and Paragraph 5, Part 1, Article 6 of the Federal Law on Personal Information."

The terms also say that the citizen has the option not to provide any information.

However, writes Izvestiya, the lower house of Russia’s parliament, the State Duma, is not happy with the inquiry.

"The law clearly says that Russian citizens' personal data must be processed only on Russian territory," said Solovyov. "But for some reason the prosecutor's office did not take this into account."

Meanwhile, German Klimenko, head of the Institute of Internet Development, described the result of the inquiry as “expected” but added that in light of the current situation “all issues related to personal information provoke a heated reaction in society.”