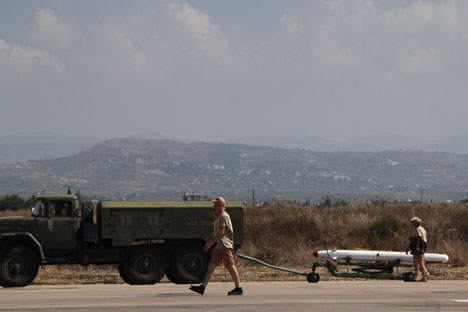 Ria Novosti/Dmitry Vinogradov
RBTH presents a selection of views from leading Russian media on international events, featuring reports on a military official’s explanation of Russia’s involvement in Syria, disagreements between the U.S. and Russia concerning a Russian-sponsored UN resolution and new theories regarding the Airbus crash propagated by the U.S. and UK in the media.

Colonel General Viktor Bondarev, the commander of the Russian Air and Space Forces, spoke on the progress of the operation in Syria in an interview with the Komsomolskaya Pravda tabloid newspaper. In particular, Bondarev said that Russia supplied Syria not only with aviation but also with anti-aircraft missile systems.

Bondarev said that the military studied all places that are "sensitive" to the civilian population of Syria. "These include mosques, schools, holy places, hospitals, maternity homes and schools,” he said. “We have marked them with red circles and dots to ensure that under no circumstances should any bomb fall there."

Bondarev also said that the military was receiving information about ISIS positions from satellites, drones, as well as from human intelligence. "Therefore, we carefully check every target, every task that is set, coordinate it with local authorities, the generals of the Syrian armed forces and then make a decision on each site," he said.

Bondarev denied reports about an attack on the airfield where the Russian air force group was stationed and said that the military had not received a single complaint from locals.

U.S. does not support Russia on UN space arms resolution

During the 70th session of the UN General Assembly, the United States voted against the draft resolution, "No First Placement of Arms in Outer Space," developed by Russia and 26 other countries, reports the Kommersant business daily. The U.S. delegation explained that the document does not clearly define what should be considered "arms in outer space."

During the vote at the First Committee of the General Assembly on November 3 the resolution was backed by representatives of 122 countries, 47 delegates abstained, while the United States, Georgia, Ukraine and Israel voted against it.

The document speaks of "the importance and urgency of preventing an arms race in outer space and the readiness of all states to contribute to that common objective."

After the vote, the U.S. Ambassador to the Conference on Disarmament, Robert Wood, said that the document did not define what constituted a "weapon in outer space."

Additionally, according to the American delegation the "initiative focuses exclusively on space-based weapons. It is silent with regard to terrestrially-based anti-satellite weapons and thus could contribute to increasing, not reducing, mistrust and miscalculations."

Considering all these factors, the United States "will again vote 'No' on this First Committee resolution and intends to vote 'No' again in the full General Assembly."

In December 2014, on the initiative of Russia the United Nations adopted an early version of the "No First Placement of Arms in Outer Space" resolution. According to the resolution, spacefaring nations must abandon the space arms race for the sake of a safer world. A total of 126 countries signed the text. Just like the recent vote, it was opposed by four states.

U.S. and UK suspect the worst

Officials from the UK and the U.S. almost simultaneously made statements and reports about the causes of the collapse of the Russian A321 in Egypt to the media, the online newspaper Gazeta.ru reports.

British Prime Minister David Cameron's office was the first to voice the terrorism theory on November 4. According to its representatives, the A321 plane "may well have been brought down by an explosive device."

The British government has suspended all flights between the UK and Egypt, which is visited by around 900,000 British citizens every year.

The Associated Press clarified that the conclusion that the Islamic State stood behind the tragedy in the air made by the Western secret services was based on intercepted communications between the alleged organizers of the attack. So far, no evidence of this theory has been presented.

Additionally, there could be problems concerning the decoding of the "black boxes." "The cockpit voice recorder has suffered serious mechanical damage," the Interstate Aviation Committee (IAC) said in a statement on November 4.

"Now in Egypt, the preparatory work with the participation of experts of the IAC and France’s BEA (French agency that investigates aviation incidents – RBTH) is being undertaken to copy the recorded information, taking all possible precautionary measures."