Russia-Ukraine flight ban: A month in 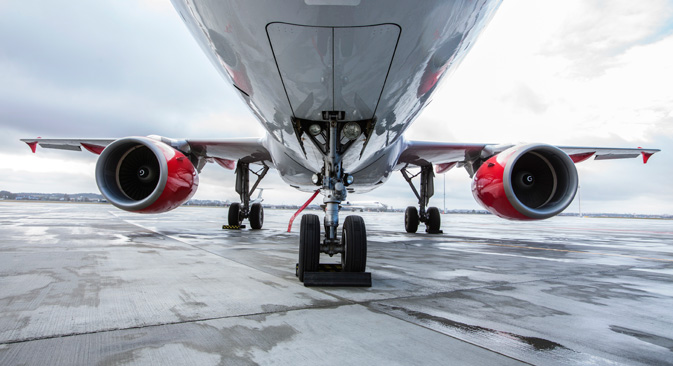 On Oct. 25, direct flights between Russia and Ukraine ceased.

ShutterStock/Legion Media
In the days since direct flights between Russia and Ukraine ended, frequent travelers between the neighboring countries have had to spend more time and money going back and forth.

Air travel is the latest industry to fall victim to tensions between Moscow and Kiev as both governments prohibit flights between their countries.

On Oct. 25, direct flights between Russia and Ukraine ceased in the world’s largest closure of civilian airspace since the eruption of an Icelandic volcano wreaked havoc across Europe in 2010.

Following Russia’s absorption of Crimea in March 2014, Ukrainian aviation authorities banned Russian airlines from landing at the peninsula’s largest airport, in the city of Simferopol. Russian airlines promptly ignored this ban, which led Ukraine to impose fines on the Russian airlines. These penalties were similarly disregarded.

Who will profit from flights from Russia to Ukraine now?

Eventually the dispute moved from Ukraine’s aviation authorities to the country’s political leadership, and, on Sept. 25, Ukraine unveiled a list of 20 Russian airlines that would not be permitted to operate in any Ukrainian airports as of Oct. 25. Russia reciprocated by barring all of Ukraine’s airlines, and, in response, Ukraine barred the few remaining Russian airlines, thus sealing a complete closure of the airspace.

According to independent aviation expert Oleg Panteleyev, ordinary passengers will be the biggest losers in this geopolitical tit for tat. About two million Russian citizens are of Ukrainian descent, and over eight million Ukrainian citizens are ethnic Russians, according to census data. Many Russians have family in Ukraine, and the reverse is true for Ukrainians.

“I’m more than upset about this situation; I’m furious,” said Ivan, a Moscow-based advertising executive who is originally from Ukraine and whose parents still live there. “Why should ordinary people pay for politicians’ decisions?”

Tatiana, a manager from Kiev who frequently travels to Russia on business, was disappointed but not surprised. “This had to be expected,” she said. “The relations between the two countries are at such a low point, that it could have happened any minute.”

Konstantin Liorek, the C.I.S. regional director for a European spare parts manufacturer who is based in Kiev but spends a lot of time in Russia, tried to find a bright side in the situation. “Okay, it’ll take me a half day or even an entire day [to travel between Russia and Ukraine] as opposed to an hour and a half,” he said. “But I’ll collect more miles on a frequent flyer program!”

“I don’t see it as a tragedy,” he concluded. “Peace is more important.”

Russian and Ukrainian airlines will also face considerable losses. In the first eight months of 2015, about 800,000 people flew between Russia and Ukraine, according to Russian aviation authorities, according to inform agency Regions.ru. Aviation expert Pantaleyev estimated that Russian airlines carried half of them.

Russian airlines used to make about 450 flights a month to Ukraine, and the number of Ukrainian airlines’  flights to Russia was about half of that.

There are also some winners in this situation, however.

“Airlines from Belarus, Moldova and a few other countries are set to benefit,” said Andrei Kramarenko, an industry expert at the Higher School of Economics in Moscow.

What countries will Russians will have to fly through now?

Those traveling between Russia and Ukraine will now have to choose between stopovers in Minsk, Moldova’s capital, Kishinev, Istanbul or a train.

However, none of these solutions would be comparable to a direct flight.

Currently, the shortest flight between Moscow and Kiev with connections is offered by Belavia, and takes 3 hours and 10 minutes with a connection in Minsk. Other options could be as long as seven or eight hours.

The price starts at about 12,000 rubles for a round trip, compared with about 8,000 for a direct fight before the ban. A train ride would be cheaper, with prices starting at 2,800 rubles one way for second class, but it takes 13 hours. There doesn’t seem to be a lot of demand for this option. A quick check of the website of Russian passenger train monopoly Russian Railways showed plenty of tickets on the six trains leaving Moscow for Kiev the following day.

This isn’t the first time air travel has been affected by political disputes between Russia and one of its neighbors. The country closed its airspace with Georgia in 2006 following allegations of spying. For 18 months, passengers traveling between the two countries had to decide to make a stopover in Azerbaijan, Armenia or Ukraine.

Direct flights were resumed in early 2008 but interrupted again in August of that year, as a result of the Five-Day War. The two countries eventually reopened their airspaces to direct flights between them in 2010.