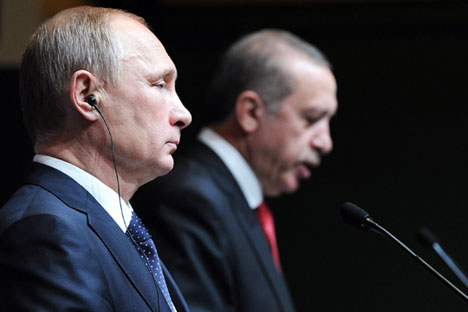 EPA
RBTH presents a selection of views from leading Russian media on international events, featuring reports on the economic sanctions Russia has imposed on Turkey, department store Stockmann’s announcement that it is to leave the Russian market and will make way for UK retailer Debenham’s, and a clumsy attempt by a man in Yekaterinburg to claim his neighbor’s apartment by denouncing him as an “enemy.”

Russian President Vladimir Putin has penned a decree introducing sanctions against Turkey following the downing of a Russian Su-24 bomber by the Turkish air force on Nov. 24, the Svobodnaya Pressa website reports.

The document, signed by Putin on Nov. 28, envisages restrictions on the import of certain types of products from Turkey. In addition, as of Jan. 1, Russia is suspending the visa-free travel regime for Turkish citizens, Russian employers will not be allowed to hire Turkish nationals, and charter flights will be banned.

“The sanctions create serious problems for Turkey,” said Nikita Maslennikov, head of the finance and economics section at the Modern Development Institute. “Say, if we scrap the construction of the Akkuyu nuclear power plant on Turkey’s southern coast or the Turkish Stream gas pipeline project, it will take Ankara quite a while to find new partners in nuclear energy or new suppliers of gas.”

“At the same time, it is important to realize that mutual sanctions, in the mid-term, almost always end in a draw. Indeed, in the next month or two Turkey will lose more. But in subsequent months, the Russian economy will suffer too.”

“In effect, with our actions we are taking Turkey out of the big geopolitical game,” said Stanislav Tarasov, head of the Middle East-Caucasus research center under the International Institute of Newest States.

“Hence, comments in the Turkish press that say that the country has suddenly found itself in political isolation. This is a very bad forecast for Turkey, especially, for preserving its territorial integrity.”

The Finnish retail chain Stockmann is selling its Russian assets to Reviva Holdings Ltd., which owns the Debenhams franchise, reports business daily RBK. In two years’ time, the Finnish company’s department stores in Russia will be replaced by those belonging to the UK chain.

The Finnish company’s press release says that in Russia, Stockmann will continue to operate only the Nevsky Center department store in St. Petersburg. Reviva Holdings is to pay 5 million euros in cash for 100 percent of shares in the Stockmann joint-stock company. The deal is expected to be closed by Jan. 31, 2016.

There are currently seven Stockmann department stores operating in Russia: in Moscow, St. Petersburg and Yekaterinburg.

According to Stockmann managing director Per Thelin, the company’s business in Russia “has been unprofitable for the past several years and the significant devaluation of the ruble has deepened the losses”.

“Stockmann department stores are targeted at the solid middle class, which has been hit the worst by the crisis: Customers are starting to switch to discount stores,” said RMG analyst Artyom Kislyuk.

Stockmann is not the first retailer to quit the Russian market amid the economic crisis. The Desigual, New Look, River Island, and Esprit chains have already closed their stores in Russia.

Yekaterinburg man denounces neighbor as ‘enemy’ – to claim his property

The Roskosvoboda website, which campaigns against internet censorship, has reported a user’s complaint that by mistake was sent to it instead of the media watchdog Roskomnadzor, writes the Moskovsky Komsomolets daily tabloid.

In his letter the user reported that his neighbor had access to websites that are banned in Russia and asked for the necessary measures to be taken.

Beauty and the Polar Bear: An Arctic explorer's diary

The user, identifying himself as Yevgeny Popov, complained that, having connected to his neighbor’s “fi-wi,” he could have access to “enemy” websites that “are banned in your register.”

The user offered further cooperation, provided he was given the apartment belonging to the owner of the router sharing the “fi-wi,” adding that he would not say no to any other property or possessions either.

After the user who had confused Roskomnadzor with Roskomsvoboda realized his mistake, he threatened the website that “had misled him” with calling in “people in uniforms” and sent another complaint, this time to the right address.

However, the vigilante citizen did not get much understanding there either. The reply he received from Roskomnadzor pointed out that “under the ruling of the Supreme Council of the USSR of Dec. 29, 1958, the notion of ‘an enemy of the people’ has been removed from the Criminal Code of the RSFSR [Russian Soviet Federative Socialist Republic – RBTH].”

“As regards your offer of assistance in taking possession of the property belonging to the person in question, please be informed that alienation of property can take place only on the strength of a court ruling or at the owner’s discretion and in accordance with the procedure set in Russia’s civil laws,” said Roskomnadzor.