'Change of regime’ needed for Moscow and Ankara to start talking 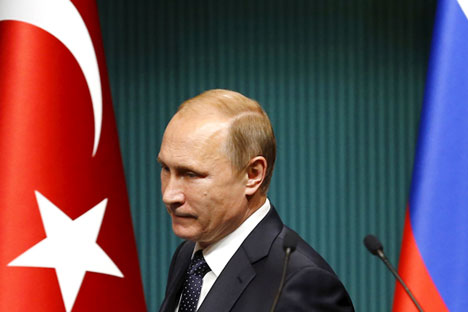 Reuters
Russian President Vladimir Putin and Turkish president Recep Tayyip Erdogan failed to meet at the UN climate summit in Paris, but made a number of harsh statements, which, Russian commentators say, have left the two leaders with no chance of reconciliation.

The UN climate conference in Paris, which opened on Nov. 30, proved rich in political statements not related to the agenda of the summit.

One of the main intrigues was the question of whether Russian President Vladimir Putin and his Turkish counterpart Recep Tayyip Erdogan would discuss the incident involving the Russian bomber shot down near the Syrian-Turkish border with each other.

Despite Putin taking part in a number of bilateral meetings (he had time to hold talks with the heads of state of the U.S., China, Germany, and South Korea, and the prime minister of Israel), no meeting with Erdogan took place.

"We have not met," confirmed Putin, and then said that Russia has received additional data about the incident with the Russian Su-24, which he claimed proved that the protection of the Syrian Turkmens is just an excuse for Turkey.

"We have every reason to think that the decision to shoot down our plane was dictated by the desire to protect oil supply lines to Turkish territory," Putin said at a news conference after the summit.

According to him, Ankara also failed to respond to Moscow's concerns about the free movement of terrorists as a result of the visa-free regime of the Russian Federation and Turkey (Russia has now abolished visa-free travel for Turkish citizens – RBTH).

"We have long asked to pay attention to the fact that representatives of terrorist organizations that have fought and are trying to fight us with weapons in their hands in some regions of Russia <...> ‘surface’ on Turkish soil."

Erdogan did not hesitate to answer and made a promise on the same evening to resign if Putin’s allegations that Turkey is buying oil from the Islamic State (ISIS) jihadist organization are confirmed.

Only a change of government will alter the status quo

It will be very difficult to restore the level of cooperation that Turkey had with Russia before the incident with the Su-24, as it was built through "considerable efforts" since the beginning of the 2000s, Leonid Isayev, an Arabist and a specialist in conflict monitoring, told RBTH in an interview.

"Putin's harsh statement, which provoked rather harsh remarks from the Turks, is capable of burning bridges with each other for years," said Isayev, who believes Russian-Turkish relations will now wither.

Of course, such a confrontation is ultimately not favorable for either Russia or Turkey or NATO, of which Turkey is a member, but in order to forget the rhetoric on the sidelines of the climate summit "at the very least a change of regime" is required – such statements are being taken too personally in both countries.

Vladimir Avatkov, a Turkologist and the director of the Center of Oriental Studies, International Relations and Public Diplomacy, agrees that a change of regime in Turkey is the only realistic way out of the crisis, though he warns that the Turkish regime should not be equated with the Turkish people.

"Yes, the Turkish regime sided with terrorism when it shot down our plane, but we must think about the future," he said, adding that Turkey is still unlikely to be forgotten as a promising partner.

Will the estrangement between Russia and Turkey affect cooperation between the various players in Syria? This question was well answered in Paris by Vladimir Putin himself, according to Viktor Nadein-Rayevsky, a senior researcher of the Institute of World Economy and International Relations at the Russian Academy of Sciences: “What kind of broad coalition is it when they stab you in the back?”

Moscow’s supply of S-400 air defense systems to Syria has radically changed the balance; the range of the radar systems covers almost all sectors of the front; the Turkish aircraft prefer not to intrude into the range of the radars and are now reluctant to bomb areas where Syrian Kurd units are located.

"The Turks used to bomb them almost every day, but these units are actually very effective in fighting the Islamists on their territory," said Nadein-Rayevsky.

Moreover, in his opinion, if the actions of Turkey strongly interfere with the partner countries' joint struggle against ISIS in Syria, NATO might try to push Ankara away from this process.

"The situation in Syria is tense as it is – if the conflict between Russia and Turkey escalates there as well, it will only work in the favor of ISIS," said Isayev.

"The alliance will take the side of the Turks, as was the case with the bomber, but they will do everything possible to prevent the parties from getting into a sharp confrontation."