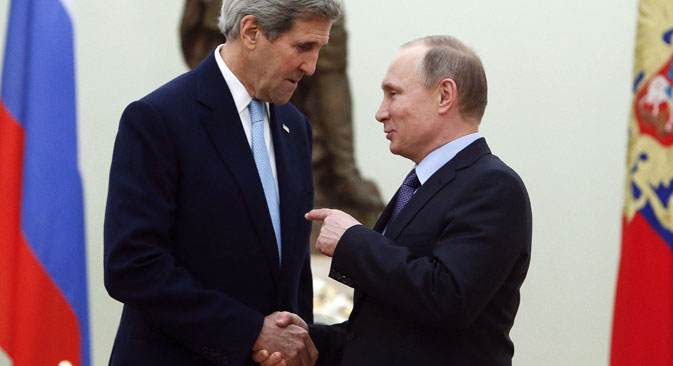 Russian President Vladimir Putin speaks with U.S. Secretary of State John Kerry ahead of a meeting at the Kremlin in Moscow, Dec. 15, 2015.

Reuters
Following U.S. Secretary of State John Kerry’s working visit to the Kremlin to discuss the Syrian crisis with Russian President Vladimir Putin and Foreign Minister Sergei Lavrov, Russian analysts believe that the U.S. position has manifested a certain flexibility, despite the two sides being no closer to agreement on the main issues.

Despite progress on identifying groups considered legitimate members of the Syrian opposition, U.S. Secretary of State John Kerry's working visit to Moscow on Dec. 15 for talks with Russian President Vladimir Putin and Foreign Minister Sergei Lavrov failed to yield any real narrowing of the gap between Russia and the U.S. on the issue of the political status of a post-war Syria or the future of President Bashar al-Assad.

Three key issues were discussed in the Kremlin: the regulation of the Syrian crisis, the implementation of the Minsk agreements on the resolution of the conflict in eastern Ukraine and bilateral relations between Russia and the U.S.

Lavrov later described the talks as "objective and concrete" in a press briefing.

Kerry, in turn, said that despite the contradictions between the positions of Moscow and Washington, “we have shown that when Russia and the U.S. move in one direction, progress can be reached."

U.S. Secretary of State John Kerry points to the window of a shop while walking on Arbat Street for souvenir shopping with Celeste Wallander of the National Security Council in Moscow on Dec. 15, 2015. Source: Reuters

The main result of the meeting, according to Andrei Kortunov, general director of the Russian Council on International Affairs, was the agreement on a precise list of Syrian opposition forces that can be called potential partners.

The parties were of the unanimous opinion that Islamic State and the al-Nusra Front, the local branch of Al-Qaida, will remain outside the framework of the political process. According to Kerry, Washington and Moscow's positions have really converged on this issue.

Another important result is the upcoming meeting of the Syrian support group on a ministerial level in New York on Dec. 18, in which Sergei Lavrov will participate. Russia expects that the meeting will lead to the UN Security Council reviewing the agreement on Syria drafted in Vienna in November.

"This meeting will serve as an additional impulse to the Vienna process, it can result in the concretization of certain phases and show the nature of the transitory political period in Syria," said Kortunov.

However, there have not been any major changes in Moscow and Washington's positions, with attitudes to the fate of Assad remaining unaltered, even though the American side reportedly demonstrated a certain flexibility.

"The U.S. is no longer adamant about a regime change in Syria," said Boris Dolgov, senior scientific collaborator at the Center for Arab and Islamic Studies at the Russian Academy of Sciences’ Middle East Institute, citing the U.S. Secretary of State.

And this, in Dolgov's view, is a "new word" in America's rhetoric.

But this flexibility should not be perceived as Washington's desire to put an end to the crisis in relations with Russia, say the observers interviewed by RBTH. The United States’ objectives in the Middle East still differ from Russia's objectives and their positions on other key world policy issues also diverge.

According to Andrei Suzdaltsev, deputy dean of the Faculty of World Economy and Policy at the Higher School of Economics, Kerry came to Moscow as U.S. President Barack Obama's special envoy to speak with Vladimir Putin about issues of interest to Obama.

But, said Suzdaltsev, we should also take into account that Kerry's appearance in Moscow is part of America's PR campaign, an attempt to hold on to the status of the fighter against world evil, a status the country strengthened after 2001 and that now it is gradually losing.