Russia, U.S. agree on steps to enhance coordination in fight against ISIS 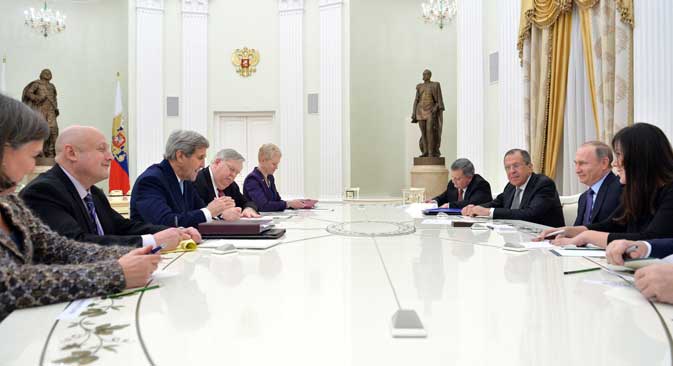 A number of steps have been agreed upon at negotiations with U.S. Secretary of State John Kerry to make the fight against ISIS (a terrorist organization outlawed in Russia) more coordinated and efficient, Russian Foreign Minister Sergei Lavrov has said.

"The agreements reached between the servicemen of the Russian Federation and the United States and the agreements related to the U.S.-led coalition acting against ISIS have been confirmed and a number of further steps have been coordinated in the practical manner to help make our parallel work more coordinated and more efficient," Lavrov told reporters on Dec. 14 after negotiations between Kerry and Russian President Vladimir Putin.

"ISIS, Jabhat al-Nusra and other terrorist groups are a common threat to all of us, entire mankind, and today we have confirmed the determination to eradicate this evil," the minister said.

In his turn, the U.S. Secretary of State John Kerry has reaffirmed the opinion of Washington that there is no place for Syrian President Bashar Al-Assad in the Syria future. Kerry said his negotiations with Putin "did not concentrate on differences over Al-Assad but rather on the political process within which the Syrians would be able to make decisions about the future of their country."

Kerry has again linked the lifting of the sanctions against Russia to the fulfillment of the Minsk agreements on Ukraine.

He said after negotiations with Russian President Vladimir Putin in the Kremlin they were hoping that the sooner the Minsk agreements would be implemented the sooner the sanctions imposed by the United States and the European Union would be lifted.

The next meeting between Sergei Lavrov and John Kerry will take place on Dec. 18 in New York.

Read more: What can we expect from Russian foreign policy in 2016?