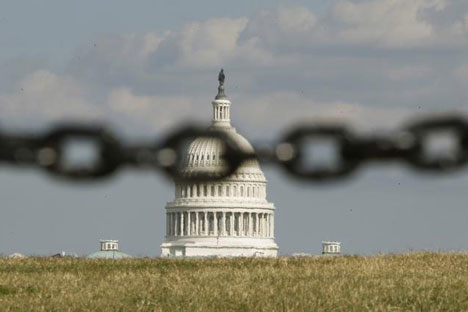 The U.S. military budget in total is proposed at $583 billion for the 2017 fiscal year.

Reuters
The White House has announced that a special sum allocated to fighting Russian influence in Europe and the former Soviet space will be included in the country's budget for the 2017 fiscal year.

The U.S. fiscal year 2017 budget will include $4.3 billion allocated "for political, economic, public diplomacy, and military support to build resilience and reduce vulnerabilities to Russian aggression among NATO allies and partner states in Europe, Eurasia, and Central Asia," according to the official White House website.

As part of that effort the budget includes $3.4 billion for the Department of Defense’s European Reassurance Initiative (ERI). For comparison, this year, a sum of $789 million has been allocated for similar goals.

The U.S. military budget in total is proposed at $583 billion for the 2017 fiscal year.

On Feb. 9, U.S. National Intelligence head James Clapper mentioned Russia, along with China, in his annual report to Congress on global threats to national security, especially in the context of threats in cyberspace. He also noted that the world was safer when the Soviet Union existed.

Relations with Russia will be the main topic for discussion at the upcoming NATO summit in Brussels, Russian business daily Kommersant reported on Feb. 10.

"The NATO leadership, as well as a number of European countries, especially the UK, Scandinavia, our Balt neighbors, Poland, Romania and some other countries, have just hysterically inflated a myth about the Russian threat, and that we plan to threaten Sweden and the Baltic countries with nuclear weapons,” Russian Foreign Minister Sergei Lavrov said to the daily tabloid Moskovsky Komsomolets on Feb. 10.

Read more: NATO vs. Russia: Why all the recent talk of World War III?