How likely is a Turkish invasion of Syria? 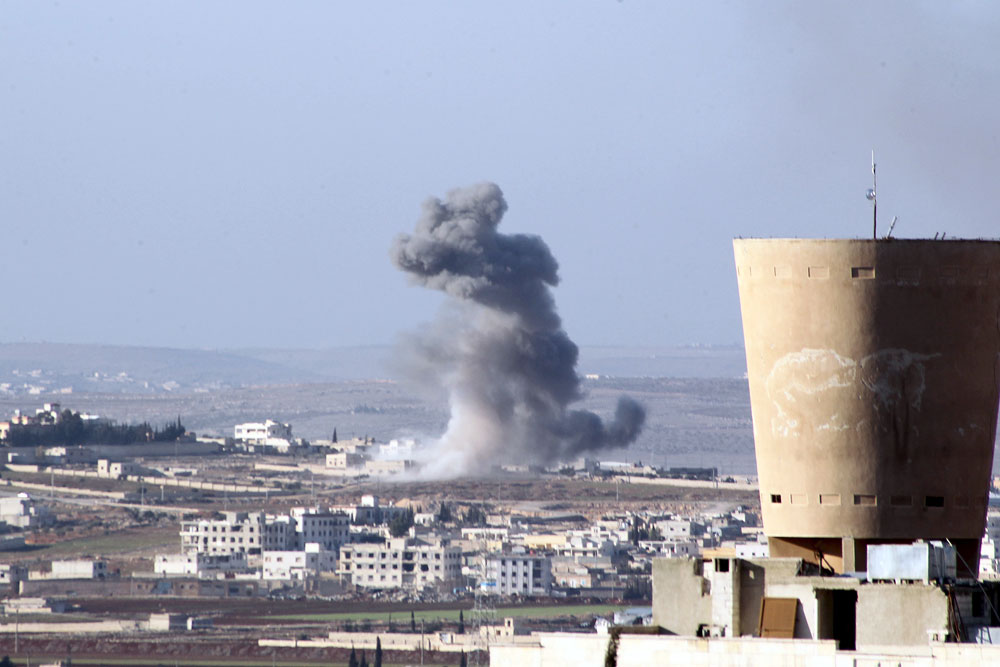 Smoke rises after airstrikes by pro-Syrian government forces in Anadan city, about 10 kilometers away from the towns of Nubul and Zahraa, Northern Aleppo countryside, Syria.

Reuters
As Syrian President Bashar al-Assad’s troops move closer to taking the strategic northern city of Aleppo, Russian observers believe that a Turkish invasion of Syria is becoming ever more likely given Ankara’s opposition to Assad’s regime and the Syrian Kurds.

The Turkish authorities have repeatedly said they do not intend to send troops to Syria, but shelling and clashes are continuing to take place on the border between the two countries as the northern city of Aleppo teeters on the brink of falling to Syrian government forces, backed by Russian airstrikes.

A scandal erupted in late 2015 after a group of Turkish troops was dispatched to Iraq without the authorization of Baghdad. A Turkish invasion of Syria appears more and more likely – especially given the long-standing tensions between Ankara and the administration of Syrian President Bashar al-Assad.

On Feb. 14 the Turkish military shelled the positions of Syrian Kurds in the north of the Syrian province of Latakia, an action justified by Turkish Defense Minister Ismet Yilmaz as a response to shelling from the Kurdish side.

Meanwhile, a few hundred militants belonging to one of the radical Turkish groups entered the country, the Supervisory Board for Human Rights in Syria reported.

According to sources in the Syrian militia, around 300 militants tried to break into a city in the north of Aleppo province.

While the Syrian foreign ministry claimed that the country had been invaded by the Turkish military along with the militants, the Turkish Ministry of Defense said that Ankara had "no thought" of invading Syria.

However, Russian commentators have expressed doubt that Ankara has no such intention.

Yevgeny Satanovsky, head of the Moscow-based Institute of the Middle East, explained to Gazeta.ru that in his view if anyone is going to launch a ground operation in Syria it will be Turkey, and that a Turkish invasion of Syria would spark off a "serious guerrilla war.”

Refugees could form pretext for attack

According to Anatoly Tsyganok, head of the Center for Military Forecasting and member of the Academy of Military Sciences, Turkey could launch a limited ground offensive north of Aleppo, with the possible aim of controlling the “secure” zone along the Turkey-Syria border declared by Turkey and the U.S. in summer 2015.

"They want to preserve the so-called secure zone whatever it takes – the Turks have said for a long time that it should not be less than 10 km," said Tsyganok.

"They want to support the [Syrian] Turkmens. The Kurds are in the same place as the Turkmens. But only a third of the Turkmens support Turkey. Another third supports the Syrian government, and the remaining third is waiting to take the winning side."

Stanislav Ivanov, senior researcher of the Department of Disarmament and Conflict Settlement at the IMEMO Center of International Security, sees the potential invasion of Syria as an extremely problematic option for Ankara.

In his view, Turkey could use the 40,000 refugees said to have recently fled from Aleppo, where residential neighborhoods are suffering from bombing, as a formal pretext for an attack.

"As for NATO and Washington, they are operating in a targeted way: They are working with the Kurds, with the Free Syrian Army, they are arming Christians – for example, they are creating an alliance to attack Al-Raqqah from the Kurdish enclaves," said Ivanov, who assesses the probability of a large-scale Turkish invasion of Syria at 10 percent.

"That's why I think that to launch a ground operation in these areas means the end of [Turkish President Recep Tayyip] Erdogan's regime. He will not take such a risk," said Ivanov.

Vladimir Yevseyev, head of the Department of Eurasian Integration at the Institute of the CIS in Moscow, agreed that a full-scale war involving Turkish troops in Syria is unlikely, but speculated that Ankara might resort to local raids and special operations on Syrian soil.

"Turkey will capture some localities near the border," Yevseyev told Gazeta.ru. "The distance from the border will be short – up to 20 km, it’s at such a distance that efficient artillery cover could be provided."

According to Yevseyev, Ankara intends to "drive a wedge" between the Kurdish factions in the Afrin and Kobane districts, but stressed that Turkey's strategic options in the region would be limited.

Any Turkish incursion would be obstructed by the Kurdish and government forces, as well as the Russian air force, which controls the air space above the country's districts adjoining the Turkish border.

However, according to Yevseyev, Turkey has ambitious plans related to Syrian territory.

Ankara's actions are dictated by the so-called National Pact, a 1920 document which, among other things, identifies the province of Aleppo as part of Turkey.

According to Russian observers, Ankara does anticipate this goal being achieved soon, but the civil war in Syria has provided the Turks with an opportunity to gain influence in lands that they consider their own.