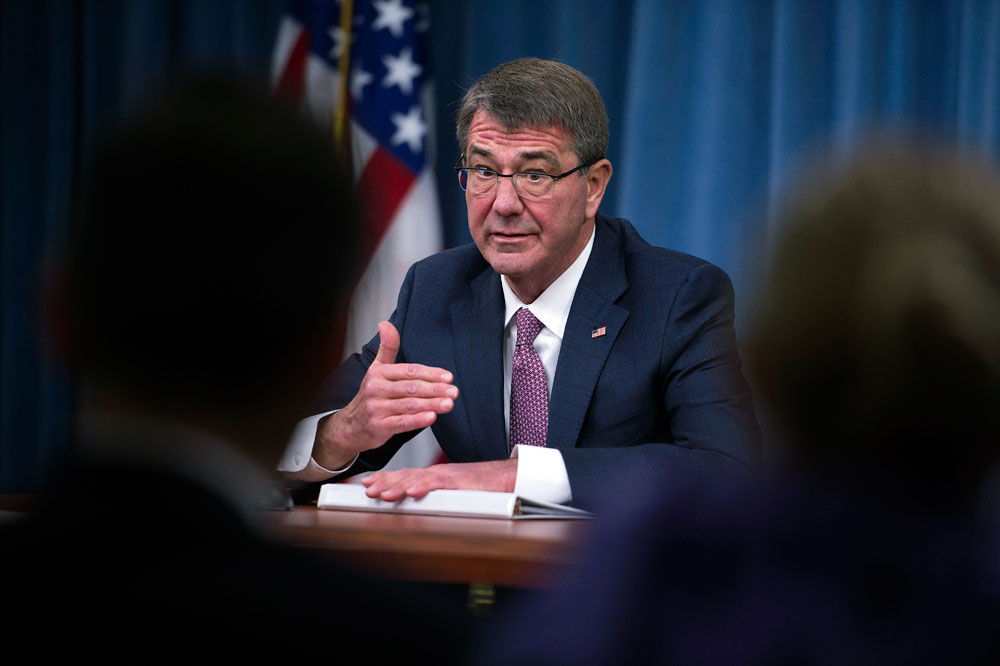 EPA / Vostock-photo
U.S. Secretary of Defense Ashton Carter has named Russia among the five growing challenges the country faces along with China, Iran, North Korea and the threat of terrorism, the Russian online newspapers Gazeta.ru and Lenta.ru have reported. These Russian media outlets suggest that Carter has exaggerated this threat in order to convince legislators to adopt his desired military budget, which is currently being threatened by sequestration.

Speaking at a Senate hearing devoted to the U.S. military budget, Carter said that the current threat levels require a new approach to investments and operations.

The Pentagon urged legislators to allocate funds in the amount of $582.7 billion for the upcoming fiscal year. The military wants to use most of it – $523.9 billion – for modernization efforts, new purchases and other internal costs of the armed forces, and $58.8 billion for ongoing military operations abroad.

The Pentagon seeks to revive its budget

During the presidency of Barack Obama, the military department budget has gradually decreased and today it is threatened by budget sequestration due to a need to reduce costs.

At the Senate hearing, Carter explained that the sequestration would weaken the army. Speaking of Russia and China, the Pentagon head called them "our most stressing competitors," as they have both developed new modern military systems that potentially threaten U.S. advantages in certain areas.

According to Carter, the U.S. Defense Department is "taking a strong and balanced approach to deter Russian aggression" in Eastern Europe.

This is not the first time that Carter has used tough rhetoric to describe potential threats by Russia against Eastern Europe. The Defense Secretary claimed earlier that in response to Russian threats, the U.S. and its NATO allies are using a new operational plan.

Carter also noted that a growing China is no less a threat to U.S. interests in the region. According to him, China's growth in itself is "fine," but its "aggressive behavior is not."

Carter has used strong terms to describe military challenges before, however,this year it has increased with theU.S. presidential election campaign lurking in the background. According to some experts, the Pentagon head hopes to retain his seat in the event that Hillary Clinton, the Democratic presidential front runner, wins the election.

Alexander Perendzhiyev, a member of the Association of Military Political Scientists think tank, said in the interview with Gazeta.ru that a reduction in the budget would not greatly affect the combat readiness of the Americans.

“The United States already has a good material base, but these funds will be spent more effectively,” Perendzhiyev says. “It is now more expedient to spend money not on the creation of new weapons, but to upgrade and improve the existing [systems]."

Perendzhiyev said that when the Pentagon had more money, the United States "controlled anything and everything."

"Now it is faced with the task of controlling the most important threats and at the current level of funding they caneasily manage this," the expert said.

Meanwhile, Anatol Lieven, a professor of government at Georgetown University in Qatar, said in an editorial published by The New York Times on March 17 that allegations that Russia is a threat to the United States could be called “alarmism.”

Lieven cited the Kremlin's decision to beginwithdrawing Russian troops from Syria as an example that demonstrates it is interested in cooperation.

"The partial Russian military withdrawal at a time when the war has entered a tenuous cease-fire demonstrates the limits of Russia’s aims and Mr. Putin’s desire to work with — not against — the United States to achieve a settlement," wrote Lieven.