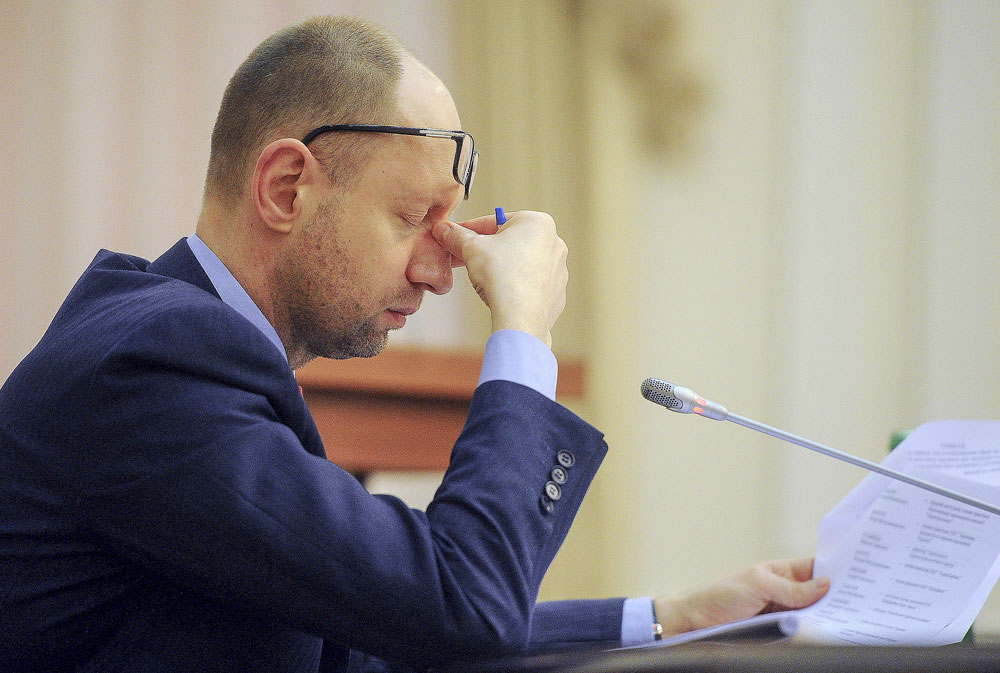 Reuters
Observers in Russia are busy commenting on Ukrainian Prime Minister Arseniy Yatsenyuk’s unexpected resignation, trying to forecast what it will spell for the complicated relations between the two countries, as well as the unresolved problems in eastern Ukraine.

The surprise announcement by Ukrainian Prime Minister Arseniy Yatsenyuk that he is to resign his post has not been especially lamented among the Russian political establishment.

Yatsenyuk revealed that he was to step down in a statement on April 10, and the Ukrainian parliament, the Verkhovna Rada, will consider his resignation and appoint a new prime minister on April 12.

It is widely expected that parliamentary speaker Volodymyr Groysman, a politician close to President Petro Poroshenko, will succeed Yatsenyuk as the country’s premier.

Yatsenyuk, who became prime minister after the Maidan protests of late 2013 and early 2014 that ended in the ousting of President Viktor Yanukovych, has never been particularly popular with Russian politicians, largely due to his harsh statements about Russia and its leadership.

Commenting on the announcement, Russian presidential press secretary Dmitry Peskov said that Yatsenyuk “did not make a mark with any contribution to normalizing relations between our two countries,” adding that in his view the politician had not made “any contribution whatsoever to the settlement of the Ukrainian crisis” in the Donbass region.

Peskov: Yatsenyuk won't be remembered for input in Russia-Ukraine relations

Russian analysts point out that Yatsenyuk’s resignation will not provoke a dramatic change in Russian-Ukrainian relations but it may have a certain psychological significance.

With Yatsenyuk gone, relations between Moscow and Kiev are likely to be marked by “less hysteria and excessive emotional intensity in the higher echelons of Ukrainian leadership,” according to deputy head of the CIS Institute think tank, pundit Vladimir Zharikhin.

No chance for Minsk accords

The Kremlin has stressed that its expectations for the future Ukrainian prime minister are first and foremost linked to the implementation of the Minsk accords, the roadmap for a peaceful settlement of the conflict in the Donbass.

Kiev and Moscow both accuse each other of not meeting their obligations, while European leaders complain that Russia is not fully implementing the agreements and pressure Ukraine to do more to resolve the political impasse that is holding back its progress on the issue.

Yet, according to Russian experts, there are unlikely to be any positive changes there. Yatsenyuk’s resignation has no effect on the real balance of political forces in Kiev, said Igor Bunin, head of the independent Center of Political Technologies.

The new government will rely on the coalition of two parties: Yatsenyuk’s party, People’s Front, party and the Petro Poroshenko Bloc. However, this coalition will not have a constitutional majority required “to resolve many issues, including the Donbass issue,” Bunin pointed out.

Under the Minsk accords, Ukraine has undertaken the obligation to amend the constitution with provisions of a special status for the Donbass. They need to be passed by a qualified majority, i.e. two thirds of the votes.

There is no way that Poroshenko will manage to secure this level of support among deputies, even if he seeks to implement the Minsk accords in earnest, said Bunin: The majority of Ukrainian deputies currently adhere to more radical positions and refuse to accept the proposed legislation on the status of the rebel regions.

Consolidation of power in Poroshenko’s hands

Yatsenyuk’s resignation will not end the political crisis that Kiev has been embroiled in for many months now, but it will strengthen President Poroshenko’s position, Russian analysts predict.

The likeliest candidate to replace Yatsenyuk, parliamentary speaker Groysman, served for several years as the mayor of Vinnitsa, the city from which Petro Poroshenko ran for parliament. Yet observers differ as to what consequences this consolidation of power in the president’s hands may have.

Vladimir Zharikhin believes that the strengthening of Poroshenko’s position brought about by Yatsenyuk’s departure will mean a weakening of the pro-U.S. group among Ukrainian politicians. Thus, the Europeans may find it easier to put pressure on Kiev to fully implement its side of the Minsk accords.

At the same time, some believe that consolidation of power in Poroshenko’s hands may, on the contrary, further postpone the implementation of the agreements.

According to Pavel Svyatenkov from the independent Institute of National Strategy, the Ukrainian president is merely paying lip service to the implementation of the Minsk accords, whereas in reality he is looking for ways of resolving the Donbass crisis with the use of force. Yatsenyuk’s resignation may simply provide him with additional opportunities.