Emphasis on bridge-building between Russia and U.S. at Elbe ceremony 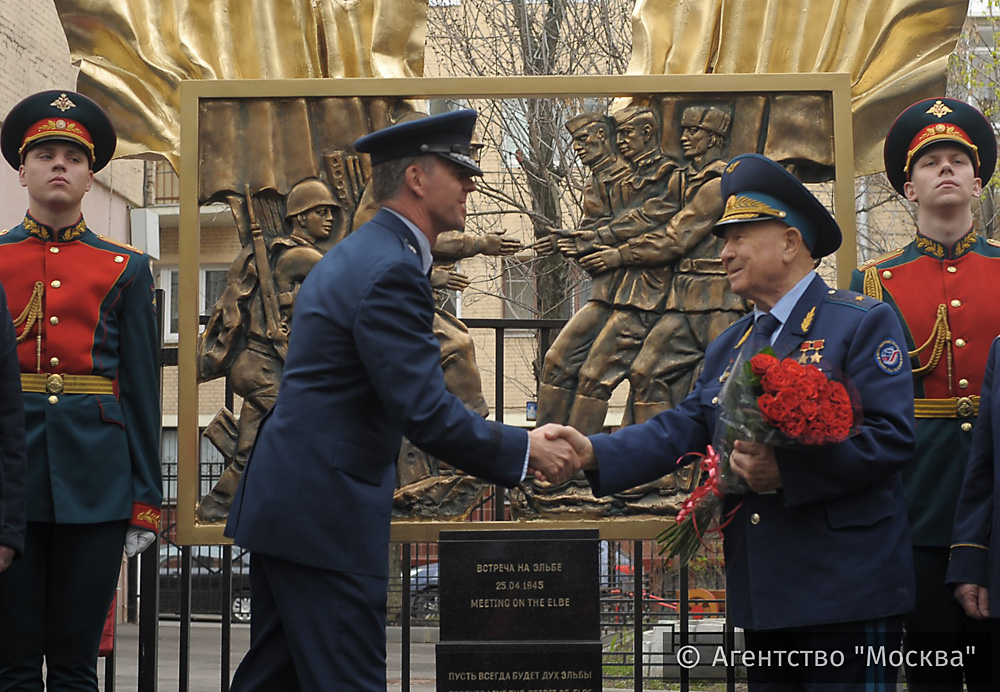 Moskva Agency
Diplomats and veterans from Russia and the U.S. have gathered for ceremonies in Moscow and Washington to mark the meeting of Soviet and American forces on the Elbe in eastern Germany in 1945.

The solemn unveiling of a sculpture dedicated to the link-up of U.S. and Soviet forces on Elbe River in 1945 took place on April 25 in Moscow in the presence of Russian and American servicemen and diplomats.

Cosmonaut Alexei Leonov, together with General Bruce McClintock, defense attaché at the U.S. embassy in Moscow, presented a bronze sculpture called The Meeting on Elbe, to the accompaniment of an orchestra. The sculpture can be found on the premises of the Burganov Museum in the center of Moscow.

"The American people express their profound respect for the enormous number of victims that the Russian people and other regions experienced during the Great Patriotic War," U.S. Embassy Press Secretary William Stevens told RIA Novosti.

"Seventy-one years ago soldiers crossed a destroyed bridge over a dangerous river in order to shake each other's hands and celebrate the fact that not only had they managed to survive but also their success in a joint effort,” said Stevens.

“Their historic meeting was one of the conclusive chapters in an extremely difficult time in our common history, their meeting proved that our countries can work together on common objectives."

"The Meeting on Elbe is a symbol of great relations between great nations. And we demonstrated to the whole world that, despite our different formations, we told the world the following words: 'Let's live together' and 'together we are better,'" said Alexei Leonov.

For Grigory Muradov, vice president of the International Cooperation Association, the ceremony served to underline the importance of international friendship and co-operation.

"Neither on Elbe, nor on the Thames, nor on the Seine do we need meetings ending bloody wars, but we need these kinds of handshakes. This subject is especially topical today. I really hope that there will be a new, robust handshake," he said.

U.S. veterans: Many things unite us

Meanwhile, a wreath-laying ceremony at the Spirit of Elbe Memorial took place at the Arlington National Cemetery in Washington.

"I'm very happy to see many young people here. There are fewer and fewer veterans today and we need to use every opportunity to thank them," Russian Ambassador to the U.S. Sergei Kislyak told journalists.

One veteran recalled how it was only when he saw the Soviet troops on the other side of the Elbe that he realized the war was over, adding that there were many things that united the two nations.

Another, Igor Belousovich, served in an American unit as a Russian-English translator. Now he is 94. "I'm glad that this modest ceremony reminds everyone that there was a time when we were allies. I hope remembering those historic times benefits both the United States and Russia," he said.

The meetings between the first U.S. reconnaissance units and the Russian soldiers took place in several places along the Elbe River.

American (left) and Russian soldiers shake hands at the destroyed bridge over river Elbe as both troops meet at Torgau, Germany. Source: DPA/AFP/East-News

On April 26, 1945 commanders from the 69th U.S. army division and the 58th guards division of the Red Army met in Torgau. It was then that the famous photograph of Robertson and Silvashko shaking hands was taken.

Elbe Day: A handshake that made history>>>