Trump paves way for nomination against all odds 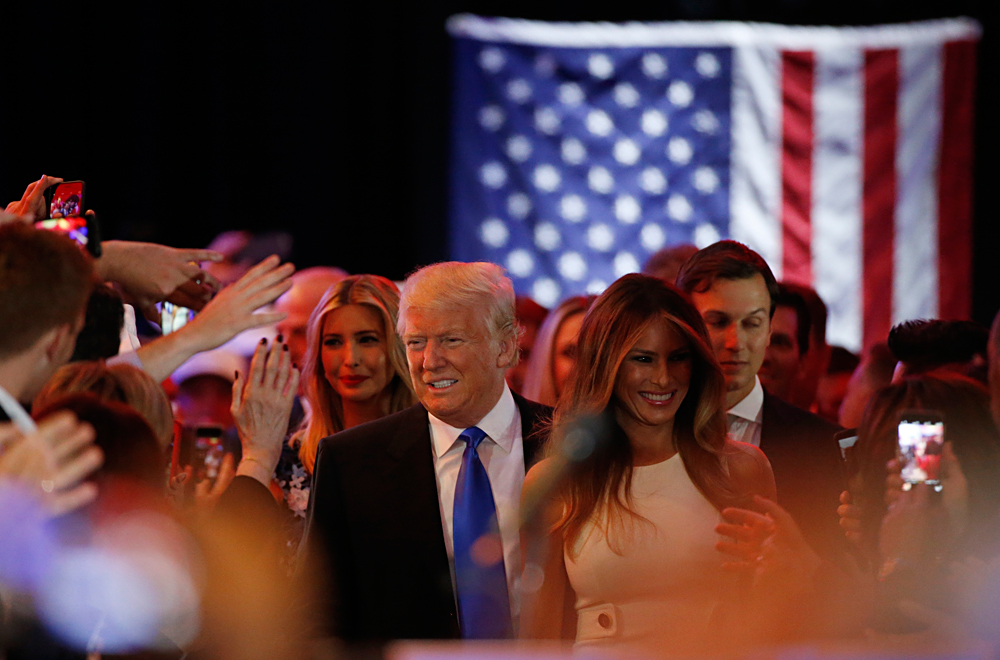 Republican U.S. presidential candidate Donald Trump arrives with his wife Melania at his campaign victory party to speak to supporters after his rival Ted Cruz dropped out of the race following the results of the Indiana state primary, at Trump Tower in Manhattan, New York, U.S., May 3, 2016.

Reuters
RBTH takes a look at what the Russian press has to say about Donald Trump’s unlikely rise to the top of the Republican Party.

Billionaire Donald J. Trump won the Republican primary in Indiana convincing Ted Cruz, his most capable Republican challenger, to leave the presidential race on May 3.“The nightmare of the American conservative elite has become a reality,” writes Rossiyskaya Gazeta, a government-owned daily newspaper.

Trump became the presumptive nominee of the Republican Party after he won over 53 percent of the votes and secured the support of  51 delegates after his decisive victory in Indiana. The title of “presumptive nominee” implies that the Republican Party has yet to confirm Trump’s candidacy, but his nomination is de-facto inevitable, explains the RIA Novosti news agency.

“The billionaire has not yet received all 1,237 votes necessary for the nomination, but these votes are secured given that he does not face serious competition in the remaining states,” writes RIA Novosti.

John Kasich, the governor of Ohio, remains the only opponent of Donald Trump on his way to the presidential bid. However, Trump clearly dominates the Republican race as Kasich has collected just 153 delegates, winning only his native Ohio, writes the RBC business daily. As we posted this article, CNBC had reported that Kasich was preparing to suspend his campaign later on May 4. Other outlets confirmed that he had cancelled a scheduled press conference and would give a statement later in the day in Ohio.

“Trump’s nomination is an unprecedented event in the modern history of the U.S.,” writes RIA Novosti. The businessman has never held public office and had made contributions to campaigns of both Republican and Democratic candidates in previous years.

Trump made a stunning dash to the Republican nomination despite being a relative novice in politics.

“When the tycoon entered the race with 16 other candidates from the party last year, his candidacy wasat best perceived as a joke and a PR attempt,” writes Rossiyskaya Gazeta.

Nevertheless, Trump not only outcompeted his fellow candidates and career politicians in the nomination race, “the billionaire also managed to overcome the fierce resistance of the party’s elite to the nomination and came close to the record in votes collected in the primaries,” writes RIA Novosti.

Trump managed to consolidate popular support among Republican voters in spite of the resistance his own party mounted against him.

“The Indiana primary should have been the first step of Ted Cruz and John Kasich to prevent Donald Trump’s nomination,” writes the business daily Kommersant.

Komersant points out that Kasich was supposed to relinquish the victory to Cruz in Indiana and then focus on winning primaries in Oregon and New Mexico, according to an agreement between the candidates.

However, the victory in Indiana eliminated the possibility of a contested GOP convention this July.This makes the eccentric businessman the candidate the Republican Party must unite around if it hopes to outbid Hillary Clinton, the frontrunner for the Democratic nomination.

Reince Priebus, the Republican National Committee Chairman, has already called for his party to unite behind Trump to defeat Clinton.

Trump could indeed be the right choice for a Republican Partypreparing to face Clinton in the general election this fall. Famous for his lavish escapades and provocative proclamations, the businessman may try to adjust his image as the general election campaign approaches.

“Trump may turn out to be a political chameleon,” writes Russia Direct, an analytical publication focusing on Russia and global affairs. “Having played the role of politically incorrect provocateur during the preliminary stages, Trump is quite capable of transforming himself into a respectable and serious candidate as the finish line approaches.”