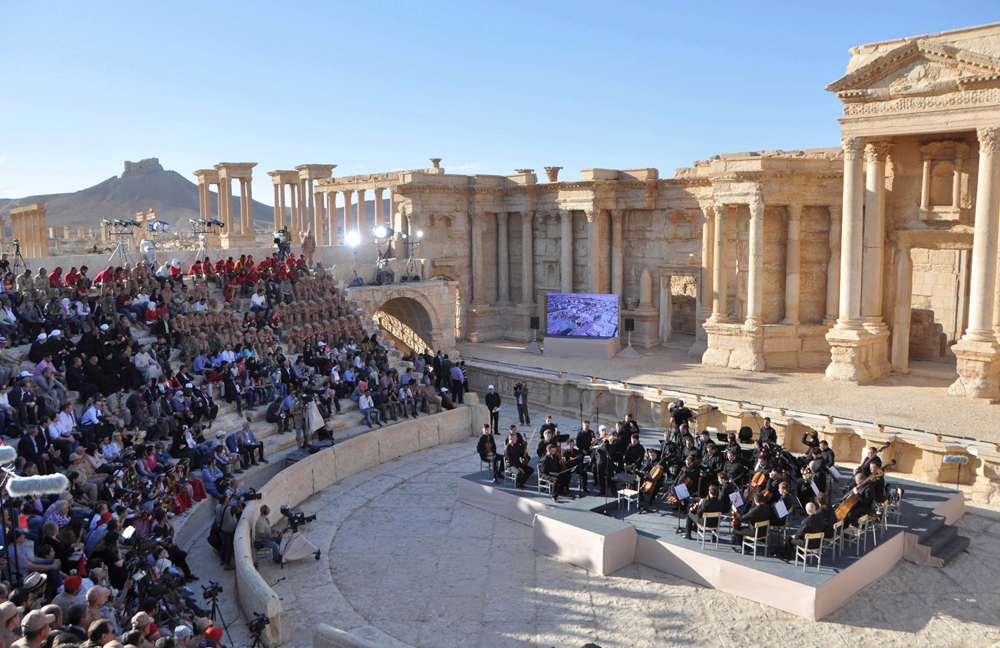 Russia's Mariinsky Theater performs at the amphitheatre of the Syrian city of Palmyra, Syria in this handout picture provided by SANA on May 5, 2016.

Reuters
An RBTH correspondent met with servicemen from the Russian and Syrian armies who participated in the liberation of Palmyra from the Islamic State and also found out what the future holds for the UNESCO heritage city.

Early in the morning our motorcade sets out on a 300-kilometer drive (about 186 miles) from Latakia to Palmyra. Cars filled with journalists are accompanied by Russian infantry and air force. On the ground the cars are protected by several high-mobility BTR-82 and Tiger (Russian Hummers) military vehicles with protection from special forces. In the air the motorcade is covered by Mi-24 Crocodile and Ka-52 Alligator helicopters.

Every 5-10 kilometers there are roadblocks with soldiers from the Syrian Army. Upon seeing the column of Russian armored vehicles and cars filled with journalists, soldiers greeted us warmly.

Six hours later we find ourselves in liberated Palmyra. Our arrival is accompanied by an artillery cannonade: the Syrian army is shelling ISIS positions. A day before there was heavy fighting in the town of Sukhna, 15 kilometers from here.

Now there is a temporary Russian armed forces base in Palmyra with Pantsir-S1 self-propelled anti-aircraft missile and gun systems for protecting troops and sappers from air attacks. Besides these I saw a few other radar systems, but no more. Information about the technology of the Russian military base is considered a state secret and is classified as "top secret."

In place of a once developing tourist destination now stand half destroyed buildings. You can see traces of artillery and tank shells. It seems there is not a single wall here that is not riddled with machinegun fire.

What is happening in Russiau2019s anti-terrorist campaign in Syria?

One of the Syrian army soldiers said that the heaviest fighting had taken place not in the historical part of Palmyra but in the urban areas where the streets are narrow and the buildings are not very tall.

"Russian aviation did not participate in these battles,” according to one Syrian soldier.“Only the infantry (Assad's army) participated and the fights at times even involved knife combat."

In his words, the main backbone of the ISIS militants consists of foreign fighters who had converted to Islam and came to participate in the civil war.

"Some came for their own ideological reasons, some were looking for easy money and some just because they wanted to fight in a war," he said.

Only half of the militants turned out to be professional, according to the Syrian soldier. The others "didn’t know what to do during the advance - they couldn't orient themselves as they stood still and they couldn't find the firing point or any shelter."

Some of the militants even started a "small business" with the hostages. The terrorists would take a person, or even a whole family, and deliver themfor money to the last roadblock in the Palmyra suburbs and "free" them.

Freedom often means finding yourself without food and water in the middle of a desert 100 kilometers from the city of Homs. Such an "escape" would require all of the person's money and often terrorists would shoot the person after the "liberation."

"A big part of Palmyra can be reconstructed"

On May 5 the Mariinsky Theater Symphonic Orchestra conducted by Valery Gergiev staged a free concert in the historical part of Palmyra for local residents and soldiers that had participated in the liberation of the city.

Gergiev said that the performance is a tribute to all those who gave their lives protecting Palmyra.

"Our concert is a call for everyone to forget their differences in front of the threat of terrorism and unite their efforts for the reconstruction of the city," he said.

Mikhail Piotrovsky, the director of the State Hermitage Museum told RBTH that the destruction in Palmyra was less than he had expected.

"Indeed more than 50 percent of the city is destroyed, but most of it can be reconstructed,” Piotrovsky said.“I think it will take about 5-7 years in order to restore Palmyra's appearance."

In the words of Russian Ambassador to UNESCO Elenora Mitrofanova, the organization will not have financial problems reconstructing the city.

"The money will be allotted from the Heritage Support Foundation,” said Mitrofanova.“This is money that comes from all the participant nations of the organization. Now the area must be inspected, the costs evaluated and a reconstruction plan drawn up."