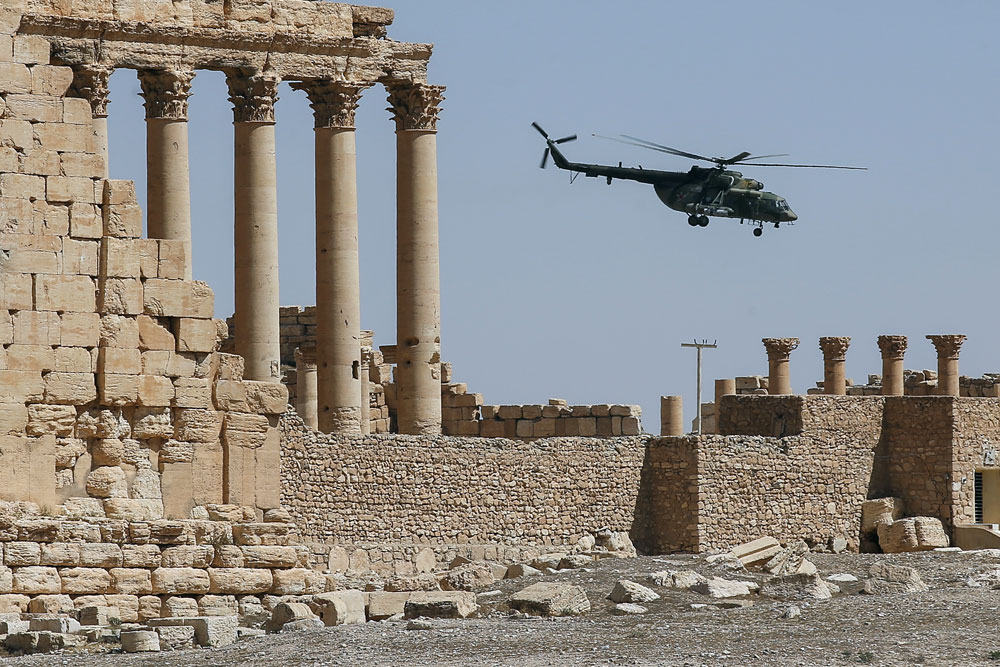 Palmyra was liberated from ISIS by the Syrian government army on March 27.

Anton Novoderzhkin / TASS
Various sources have simultaneously reported a sudden counteroffensive by Islamist militants in Syria, who are trying to cut a strategically important route connecting Palmyra and Homs. The threat of losing Palmyra may draw Moscow into a protracted military campaign, in which establishing control over the world heritage site will be key.

ISIS militants have been able to cut the road between Homs and Palmyra and disrupt supply routes used by the government forces, the London-based organization Syrian Observatory for Human Rights reported.

"Violent clashes between regime forces and Daesh [the Arabic name for ISIS – Kommersant] are ongoing,” said the organization's director Rami Abdel Rahman, describing the fighting on the distant approaches to Palmyra as "part of ISIS’s biggest assault since the army recaptured Palmyra with Russian support.”

However, according to Kommersant's source in the Russian General Staff, by mobilizing available resources government troops are managing to control the road between Homs and Palmyra, although fighting is underway to the south of the city (the most recent clash took place near a military air base, 45 miles from Palmyra).

"Both the road and the city are under our constant surveillance," he said. "Combat aircraft get involved in the protection of strategic sites as necessary, our specialists are working there."

After the return of Palmyra to the control of Damascus, there were reports that the success of the operation had opened the way for an attack by the Syrian army on Raqqa. Source: Reuters

On May 11, the Russian Defense Ministry acknowledged the death of Russian serviceman Anton Yerygin, who was seriously injured in the province of Homs, where he was escorting a convoy of vehicles of the Russian Center for Reconciliation Between the Warring Parties.

Yerygin was taken to hospital, where doctors fought for his life for two days, but to no avail. The Defense Ministry also told Kommersant that the serviceman had been posthumously honored with a state award.

Has Islamic State got its second wind?

The loss of Palmyra on March 27 was the most serious defeat for ISIS on the Syrian front, and the Islamists' attempt to regain lost ground seems logical.

A year ago, when ISIS was just preparing for its first assault in Palmyra, experts said that the specificity of Palmyra was that it was relatively easy to capture but very difficult to retain. They were right: At the end of May 2015, ISIS entered the city virtually unopposed and fortified there.

Palmyra is actually an oasis in the desert, which is easy to cut off from communications, but too much force is required to defend the surrounding area. It is not easy for the supporters of Syrian President Bashar al-Assad to concentrate such forces in the dangerous area today.

The government forces, which have suffered significant losses during the civil war, are being forced to fight a large number of opposition groups at the same time – including at Aleppo, where the situation has deteriorated sharply in recent weeks.

If events on the distant approaches to Palmyra take an unfavorable turn for Damascus, then it is possible that Assad’s army will not have enough power to defend the ancient city at the time of the assault.

Palmyra: a war of symbols

In Russia, the return of Palmyra under the control of the Syrian government is seen as the symbol of a turning point in the war against the terrorists. Yet Palmyra is also a symbol for the ISIS militants, whose tasks now include restoring their image, which has been undermined by a series of defeats.

However, in recent weeks, ISIS's failures have ended, since the government forces need time to recover their attacking potential.

After the return of Palmyra to the control of Damascus, there were reports that the success of the operation, which was achieved with the active support of Russia's Aerospace Forces, had opened the way for an attack by the Syrian army on Raqqa – the "capital" of the self-proclaimed "Islamic caliphate."

However, the offensive did not even begin. Moreover, the latest news from the province of Homs indicate that victory over the Islamists may require much more time and effort than expected.

"The Islamists have stepped up their attacks indeed and are still far from final defeat," Grigory Kosach, a professor of the Department of History, Political Science and Law at the Russian State University for the Humanities, told Kommersant.

"At the same time, Russia, which has made Palmyra a symbol of victory and staked too much on it, cannot afford to stop halfway and thus lose face in the Syrian campaign. That means that Russia may be drawn into a new phase of a protracted military campaign in Syria – with unpredictable consequences."

Read more: What is happening in Russia’s anti-terrorist campaign in Syria?