Mount Athos: Russian president on a pilgrimage to another Europe 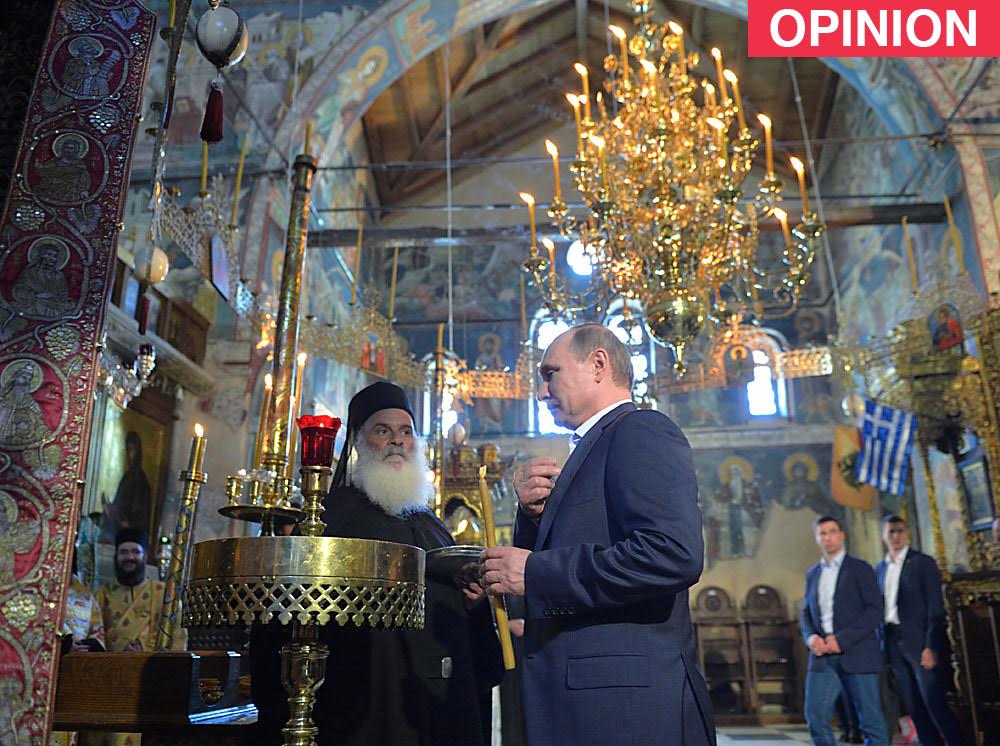 Russian President Vladimir Putin during a prayer service at the Assumption Cathedral.

EPA / Vostock-Photo
On May 28, 2016 Russian President Vladimir Putin visited Mount Athos, one of Orthodox Christianity's holiest sites, during his official trip to Greece.

It doesn’t happen very often these days that heads of states make official pilgrimages. One such pilgrimage took place this Saturday when Russian President Vladimir Putin arrived on Mount Athos. This monastic polity on an isolated peninsula in northeastern Greece is hailed by Orthodox Christians worldwide as the “Holy Mount” and the “garden of Our Lady” and serves as the perennial source of spiritual gifts and ancient monastic tradition. 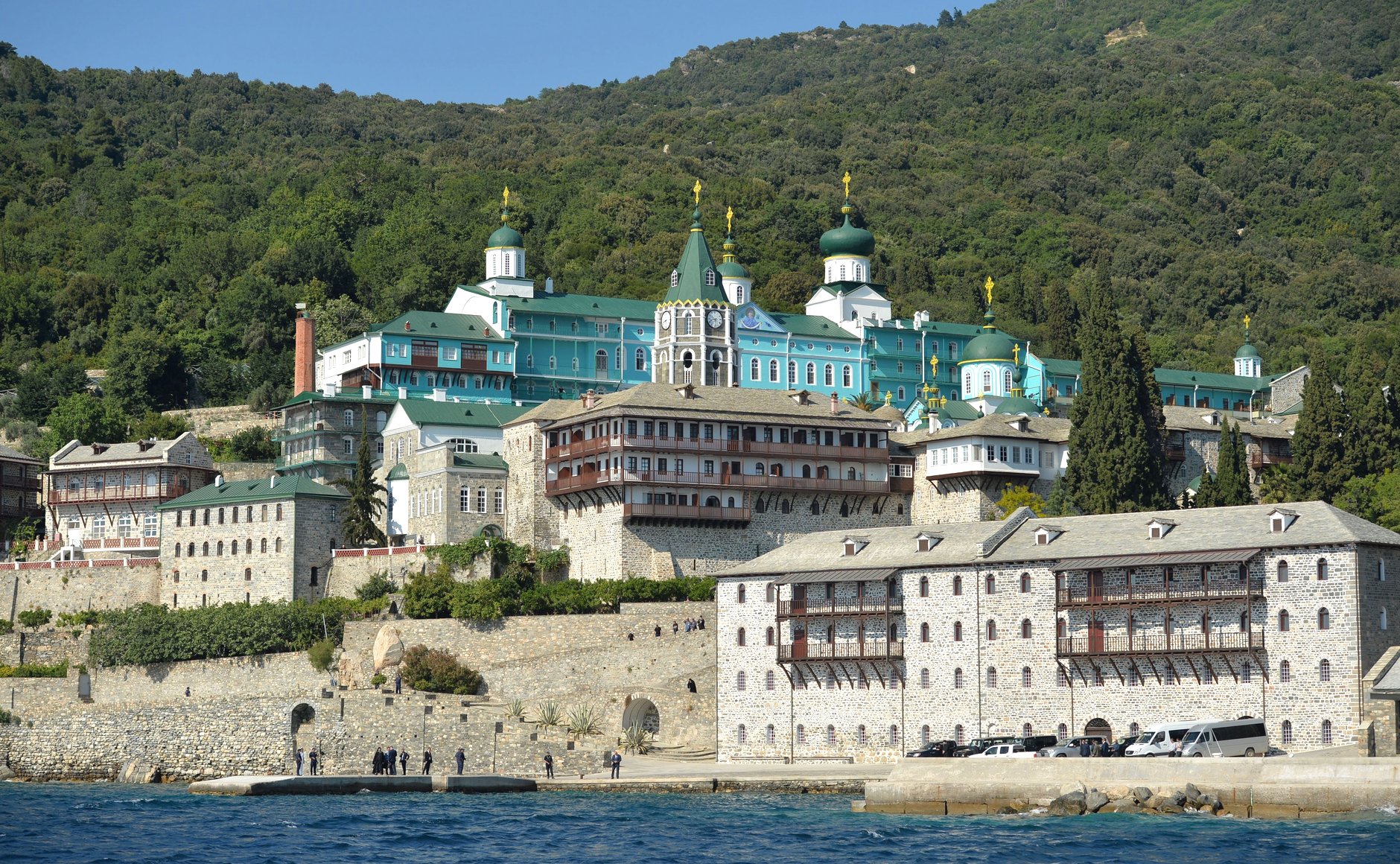 It is not Putin’s first visit to Mount Athos. In 2005, after two unsuccessful attempts, he was the first Russian head of state to set foot in this place, where Russian tsars had once competed with Ottoman Sultans through their respective patronages. Nor is he the only international dignitary who comes here – Britain’s Prince Charles is perhaps the best-known frequent visitor. 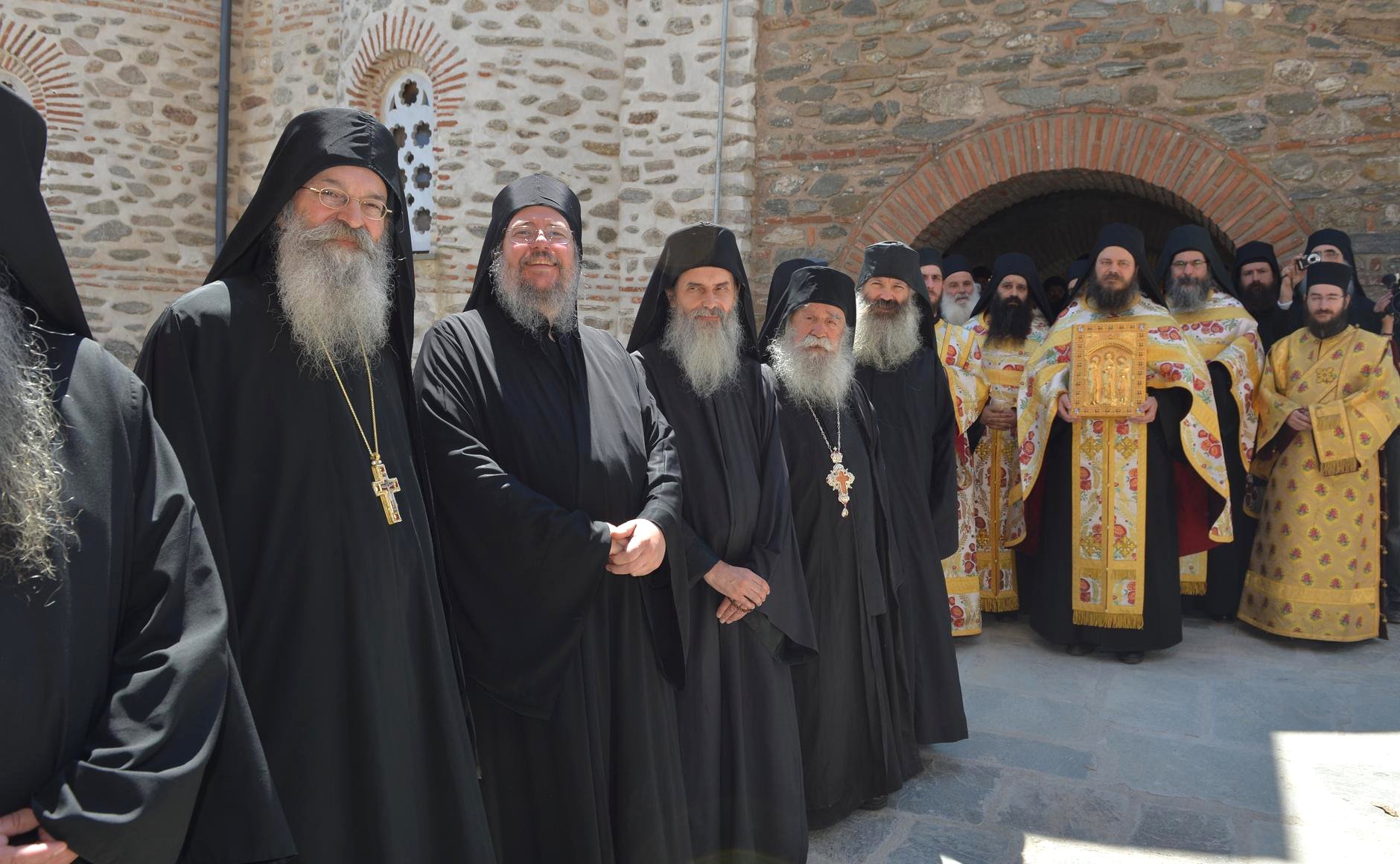 Prior to Vladimir Putin’s arrival in Karyes. Source: Kremlin.ru

Yet this is the first time that the head of the Russian state and the head of the Russian Orthodox Church, Patriarch Kirill, are here together. They are marking the high point of a big campaign to observe the millennium of the Russian presence on Athos. The anniversary is being commemorated this year with dozens of exhibitions, conferences and church services to highlight modern Russia’s leading role in what has come to be known as Orthodox Christian civilization.

A document from 1016 bears the signature of Gerasimos, the hegumen (abbot) of the “monastery of Ross,” which is interpreted as proof that by that time monks from the medieval state of Kievan Rus, who converted to Christianity just 28 years before, had already established a presence in this Byzantine center of monasticism. What is more certain is that in the following decades and centuries, beginning with the Kiev Monastery of the Caves, Athos monks of various ethnic backgrounds had a huge effect on the way Christianity developed in the northeastern Slavic lands that today constitute Russia, Ukraine and Belarus.

Moscow’s most revered icon, which guards the entrance to Red Square, came from Mount Athos. The chapel that houses the icon was raised by the Soviets and restored in the 1990s. A copy of the icon was brought to Russia by Greek monks at that time. From the 14th century onwards, monasteries all the way north to the White Sea and east to Siberia were built to imitate the principles of Athos. Meanwhile, the tradition of pastoral care by monks of prophetic talents known as elders (“startsi”), also originating from Athos, gained importance in Russia in the 19th and 20th centuries. 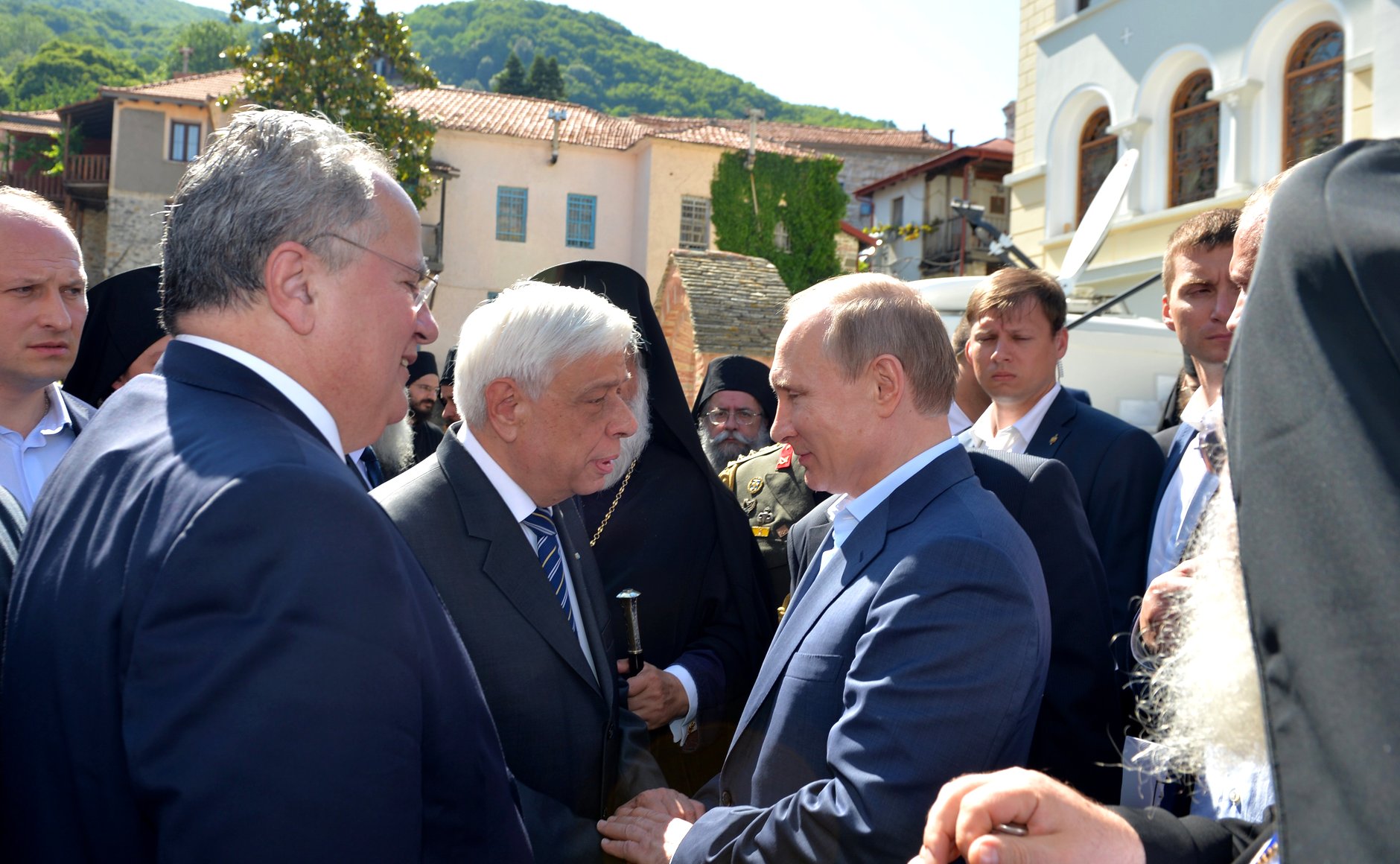 While donations from Russian tsars and nobles were plentiful, it was the thousands of Russian pilgrims and monks that poured in to the monastery southeast of Thesalloniki that kept the Russian presence alive. In the early decades of the 1900s Russian monks outnumbered Greek, Serbian, Romanian and Bulgarian ones until Soviet atheism came close to extinguishing the Russian presence. This history is important for Russia, for Putin and his presidency.

“We have great respect for Greece as a whole and for Athos in particular,” Putin said on his previous visit in 2005. “And if Russia is the biggest Orthodox power, Greece and Athos are its sources. We remember it and value greatly.”

In the run up to the current anniversary, Russian state and private donors, many of whom constitute an informal club of regular pilgrims to Athos, invested millions of euros into the reconstruction of the Russian St. Panteleimon Monastery and its dependencies on the peninsula. Led by a 100-year-old abbot, St. Panteleimon is one of 20 monasteries under the aegis of the Istanbul-based Ecumenical Patriarch, which today constitute the unique multiethnic monastic polity. It has its own senate and governor and its own rules, such as barring any female from entry, which date back to the edicts of Byzantine emperors and are safeguarded in the Constitution of Greece and in special clauses concerning the country’s entry into the European Union. 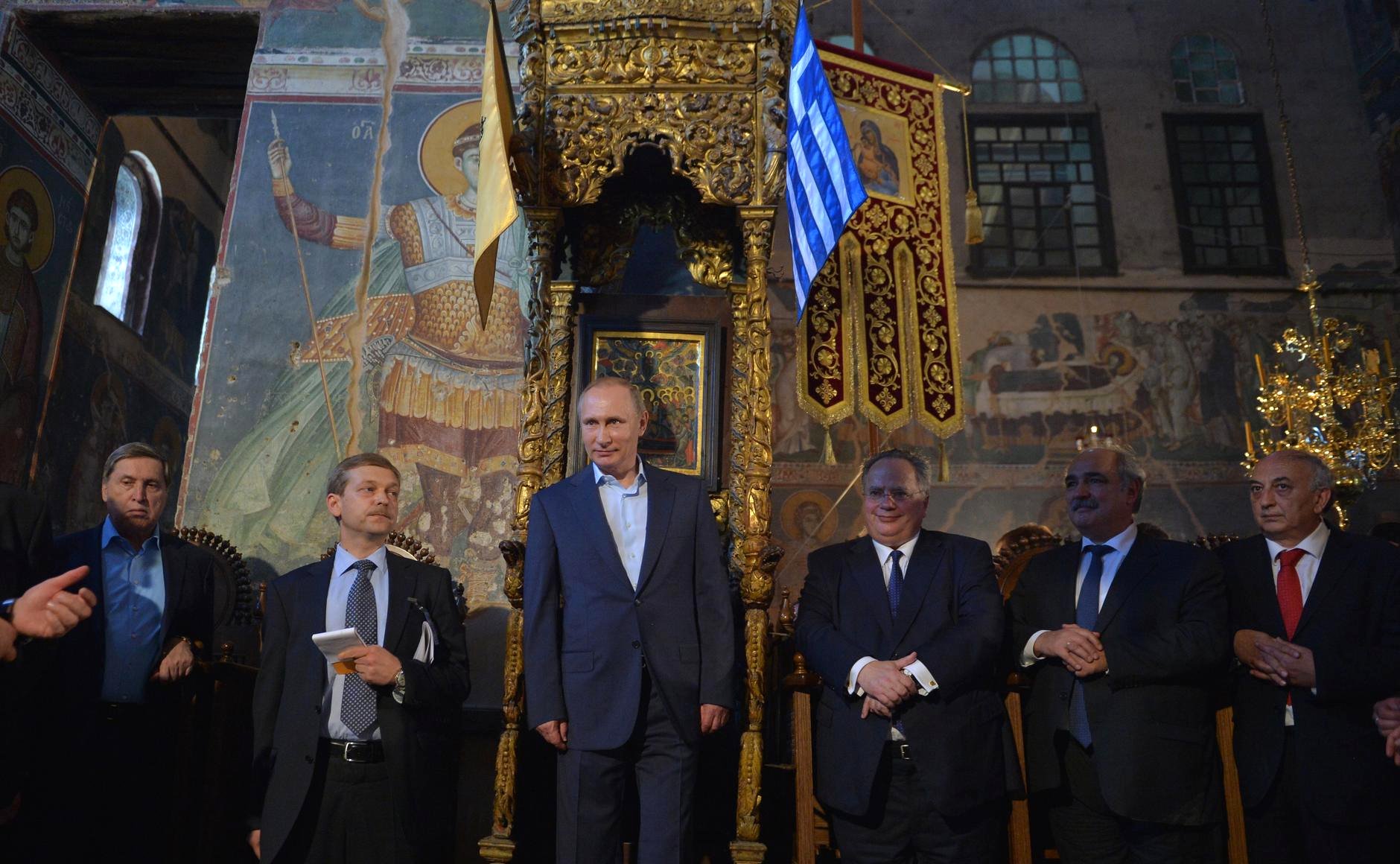 During a prayer service at the Assumption Cathedral. Source: Kremlin.ru

Ask any pilgrim to Athos and he will speak of it as a unique place of personal connection to God. The Russian president and patriarch are certain to have their own personal spiritual experiences connected to this place. Yet what are important for the public at large are the political messages that this visit carries both for the wider world and for the Russian public at home. 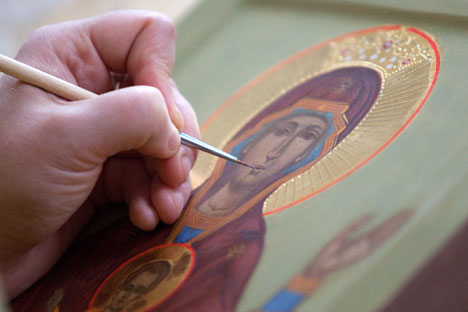 Read more: How to read and comprehend a Russian icon>>>

When President Putin and Patriarch Kirill inspect the recent renovations of the historically Russian facilities in this microcosm of the unruly family of national Orthodox Churches (in which Russians and Greeks often vie for dominance) and when they pray together in a special service to the Russian saints who have lived on Mount Athos, they will emphasize Russia’s position among the heirs to Byzantium. That is a heritage, which is by all means European, but markedly not Western. They will also stress that the church and state in today’s Russia stand together, following the Byzantine model of “symphonia,” a close cooperation of the divine and earthly powers, which runs contrary to the Western notion of separation between church and state. 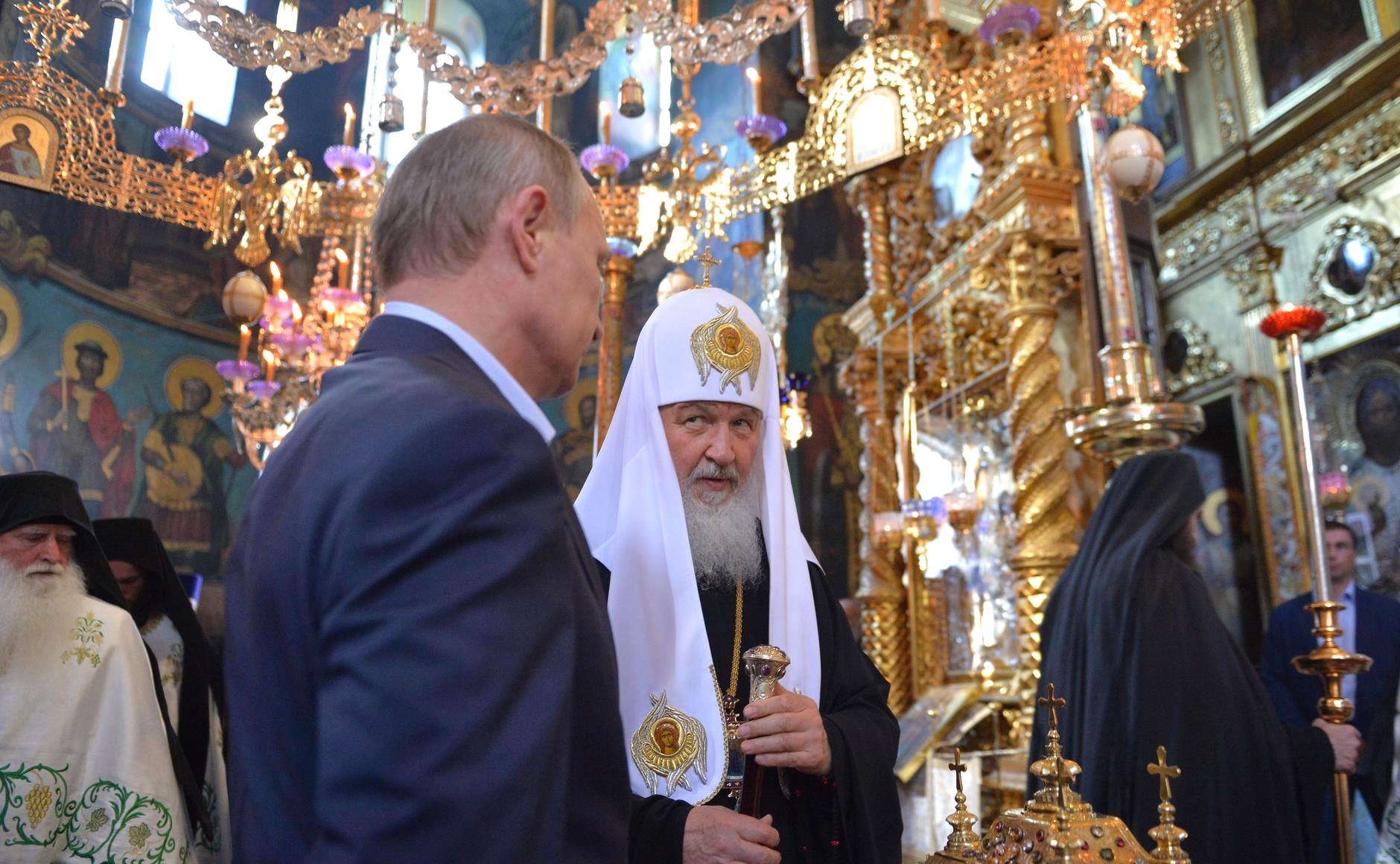 Visit to Rossikon – the St Panteleimon Monastery on Mount Athos. With Patriarch Kirill of Moscow and All Russia. Source: Kremlin.ru

Athos monks are known for their ultra-conservatism in social and family matters, opposition to relations with Western Christianity and strong criticism of U.S.-dominated globalization and secularization at least as much as they are for their ascetic endeavors, spiritual heights and virtues of Christian love. By visiting this autonomous enclave of the EU, which does not subscribe to the dominant liberal European values of gender equality, human rights and freedom of movement, the Russian president and patriarch will pay homage to the “other Europe” of traditional Christian values – as opposed to those of the Enlightenment – that seems besieged by the winds of modernity.

Both Putin and Patriarch Kirill have on many occasions stated their opposition to the hegemony of Western liberalism manifested most acutely in the adoption of gay marriage legislation, and would like to see Russia as a natural center for Western social conservatives. To make that statement once again on friendly European soil when Russia and the EU are going through the lowest point in their relationship due to the crisis in Ukraine, a millennium of common Russian and Ukrainian presence in this unique part of Europe is a spectacular occasion.