‘Sabotage’ in Crimea: What will be Moscow's next move? 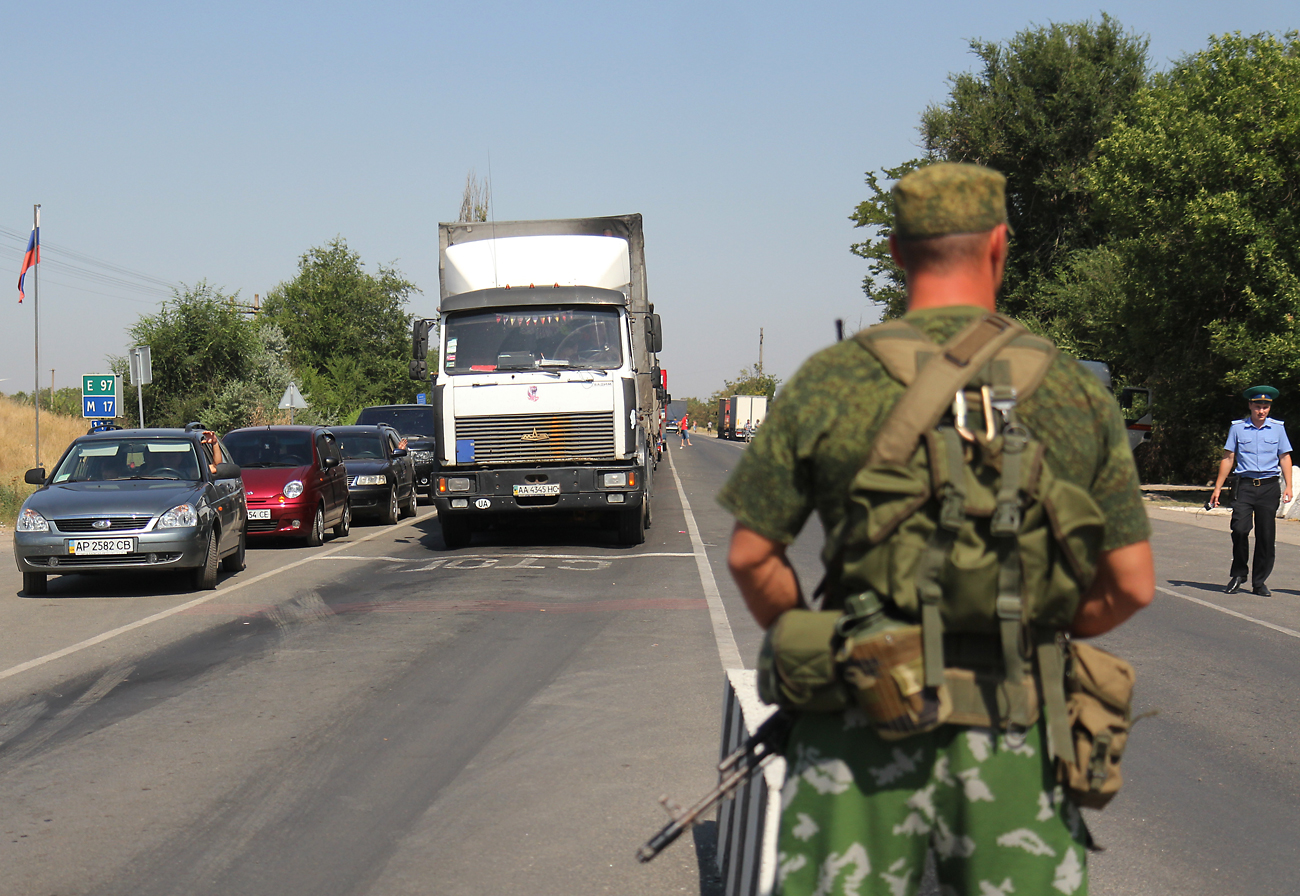 Vehicles standing in queue at the checkpoint "Armyansk", at the Ukraine-Russia border.

Andrey Iglov/RIA Novosti
After Russia's FSB accused Ukraine of attempting to create a series of terrorist attacks in Crimea, the question is – how will Moscow respond to this alleged provocation? Russian observers believe that the “attacks” were supposed to have a long-term effect, but the main issue is not Crimea – it is the Donbass.

The already frigid relations between Russia and Ukraine have now been further complicated by a strange incident involving Crimea: On Wednesday, Aug. 10 Moscow accused Kiev of preparing terrorist attacks on the disputed peninsula.

According to Russia's Federal Security Service (FSB), the “Ukrainian saboteurs” were active members of Ukraine's special forces. They divided themselves into two groups and tried to cross into Crimea carrying home-made explosive devices, as well as ammunition, grenades, mines and weapons. The FSB says that after detaining the saboteurs, it learned that an entire network of agents was functioning in Crimea. Two Russian officers allegedly died in the clash

Russian President Vladimir Putin has promised that Moscow "will not close its eyes to these things," saying that the alleged actions of the Ukrainian government are "terrorist practices" and "a very dangerous game."

He added that he no longer sees any meaning in holding the next scheduled meeting of the “Normandy Four,” referring to the periodical negotiations between the leaders of Russia, Ukraine, Germany and France on regulating the Donbass conflict in southeastern Ukraine. The meeting had been planned for September in China.

The Ukrainian government denies any link to the detained terrorists, calling the incident "fantasies" and a pretext "for more military threats against Ukraine." Ukraine's theory is that the Russian military staged the whole incident by shooting at Russian FSB border guards. Now Ukraine intends to call a UN Security Council meeting.

The FSB says that the detained, who are citizens of both Russia and Ukraine, have confessed to their act. Their supposed targets were tourist facilities and they were carrying explosives with 40 kilograms of TNT. However, the “saboteurs” say that they did not intend to detonate them near people; they just planned to blow up various parts of a resort in order to create panic and "destroy tourism."

While one group reportedly broke through the Russian-Ukrainian border in vehicles owned by the Ukrainian armed forces, the other used an alternative route and was supposed to leave the explosives in a prepared cache.

A Ukrainian saboteur (R) detained by the Russian Federal Security Service in Crimea. The detainee confessed planning a number of attacks using explosives in Crimea. Source: A still from a video, courtesy of the FSB Public Relations Center/RIA Novosti

Russian observers interviewed by RBTH believe that Russia's response to the incident will depend on Ukraine.

However, Alexander Khramchikhin, deputy director of the Institute of Political and Military Analysis, believes a military operation is possible “if Ukraine continues such provocations.”

For now Moscow will limit its actions to diplomatic measures – a severe warning and carrying out operational activities with its special forces within Russia. According to the Kommersant business daily, additional troops and armored vehicles have already been sent to northern Crimea.

"It is extremely difficult for us to respond to this. Never does a country, any country, admit that it employs sabotage groups. And now the most important thing is not to provide a motive for people to accuse Russia of aggression against Ukraine. Not one Russian bullet must be fired into Ukrainian territory," said Andrei Suzdaltsev, deputy dean of the Department of World Economy and Politics at the Higher School of Economics in Moscow.

Is it all related to the Donbass?

However, many Russian observers not only see a provocation in the reported incident but a "multi-move plan" on the part of Ukraine.

"This issue is not about Crimea, it's about the Donbass," noted Suzdaltsev. "Crimea is a separate territory and it is the fight for the rebellious east that is forcing Ukraine to act in this way."

Kiev is looking for possibilities to intensify relations with Russia in order to refuse implementing the Minsk-2 Agreements and then accuse Moscow of aggressive intentions, says director of the Center for Political Affairs Alexei Chesnakov, who is close to the Kremlin.

In Suzdaltsev's opinion, the Ukrainian government needs certain achievements before the elections, such as the return of the Donbass to Ukrainian control. But with Russia providing support to the Donbass rebels it is impossible.

However, if Ukraine is really behind the incident, it has put itself in a difficult position. The FSB reported the Crimean “attack” only a few days after it occurred – it first had to collect the proof. According to Russia, the detained leader of the saboteurs is a man named Yevgeny Panov, who it says is an officer in the Main Directorate of Intelligence of the Ministry of Defense of Ukraine.

"We have two Russian corpses. The Ukrainians killed them on Russian territory. This is very serious," said Suzdaltsev.

Klintsevich, meanwhile, believes that the situation is “obvious” and that, with “interrogation recordings” at its disposal, the UN Security Council will not risk giving its unequivocal support to Ukrainian President Petro Poroshenko.