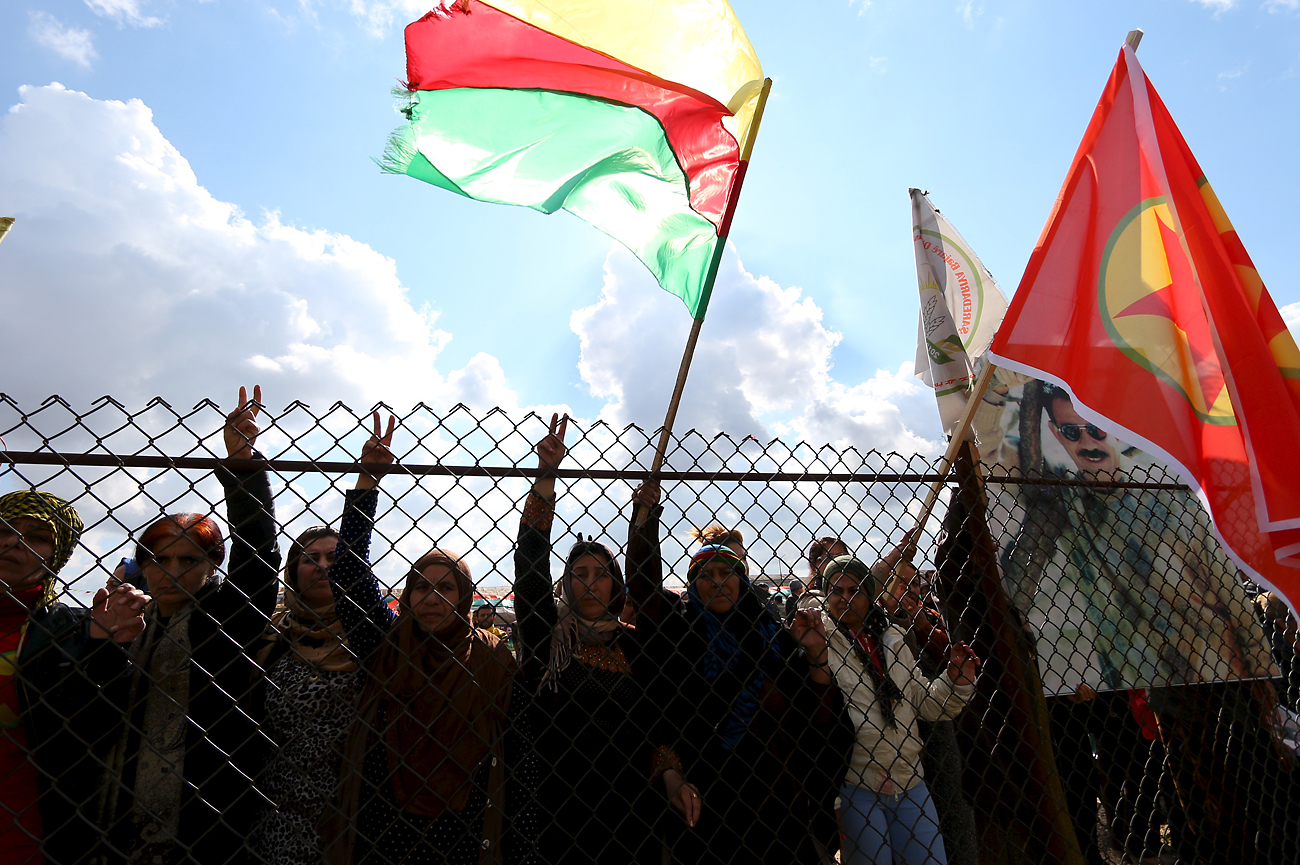 Kurds protest on Feb. 9, 2016 in the city of al-Derbasiyah, 2016, on the Syrian-Turkish border, against what the protesters said were the operations launched by the Turkish security forces against the Kurds.

Reuters
The situation in Syria was one of the principle issues during the talks between the Russian and Turkish presidents in St. Petersburg on Aug. 9. However, neither leader has made many comments on the matter. RBTH analyzes the agreements on Syria that Russia and Turkey may conclude, as well as the issues that it will be impossible to agree on.

The fight against Islamic State

Analysts are certain that it will now be rather easy for Russia and Turkey to find common ground on the fight against ISIS militants in Syria. The series of terrorist acts that have occurred in Turkey in the last months, and that have been linked to ISIS, has played a big role. ISIS has become a direct threat to Turkey's security.

In the opinion of Sergei Demidenko, Middle East expert at the Institute of Social Sciences at the Russian Presidential Academy of National Economy and Public Administration, reports of Turkey buying ISIS oil, for example, may have been true, but it is not a fact that the Turkish government was behind the deals.

"Ankara's ties to ISIS were not political but semi-underground. Everyone wants to benefit at someone else's expense but this does not mean that [Turkish President Recep Tayyip] Erdogan himself was responsible for it," explained Demidenko.

Irina Zvyagelskaya from the Institute of Middle East Studies at the Russian Academy of Sciences noted that "Turkey has been rather consistent in this issue [in its policy towards ISIS – RBTH].” This was related to the fact that Ankara considered Islamic State the main weapon in the fight against Syrian President Bashar al-Assad.

Experts say that by now Turkey has partially changed its approach to the Syrian president. While earlier Ankara was categorically against Assad remaining in power, later its position softened. Zvyagelskaya points out that Turkey has agreed to Assad remaining president during the transitional period. In this light she sees certain possibilities of Moscow and Ankara cooperating on the Syrian issue.

Viktor Nadein-Ranevsky from the Institute of World Economy and International Relations at the Russian Academy of Sciences believes that while Assad is still an enemy for Erdogan, Russia and Turkey can find common ground in the process of forming a future coalition government in Syria.

The issue of the Turkish-Syrian border

For Russia one of the main problems is the issue of the Turkish-Syrian border. Russian officials have said on many occasions that militants and ammunition for armed units fighting Assad are entering Syria from Turkish territory. In the event the border is closed, it will be easier for Assad and his allies to defeat his opponents.

But Russian analysts believe that it will be practically impossible to obtain this from Ankara. Alexander Shumilin, director of the Center for Middle East Conflict Analysis at the Russian Academy of Sciences’ Institute of U.S. and Canadian Studies, says that Ankara is playing a game in Syria that it “cannot renounce, and therefore Turkey cannot close the border."

Shumilin believes that Turkey is opposing the Syrian Kurds, who it thinks are linked to the Turkish Kurds fighting for autonomy. That is why, as he emphasizes, the Turks are passionately interested in supporting the units fighting against the Syrian Kurds.

According to Zvyagelskaya, the Kurdish issue is Turkey's red line. Ankara will do everything possible in order to prevent any kind of Kurdish state from appearing on its borders, which is why closing the border is basically unrealistic.

Russia's support for the Syrian Kurds

Zvyagelskaya believes that another bone of contention between Moscow and Ankara is an issue that is also related to the Syrian Kurds: their support from Russia. Several months ago the first Syrian Kurd representation center outside Syria opened in Russia. Moscow is constantly trying to have Kurds be separately represented at the Syria talks in Geneva.

In Zvyagelskaya's view, supporting the Syrian Kurds is a crucial issue for Russia since the Kurds have proven to be consistent opponents of the Islamists. Their forces provide effective opposition to the ISIS radicals.

Read more: Erdogan understands how he can use Russia to his advantage>>>