Vladimir Putin drops hints about a solution to the Kuril dispute 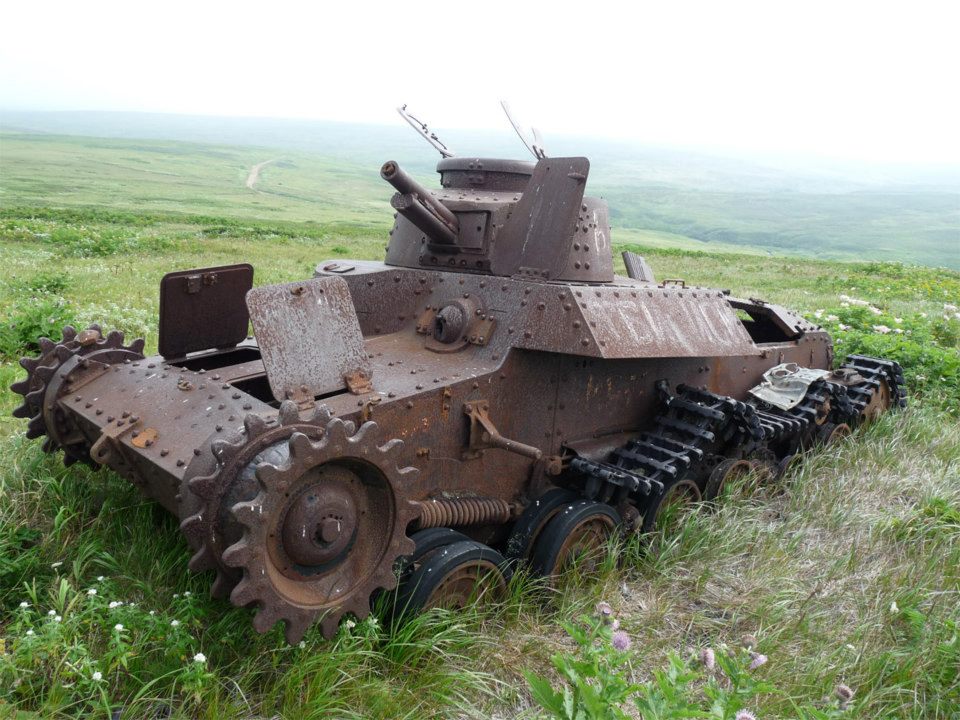 Japanese tank Type 97 Chi-Ha knocked out during the Battle of Shumshu, in the Soviet invasion of Shumshu in the Kuril Islands. Now most of the tank wrecks on the Island are being shipped to the Museum of the Great Patriotic War, Moscow, and are being restored.

Phil DeFer (Flickr.com)
At the Eastern Economic Forum in Vladivostok and the G20 summit in Hangzhou, Russian President Vladimir Putin suggested that a decision to sign a peace treaty with Japan had been made, but added that the negotiations were still ongoing. One of the basic options is, apparently, the joint declaration signed by the USSR and Japan in 1956.

On the sidelines of the G20 summit in Hangzhou, China, Russian President Vladimir Putin said that a compromise on the Southern Kuril Island territorial dispute could be achieved. A starting point is a joint declaration between the USSR and Japan in 1956. It mentions the transfer of two Southern Kuril Islands to Japan.

“The agreement, however, had many blank spots,” Putin said. “For example, it is unclear what conditions are required for the transfer, and who has sovereignty over these islands.” These questions, obviously, are the main stumbling blocks in the territorial problem, which Moscow and Tokyo have been plagued with since the end of World War II.

Why Russia will not return the Southern Kurils to Japan
Speaking last week at the Eastern Economic Forum in Vladivostok, Japanese Prime Minister Shinzo Abe urged Putin to settle the bilateral dispute. “Let's put an end to this abnormal situation that has existed for 70 years, and together begin to build a new era of Russian-Japanese relations that will last for the next 70 years,” Abe said.

The problem of the Lower Kuril ridge

After Japan's surrender in September 1945, the islands that belonged to Japan following the Russo-Japanese Treaty of 1855, - Iturup, Kunashir, Shikotan and the Habomai group - became part of the USSR. Japan refused to recognize the jurisdiction of the Soviet side. The countries never signed a peace treaty.

In 1956, Moscow and Tokyo reestablished diplomatic relations and said in a joint declaration that a peace treaty would be prepared. The text of the declaration to reestablish relations suggested that the USSR give Habomai and Shikotan Islands to Japan after the conclusion of a peace treaty. This is the document that Putin referred to at the G20 summit.

Despite the fact that in 1956 the two chambers of the Japanese Parliament ratified the declaration, the Japanese side, as was recently underlined by Putin, refused to implement it. After a diplomatic scandal in 1960, the Japanese side stated that it would “relentlessly pursue” the return of all the islands. Since then, the dialogue was interrupted.

Over the years the Japanese public has developed an absolute consensus on the sovereignty of what they called the Northern Territories.

Georgy Kunadze, former deputy head of the Soviet and then Russia Foreign Ministry, who was involved in the negotiations with the Japanese in the 1990s, says a resolution of the Kuril issue is difficult as both sides are not ready to change their positions.

This year, Russia and Japan will mark the 60th anniversary of the 1956 declaration. This milestone could be used as a good opportunity for a major shift in the issue of the Kuril Islands. Both parties recognize this declaration, which is the current legal document having the character of an international treaty.

According to Pavel Gudev, a leading researcher at the Center for North American studies, Institute of World Economy and International Relations (IMEMO), a diplomatic breakthrough would be possible if the Japanese side altered its irreconcilable position.

If this shift happens then there could be a number of possible solutions, says Gudev. One of them is so-called deferred sovereignty. This means that the islands would come under the jurisdiction of Japan in 50 or even 100 years. A possible option is that Japan be given only the land without the surrounding waters, the expert added.

Given the fact, that currently the Kurils make the Sea of Okhotsk an inland sea of Russia, the parties could also agree to restrict navigation in the area to Russian and Japanese ships. Russia would demand that no military infrastructure be built there. Herein lies the problem. To get the Japanese to close the U.S. military base on Okinawa is almost impossible, Asia Times military analyst Grant Newsham wrote in a column (http://atimes.com/2015/10/us-military-bases-on-okinawa-still-an-essential-deterrent/).

“Okinawa is a perfect place from which to deploy and conduct a range of military operations to counter an aggressor or someone seeking to upset long established rules regarding freedom of navigation and flight, and even international boundaries,” Newsham wrote.

A potential American desire to have a base close to Russian waters may be an obstacle in the settlement of the dispute. However, there is a possibility that the parties will announce a compromise on the Kuril Islands during the state visit of Putin to Japan in December.