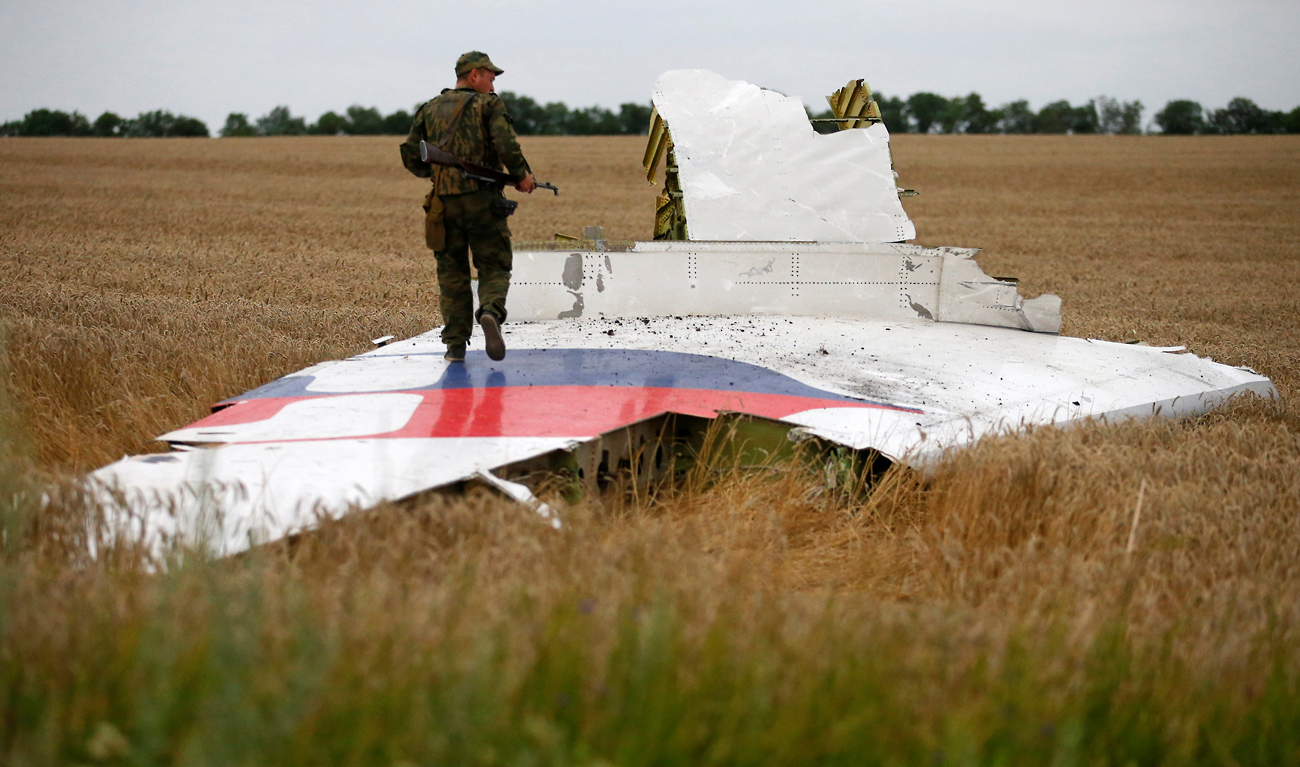 The Malaysia Airlines Boeing 777 plane crashed near the settlement of Grabovo in the Donetsk region, July 17, 2014.

Reuters
The team researching the cause of the crash of Malaysian Airlines Flight MH17 has determined that the aircraft was brought down by a missile launched from eastern Ukraine. Russian experts counter the claims by saying not all information related to the crash was taken into account and that Russia has become the world’s scapegoat.

The Dutch-led Joint Investigation Team (JIT) tasked with determining the cause of the crash of Malaysian Airlines Flight MH17 published the second part of its report on Sept. 28.

After more than two years of investigations, the team has determined that the missile that brought down the airliner was fired from a BUK 9M38 missile fired from a field about 5 miles south of the town of Snezhnoye in eastern Ukraine — territory that at the time of the crash was controlled by rebel militias.

The launch site was determined from satellite images provided by the U.S. and Ukraine along with statements and photographs provided by witnesses.

The possible scenarios into the downing of flight MH17 are put on display during a press conference by the JIT on the preliminary results of the investigation in Nieuwegein, Netherlands, Sept. 28, 2016. / Source: AP

In announcing the release of the report, Dutch prosecutor Fred Westerbeke said that the commission has a list of about 100 names of people who might have been responsible for firing the missile and that the investigation into who fired the missile and who gave the order will continue. The report will be submitted as evidence in any court cases brought over the disaster.

Leaders of the self-proclaimed Donetsk People's Republic (DPR) immediately rejected the conclusions of the JIT report, calling them "lies," and the evidence, a distraction from the team’s inability present any “real proof.”

"They are making these declarations, but no one can present the evidence found in the U.S. photographs," said Eduard Basurin, deputy director of the DPR Defense Ministry, in an interview with Govorit Moskva radio. "Two years have gone by, but no one has seen these photographs. And Ukraine refuses to show the air space in its radars. They are deceiving everyone, they are lying.”

The photos to which Basurin was referring were shown when the report was presented and include photographs made by witnesses showing how the BUK was transported to the site as well as photographs of a scorched spot on the field, from which the missile was supposedly fired.

An hour before the JIT presentation began, Russian Presidential Press Secretary Dmitry Peskov said that the militias were irrefutably not involved in the crash of MH17, citing as evidence new data presented by Russian investigators two days earlier.

This evidence consists of information gathered by Russian radars along the Russian-Ukrainian border. According to the information, the missile could have been fired only from the side controlled by the Ukrainian army and therefore excludes the possibility that the missile was fired from the territory controlled by the militias. "The information is unambiguous and it shows no missile. If there had been a missile, it would have been fired only from the other territory," said Peskov. "…This is something you can't argue with, you can't discuss it."

This latest Russian argument is not considered in the final report prepared by the investigative group.

‘Russia is guilty of everything’

Russian experts agree that, following the publication of the latest findings, global public opinion will blame Russia for the tragedy regardless of whether or not Russia is implicated by an international court.

Vyacheslav Igrunov, director of the International Institute of Humanitarian-Political Research, said that the question of Russia’s guilt has already been answered by the Western elite. "And even if a court does not find Russia guilty, I don't think this mood will change,” Igrunov said. “Moreover, I don't think a court will pronounce a contrary verdict. In the best case, it will say that there was not enough evidence."

Russia is unlikely to recognize the jurisdiction of any court to which the matter might be referred, however.  "It will judge us in absentia," said Andrei Suzdaltsev, deputy dean of the faculty of World Economy and Politics at the Higher School of Economics, noting that the consequence of any judgment could be very bad for Russia — and not just politically. A judgment could result in the seizure of Russian state property abroad.

Alexander Gusev, president of the International Union of Experts, thinks that the long time spent on the investigation is a sign that Russia is not actually to blame. "I assure you, we will never know the real reasons, because if Russia was in any way involved in this catastrophe, I am convinced, the West would have done everything necessary and published the material immediately, without waiting two-and-a-half years after the catastrophe," Gusev said in an interview with Kommersant radio.

Suzdaltsev noted that the timing of the report’s release was unfortunate, coming as the West and Russia faced off again over policies in Syria.

"The report accidently coincided with heavy discussion about the events in Syria: the bombing of Syrian government army positions and the outrage over the destroyed humanitarian convoy, for which Russia is being blamed," Suzdaltsev said.

On Sept. 26, UK Foreign Secretary Boris Johnson requested that sanctions against Russia be introduced because of the bombing of an aid convoy heading to Aleppo on Sept. 19. On Sept. 28, several officials in Washington expressed support for Johnson’s position.

Russian experts consider the introduction of new sanctions either over the incident in Syria or MH17 to be unlikely, however, as Russia was widely considered responsible for the airline disaster even before the investigation results were announced. Additionally, following the rounds of sanctions to which Russia already has been subjected due to its actions in Ukraine, there are few sectors left in which sanctions are still possible.

Nevertheless, Russia's response to the new report is unpredictable.

"Until now we have responded carefully and with restraint to accusations directed at us (with the athletes on the eve of the Olympics, for example), not initiating a strong confrontation. Tactically this is true, but practically there are problems. Russia is guilty of everything — this is turning into an axiom," Suzdaltsev said.