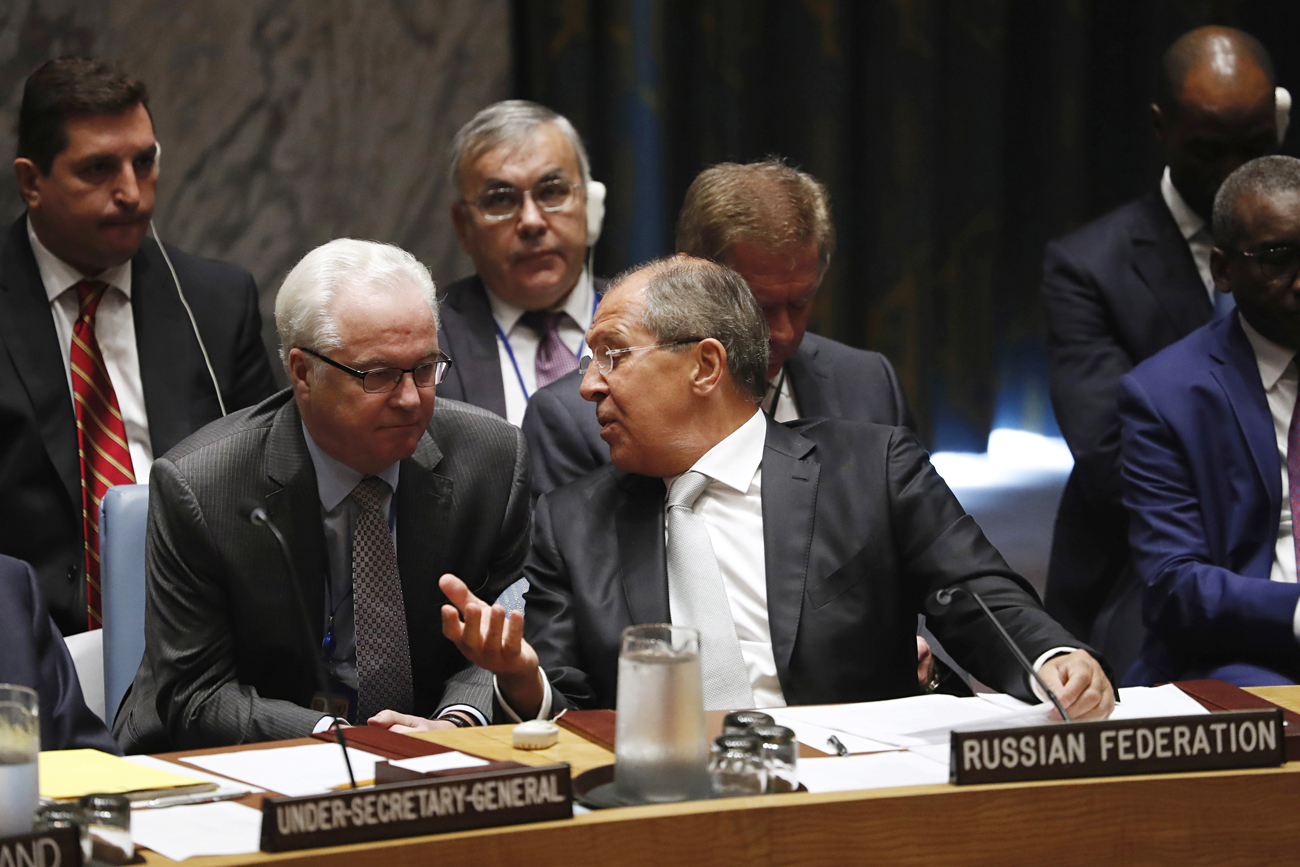 Russian Foreign Minister Sergei Lavrov reacts while U.S. Secretary of State John Kerry addresses Russian actions in Syria during a meeting of the United Nations Security Council to address the situation in the Middle East during the General Assembly for the 71st session of the U.N. General Assembly at U.N. headquarters in New York, U.S., Sept. 21, 2016.

Reuters
Russia and the Western countries have taken turns to block draft resolutions on Syria submitted to the UN Security Council. Russian analysts believe that both the situation in Aleppo and the atmosphere in the international arena are too tense for diplomacy to succeed.

The U.N. Security Council considered on Oct. 8 two draft resolutions on Syria, but did not adopt either of them. The first option, calling for an immediate ceasefire in the partly besieged Syrian city of Aleppo and the establishment of a no-fly zone (it was drafted by France and Spain), was vetoed by Russia.

Russia's ambassador to the United Nations, Vitaly Churkin, instead presented an alternative draft, which proposed that Staffan de Mistura, U.N. special envoy for Syria, hold consultations on the withdrawal of Jabhat al-Nusra (Al-Nusra Front) militants from eastern Aleppo to halt the fighting in the city.

This draft, in turn, was voted down by nine Security Council members, including the UK, U.S. and France. China supported the Russian draft resolution and abstained from voting on the French-drafted one.

The essence of the disagreement

The failure of the two draft resolutions was no surprise. At the beginning of the Security Council session, Churkin called it "one of the strangest mise-en-scenes in history," saying that he was confident that all the participants were "well aware that neither of the two drafts will be adopted."

Churkin had previously indicated that it was not acceptable for Russia to restrict the actions of its air force in Syria under pressure from the Security Council, which it would have been forced to do by the introduction of a no-fly zone.

In the eyes of the West, Russia is not seeking a peaceful settlement of the conflict, but a military victory for Syria’s embattled president Bashar al-Assad. The leading Western nations argue that rejection of a no-fly zone will lead to further bloodshed. In turn, Russia criticizes the West for what it claims is an unbalanced stance on Syria and latent support for “terrorism.”

"Thanks to your actions today, Syrians will continue to lose their lives in Aleppo and beyond to Russian and Syrian bombing,” British U.N. Ambassador Matthew Rycroft told Churkin.

Commenting on the outcome of the Security Council meeting on its official Facebook page, the Russian Foreign Ministry accused the authors of the French-drafted resolution of "an attempt by banning military flights in the vicinity of Aleppo to provide cover for Jabhat al-Nusra terrorists. According to the Foreign Ministry, the initiators of the draft are "obsessed with the idea of unconstitutional power in Syria."

Leonid Isayev, a senior lecturer in the political science department at the Higher School of Economics in Moscow, said that the French-drafted resolution could not have been adopted due to inflamed passions.

"Due to the scandals that broke out after the shelling of the Syrian army by the Americans in Deir al-Zor [on Sept. 17] and the attack on the humanitarian aid convoy in Aleppo [on Sept. 19, allegedly carried out by Russian planes], the parties have taken fundamentally opposing positions and are not ready to talk," he told RBTH.

"Perhaps it would have been possible to find a compromise on the French resolution," admitted Isayev, who explained that France had failed to persuade Russia of the benefits of its settlement draft. "But it is necessary that passions be cooled. Now any Russian or Western initiative will be received by the other party with hostility."

This is a view shared by Vasily Kuznetsov, head of the Center for Arab and Islamic Studies of the Institute of Oriental Studies at the Russian Academy of Sciences.

"At this stage we cannot expect a diplomatic solution," said Kuznetsov. "It's not just about the destructive position of the U.S., sharply accusing Russia of everything that is happening in Syria. The participants of the conflict within the country themselves are not now seeking a settlement."

Now that the settlement has failed, Assad is seeking to achieve a decisive military victory in Aleppo, Isayev noted.

"The Syrian regime is clearly going to take advantage of the fact that the situation on the battlefield is more favorable to them than to the rebels," he said. He believes that Damascus expects to proceed with a political solution only after victory in Aleppo has been achieved. This would give it an important advantage in negotiations.

Gorbachev: The world has reached a dangerous line; it is time to stop

Kuznetsov, however, is not convinced that Assad’s troops, even with the military support of Iran and the Russian air force, have the adequate capacity to take Aleppo. But even if they manage to capture the city, Damascus is stretched to its limits, and will still need to negotiate, he said.

He also noted the importance of the United Nations as a negotiating platform – despite its current failures, there is no alternative to a resolution of the conflict within the framework of the UN.

"De Mistura's group did a lot of work, developed a large number of materials for a transition period – so when the peace process is started, it will not be from scratch. This is important," said Kuznetsov.