Who is behind the killing of Donbass commander ‘Motorola’? 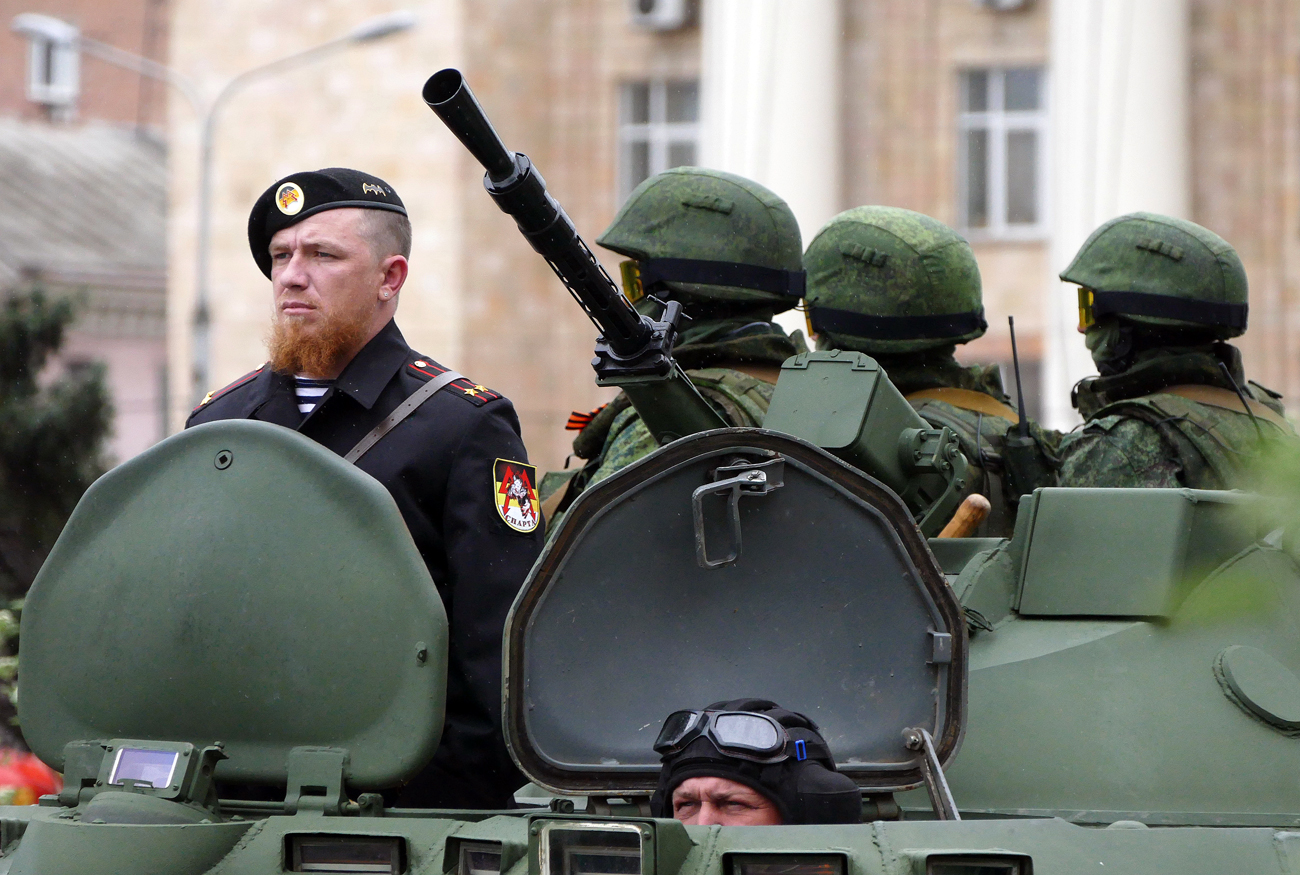 Arseny Pavlov (left), also known as 'Motorola', during the rehearsal of the military parade in Donetsk.

Igor Maslov / RIA Novosti
A Russian warlord known as "Motorola" has been killed in the Donetsk People's Republic in eastern Ukraine, where he commanded the breakaway territory’s rebel forces. The identity of those responsible for the murder is unclear, with both Russia and Ukraine argue the rebel’s death is in the other’s interests.

Arseny Pavlov (aka "Motorola"), a Russian national who was the self-proclaimed field commander of the breakaway Donetsk People’s Republic (DNR) in the Donbass region of eastern Ukraine, has been assassinated, casting further doubt on the sustainability of a fragile truce.

A symbol of the Russian-backed rebellion against Kiev in the region that began in 2014, Pavlov was blown up in the elevator of his apartment building on the evening of Oct. 16.

The DNR authorities accused the Security Service of Ukraine (SBU) of being behind the killing. Zakharchenko said the assassination was "a challenge" for the republic and effectively announced the escalation of the military conflict, threatening the already fragile Minsk peace process.

"As I understand it, [President of Ukraine Petro] Poroshenko has violated the truce?" he said. "Now wait. Enough is enough, we are tired of tolerating and promising."

A military vehicle near an apartment building in Chelyuskintsev Street, Donetsk. Pavlov was killed in an explosion when a bomb detonated inside an elevator of his apartment block / Source: Mikhail Sokolov / TASS

Two days after the murder, Zakharchenko said that Pavlov had been killed by the SBU, calling it "terrorism on a state scale." According to him, particular names will be announced after an investigation.

The Ukrainian authorities have denied any involvement in Pavlov's death, with Interior Ministry spokesman Artyom Shevchenko saying that it appeared he had been killed “by his own cronies in the misanthropic terrorist international.”

Who was the man known as ‘Motorola’?

Although his formal title was not too high (People's Militia Lieutenant-Colonel), Pavlov enjoyed media popularity and great prestige among the rebels.

Pavlov, who joined the ranks of the DNR militia, gained notoriety after he began to provide journalists with GoPro footage of battles. The cameras were attached to the helmets of rebels who participated in the battle for Donetsk airport in 2014, and "Motorola" (so named because he had served in communications) gave the orders.

This "reality show" was beneficial for the commander: He developed a heroic image on DNR-friendly media outlets. He gained additional notoriety after admitting that he had personally executed 15 Ukrainian soldiers.

The Minsk Agreements: 2 years, 2 deals – but no peace in Ukraine

According to some media reports, Pavlov's act was reported by a witness who had been among prisoners-of-war; according to others this was announced by Pavlov himself. "I don't give a fuck about what people accuse me of. I shot 15 prisoners. I don't give a fuck. No comment," "Motorola" allegedly said.

During this time, Pavlov survived several attempts on his life, the last time a bomb explosion in June 2016. So it appears unlikely that the death of "Motorola" is not merely down to chance – especially considering that this happened amid another escalation of the situation along the contact line between the rebel-held territories of the Donbass and areas under government control.

Why was ‘Motorola’ targeted?

If it was Ukraine that was responsible for the killing, why was it so important to kill Pavlov, rather than Zakharchenko or Plotnitsky? Sources in Russian military circles attribute it to the slain commander's hefty influence. Since spring 2016, Zakharchenko has begun to lose influence over the republic's army, and Motorola's Sparta detachment was his only reserve.

"He was an irritant to the Ukrainian leadership, he was not just an experienced field commander," Andrei Suzdaltsev, deputy dean of the Faculty of World Economics and Politics at the Higher School of Economics in Moscow, told RBTH.

"Operating with forces that were worse equipped [than the Ukrainian army], he was well oriented on the battlefield and enjoyed great authority," said Suzdaltsev.

The Security Service of Ukraine (SBU) has identified him in photographs taken during demonstrations in the eastern Ukrainian city of Kharkov in March 2014, before the rebels seized key buildings in several cities, setting themselves on course to a confrontation with the government in Kiev. The EU had placed Pavlov on its sanctions list.

"Kiev has set the task of destroying the active fighters against the Maidan [revolution], of decapitating the resistance," said Suzdaltsev. "Several attempts have also been made on the life of Zakharchenko. Kiev has announced an ATO [antiterrorist operation], effectively legitimizing such actions,” he said, adding that the DNR, of course, saw things the other way round – for them the killing was “a pure act of terrorism."

However, according to SBU head Alexander Tkachuk, Russia could have "removed" Pavlov as a witness for the Russian side.

Pavlov’s killing is useful for Russia, said Tkachuk, since the warlord had witnessed many events and “could provide concrete names of members of the Russian security forces who gave orders to kill Ukrainians in the Donbass.”

Will it disrupt the Minsk process?

And yet, no matter how Pavlov was important for the DNR, his death is unlikely to affect the military conflict.

"I don’t think it's possible," said Valery Khomyakov, director of Russia’s National Strategy Council and a political analyst. "'Motorola' is not as significant a figure as to slow down the Minsk process. The DNR does not play an independent role in this. If the DNR's leaders do not want escalation, it means that Russia does not want it."

The Minsk agreement and the reasons for current Russia-Ukraine tensions

And while it looks like an "act of provocation," Suzdaltsev said, it does not mean that the DNR will succumb to it, and Zakharchenko's words are likely to be just populism.

"Shells keep falling on people's roofs, it is very difficult to restore the lives of the population when they are held under fire for the third year," said Suzdaltsev, insisting that Moscow is still satisfied with the Minsk agreements and interested in de-escalation.

Russia has refrained from sharp comment on the death of its citizen, Arseny Pavlov, because it is "not yet time," he explained, saying that any actions in defense of the Donbass are immediately interpreted by the West as interference in Ukraine's affairs. "But I do not think we will stay out of these events," he concluded.

Meanwhile, the Kremlin noted that the killing of the rebel “is not favorable to the process of the implementation of the Minsk agreements.”

"It is true that the security situation on the line of demarcation [in the Donbass] is poor, provocations continue,” said presidential spokesman Dmitry Peskov, describing rumors that have appeared on the internet about that Pavlov is to be posthumously given a Russian state award “the emotional reaction of Donbass representatives,” which has nothing to do with the official position of the country.