As Ukraine peace talks fail again in Berlin, did Putin have other aims? 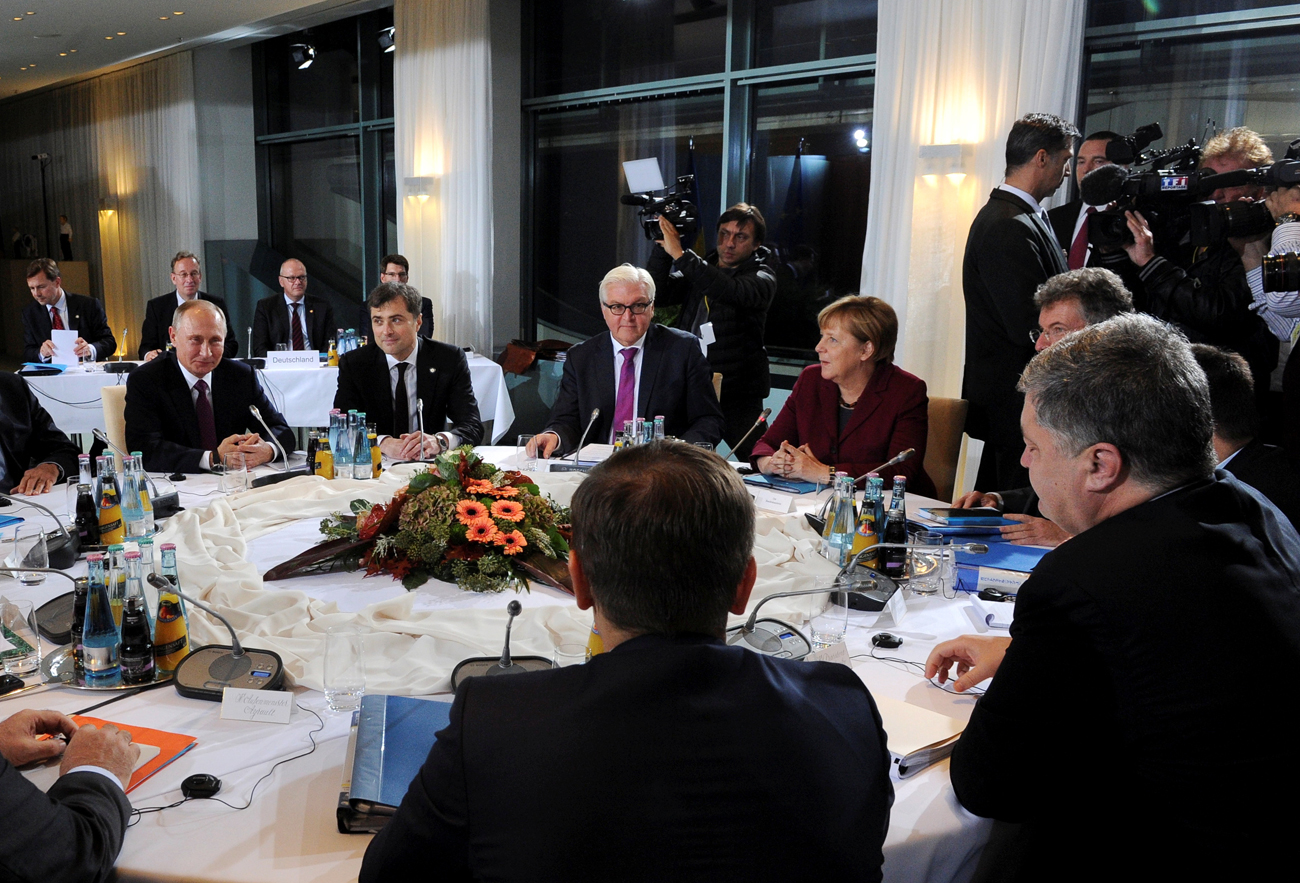 Reuters
Predictably, the meeting of the leaders of Russia, Ukraine, Germany and France in Berlin on Oct. 19 once again failed to bring any breakthroughs in the settlement of the crisis in eastern Ukraine. Russian observers believe that the current format is struggling to change things and Putin went to Berlin not so much for the sake of talking to Poroshenko as for the sake of meeting the European leaders.

From the very start, it seemed clear that the Berlin meeting of the leaders of Russia, Ukraine, Germany and France on Oct. 19 would not lead to any breakthroughs: Russia and Ukraine were accusing each other of failure to implement the Minsk accords and the Kremlin confirmed Russian President Vladimir Putin's participation in the talks just a day in advance. Earlier the Russian leader expressed his doubt as to whether the meeting would prove productive.

Kiev too was skeptical about the prospects: Before the meeting, deputy head of the Ukrainian presidential administration Konstantin Yeliseyev said (in Russian) that progress was unlikely. "One should not think that a miracle will happen," he said.

No way out of Donbass deadlock yet

Indeed, nothing happened: At the end of five-hour talks, no documents were signed. The sides only announced that within a month yet another “roadmap” for resolving the situation in the Donbass will be drawn up.

Despite the cautiously optimistic assessments from the participants in the talks – for example, Putin said that all the leaders were committed to the Minsk accords, while Poroshenko stressed that there is no alternative to the four-party format – experts point out that fundamental disagreements between Moscow and Kiev remain.

“Russia’s relations with Ukraine continue to be strained and if it had been about a dialogue with Kiev alone, Moscow would most likely have refused to take part in the meeting,” said Sergei Karaganov, head of the World Economy and World Politics Department at the Higher School of Economics in Moscow. According to Karaganov, Poroshenko cannot and does not want to fulfil the part of the Minsk accords related to the holding of local elections in the Donbass and amnesty for separatists.

Timofei Bordachev, a program director at the Valdai international discussion club, agrees with Karaganov: Ukraine is not ready for dialogue.

“The Ukrainian side is openly saying that it is waiting for a new president to come to the White House and expects that this president will be Hillary Clinton, which will make it possible to switch to a confrontation scenario once again,” Bordachev told RBTH.

According to Russian observers, Putin’s main aim in going to Berlin was not connected with talking to his Ukrainian counterpart. “This meeting is not about Poroshenko but about talking to the Europeans, and on a wide range of issues related not only to Ukraine but also to Russian-European relations and Syria,” said political analyst Sergei Mikheyev.

Washington suspends talks with Moscow over Syria: What next?

Ukrainian pundit Mikhail Pogrebinsky told (in Russian) the Kommersant FM radio station that one of Putin’s aims was to support the German chancellor, who had organized the meeting.

“He decided to save Merkel from the part of an embarrassed organizer whose plan has flopped. He must want something [from Merkel],” said Pogrebinsky.

Mikheyev, meanwhile, points to the importance that Germany has for Russia: “Germany is the most economically influential EU country, and Russia has a large trade turnover with it. That is why it is important to maintain relations and not to ruin them unnecessarily,” he said.

Also, he continued, it was important for Putin to talk to French President François Hollande after the Russian president cancelled a visit to Paris last week, saying that the meeting is “a good excuse for Putin and Hollande to meet, to clear the misunderstanding that arose between them.”

After the four-party meeting involving Poroshenko was over, Putin, Merkel and Hollande once again discussed the bombing of Aleppo, being carried out by the Russian and Syria air forces.

The German chancellor and the French president made it clear that the introduction of new sanctions against Russia was a possibility unless it called off air strikes against the stricken city. For its part, Moscow announced that it was extending the “humanitarian pause” in Aleppo and called for “terrorists” to be separated from the opposition.

Sergei Karaganov is skeptical about the prospects of a dialogue on Syria with the European leaders, but welcomes the fact that the talks took place.

“France and Germany do not have real levers for influencing the situation in Syria, where the key role on the Western side belongs to the U.S.. But a discussion would do no harm – why not have it? One should not miss a chance to have a dialogue,” he told RBTH.