Long road to Mosul: Why liberating the ISIS capital in Iraq won’t be easy 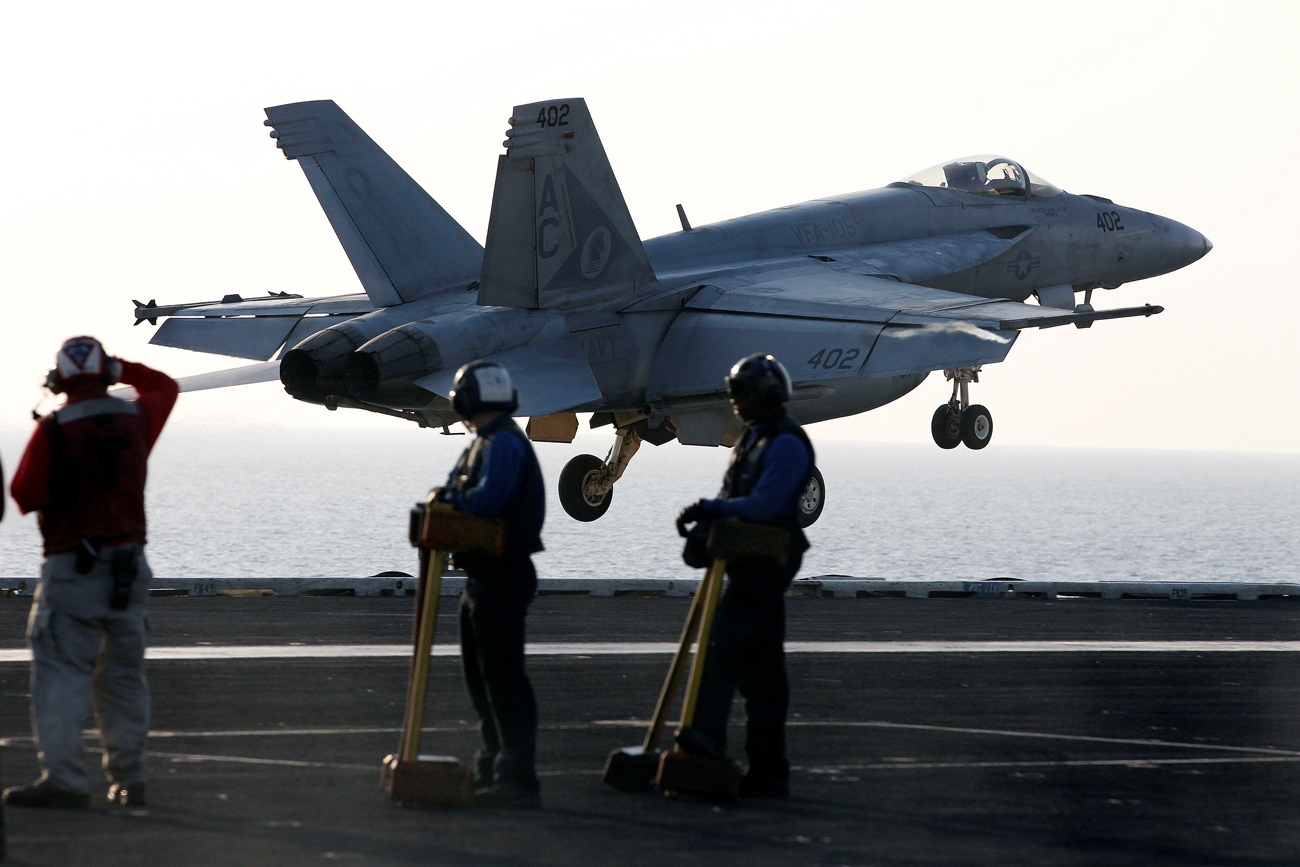 An F/A-18E Super Hornet takes off for Mosul, Iraq to provide air-support from the USS Dwight D. Eisenhower CVN 69 carrier in Arabia Gulf.

Reuters
The U.S.-led coalition is storming Mosul, the largest ISIS-controlled city in Iraq. Despite the huge numerical superiority of the coalition forces, Russian observers predict that the battle for Mosul will be long and bloody – including because of disagreements between the enemies of ISIS.

The beginning of the operation to liberate the Iraqi city of Mosul, which has been under the control of ISIS militants since June 2014, is under way.

By different estimates, there are between 700,000 and 1.5 million civilians, and from 5,000 to 10,000 militants in the city. The offensive, announced by Iraqi Prime Minister Haider al-Abadi on Oct. 17, involves 60,000 people – Iraqi army forces, Sunni and Shiite militias, as well as Kurdish Peshmerga forces. Air support is being provided by the U.S.-led international anti-terrorist coalition's air force.

"The moment of great victory is near," said al-Abadi, announcing the assault on Mosul. But a week after the start of the operation, it is obvious that it is faced with serious difficulties. As soon as the operation began, a conflict broke out between al-Abadi and Turkish president Recep Tayyip Erdogan about the participation of Turkish troops in the storming of Mosul.

With ISIS now launching counterattacks in the already liberated cities, U.S. presidential candidate Donald Trump has called the offensive of the U.S. and its allies on Mosul "a total disaster."

Who is going to do the fighting?

Military expert Vladimir Yevseyev, deputy director of the Moscow-based CIS Institute, believes that the coalition's numerical superiority is not critical.

"The Kurds are not going to attack Mosul," said Yevseyev. "They occupied the territory where their compatriots live in the vicinity of the city, and will not go further. Al-Abadi will not let Shiite militias into Mosul to avoid carnage. The Turks, the most capable force of all, will not storm the city to avoid casualties."

What remains, according to Yevseyev, is only the regular Iraqi army, where there is a high number of deserters and corruption is flourishing. "A maximum of 30,000 of the announced 60,000, maybe less, will advance," Yevseyev told RBTH. "In urban settings, with good engineering preparation [carried out by ISIS], such forces will not be able to take the city."

In addition, he explained, Mosul is not blocked from the west, which allows the militants to receive reinforcements: "It is definitely not possible to ensure the victory by the November 8 presidential election as [the U.S.] planned," he said.

Leonid Isayev, an Arabic scholar and senior lecturer of the political science department at the Higher School of Economics in Moscow, also believes that a prolonged war lies ahead – "for the province, for the settlements near Mosul, and then for each neighborhood of the city." The battle for Mosul, according to him, promises to drag on for months and lead to a large number of casualties.

Even a victory over ISIS in Mosul will not bring peace to Iraq, say Russian observers – a new conflict, ethnic or confessional, is likely to break out there. Isayev recalled that over the past two years, the Shiite militias that liberated Sunni villages from ISIS often simply massacred their populations for "collaboration with the enemy."

The Kurds also have their interests: By freeing the territories in northern Iraq from ISIS, they carry out territorial expansion, displacing Arabs from their villages and populating them with Kurdish settlers.

An Iraqi refugee woman who fled Mosul walks with her child as they wait to enter Syria in the desert area of Rajam al-Saliba on the Iraq-Syria border south of al-Hol in Syria's Hassakeh province / Source: AFP / East News

According to Isayev, the question of organizing post-war life in Mosul to avoid ethnic and religious cleansing is no less urgent than the struggle against ISIS. At a time when many religious and tribal militias are not subject to the government, it is not easy to achieve.

The fear of an ‘Iraqi Aleppo’

Another problem associated with Mosul is that a large number of civilians remain in the city. Since the start of the coalition's operation, there have already been reports of civilian deaths as a result of air strikes by the coalition.

Yevseyev noted that it is almost impossible to avoid civilian casualties in the bombing of cities, and Washington understands this, and is trying to avoid a situation similar to that of Aleppo, where the West accuses Russia and Syria of air strikes on civilians.

"The Americans now say they would not want to Mosul to turn for them into another Aleppo, so they will strike from the air as little as possible," said Isayev.

At the same time, he explained, the United States faces a difficult choice: Bombing leads to civilian casualties, but without aerial bombardment, the big losses will be borne by those taking the city on land – that is, Washington's Iraqi allies. This complicates both the taking of Mosul as such and coordination between ground forces of the army, militias and the Kurds.

– Iraq's population is, according to various estimates, 37 to 38 million people. The majority (75-80 percent) are Arabs; the largest ethnic minority are the Kurds (15-20 percent), concentrated in the north of Iraq, in the region of Iraqi Kurdistan, which has been effectively independent of Baghdad since the beginning of the civil war.– The Shiites constitute a religious majority in Iraq (60-70 percent of the population), while the Sunnis are a large minority (35-40 percent). ISIS professes a Sunni version of Islam, seeing the Shiites as heretics. The north of Iraq, including Mosul, is inhabited mostly by the Sunnis.