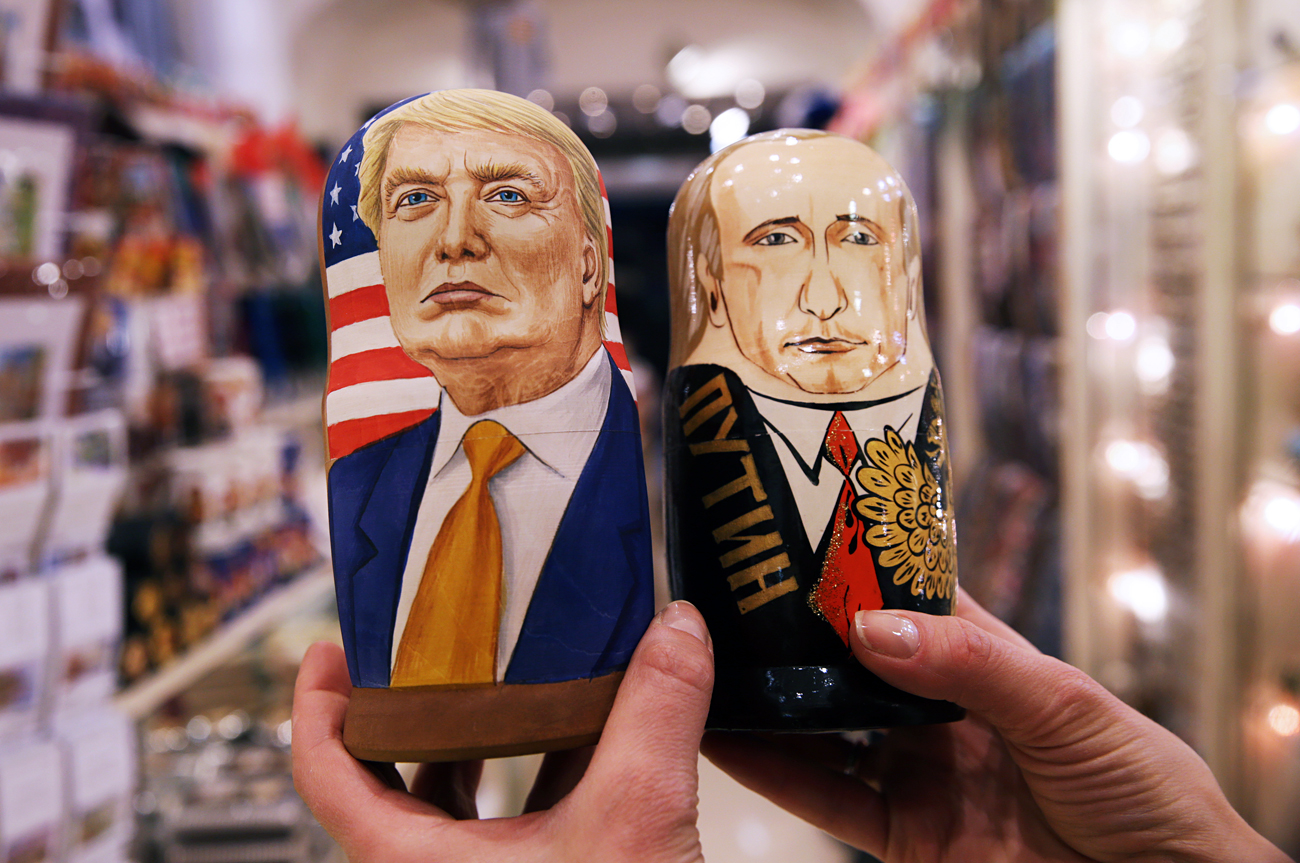 Russian dolls in the likeness of Donald Trump and Vladimir Putin in a souvenir shop.

Mikhail Pochuyev/TASS
Russians followed the presidential elections in the United States as attentively as they followed their own and everybody had an opinion to express following the stunning victory for Republican candidate Donald Trump, who had been the darling of the Russian media since expressing his admiration for Vladimir Putin.

The United States has a new president. The Republican candidate, the flamboyant Donald Trump, defied expectations to beat his Democratic opponent Hillary Clinton, shocking not only the expert community, but also the world capital markets and even Canada's immigration website, which crashed following a surge of applications from the U.S.

It seemed that by the end of the race everyone was against Trump: the Democrats, the American establishment, the sponsors and even his own party. Shortly before the elections the Republican elite demanded his removal, with a group of 50 former security officials saying that if he won, he would become “the most reckless president in all of American history."

Nevertheless, it was the "non-establishment" Trump – who has no political background – who edged out his rival to win, obtaining more than the 270 electoral votes needed for victory.

One of the biggest differences in his and Clinton's rhetoric was the approach to Russia, with Moscow banking on Trump as the candidate who would be best for U.S.-Russian relations following the Republican candidate’s earlier statements that he would be willing to work with Russian President Vladimir Putin to improve bilateral relations.

For a day the final round of the U.S.'s biggest soap opera was also the main event in Russia, with broadcasts from polling stations being shown live on national channels, as well as roundtables and interviews with commentators of different levels, from congressmen to diplomats. Putin was among the first of the world’s leaders to congratulate Trump on his victory.

Who to blame for bad roads and low pensions?

Feelings were mixed on social networks on the morning of Nov. 9, with many unsure whether to be happy or horrified. A person who in the event of his victory had promised to put Hillary Clinton in jail and block America off from Mexico with an $8-billion wall seemed like a "funny guy" to people in Russia, but the reality of his victory was a shock.

"Why is everyone so sad? Why isn't anyone cheering? Trump is the U.S. president! This is extremely joyful and everything will now be very interesting!" tweeted journalist Ilya Azar. 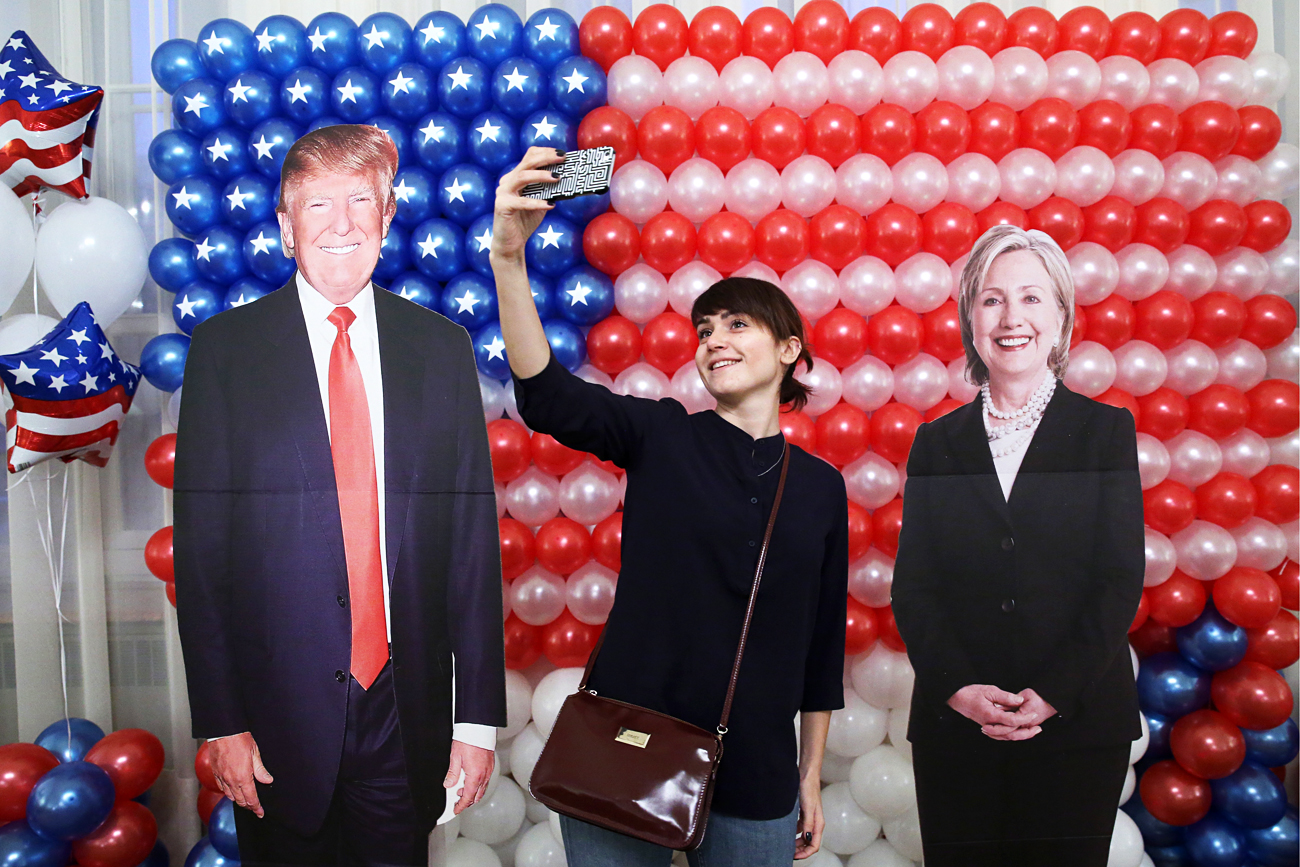 Russian liberals were somewhat confused. "I don't understand why the Kremlin is rooting for Trump. They haven't read his program. The guy will bring down oil prices by liberalizing production and export in the U.S.," commented opposition figurehead Alexei Navalny.

"I understand the Americans who simultaneously with voting for Trump were voting for the legalization of drugs. Now they just need to take a shot and sink into oblivion," wrote Echo of Moscow radio correspondent Vladimir Varfolomeyev, who said that besides the presidential elections, several states had proposed to vote for the legalization of marijuana on the same day. Then he added that he did not know whom Russia will now blame for its dirty doorways, bad roads and low pensions. "Surely not Trump!" he said.

The fact that Trump was the Kremlin’s preferred choice for the Oval Office and not Clinton with her anti-Russian rhetoric generated many jokes and revived the popular conspiracy theory that Trump is Putin's agent. "I don't know how exactly Trump was recruited (perhaps during his visit to Moscow in 2013 to conduct a beauty pageant). But I definitely know that he was recruited," wrote Facebook user Natalya Basaliga.

A parody Twitter account, @DonaldTrumpRF, was quick to react to the billionaire’s victory, posting jokes such as: "Many in Russia think that I will be responsible for building them roads, for stopping people from urinating in doorways and for eliminating the HIV epidemic. I will not!" Meanwhile, a spoof Russian Foreign Ministry Twitter account began asking, "When will tickets for Mars go on sale?"

‘In one window our flag, in the other the American one’

"They told us about the American elections in more detail than they did about the recent parliamentary ones in Russia," noted Kommersant FM observer Stanislav Kucher. 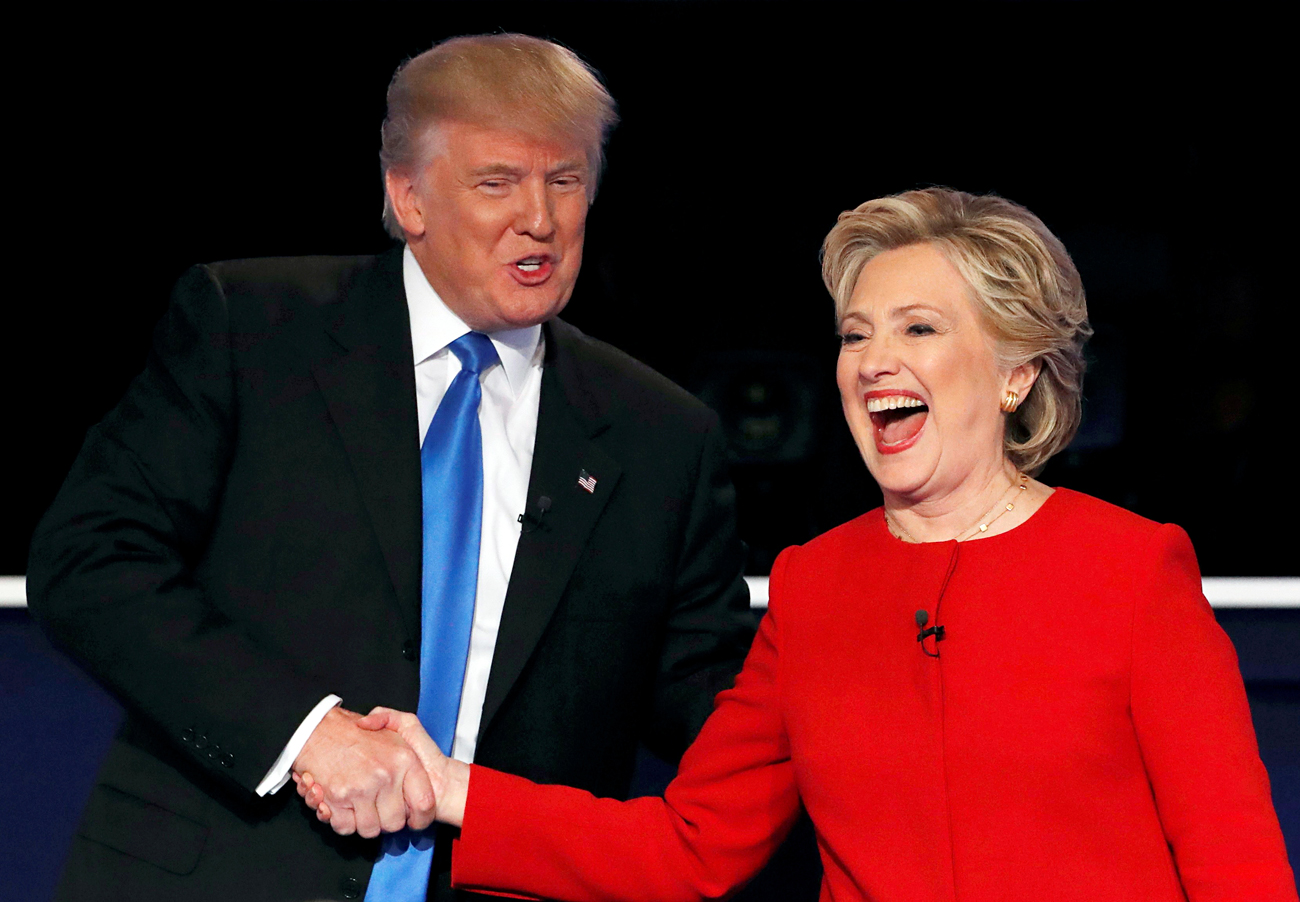 The subject matter was reported on so intensely, he said, as if the media were compensating for its lack of opportunity to comment in such a "free and selfless" manner on Russian politics. Calling this the media's own "inferiority complex," the journalist concluded that "when and if American prime-time national TV starts foaming at the mouth and discussing the details of the Russian presidential elections, only then will we be able to say that we've become truly great."

Meanwhile, editor-in-chief of Russian pro-Kremlin TV channel RT and the Rossiya Segodnya news agency Margarita Simonyan tweeted: "In general, today I drive around like this: In one window our flag, in the other the American one. I symbolize peace-friendship-bubblegum."

The news of Trump's victory was welcomed with heavy applause in the State Duma. Leader of the Liberal-Democratic Party of Russia Vladimir Zhirinovsky promised to hold a banquet with champagne for the new American president, while Crimean senator Olga Kovitidi expects Trump to recognize Crimea as Russian territory.