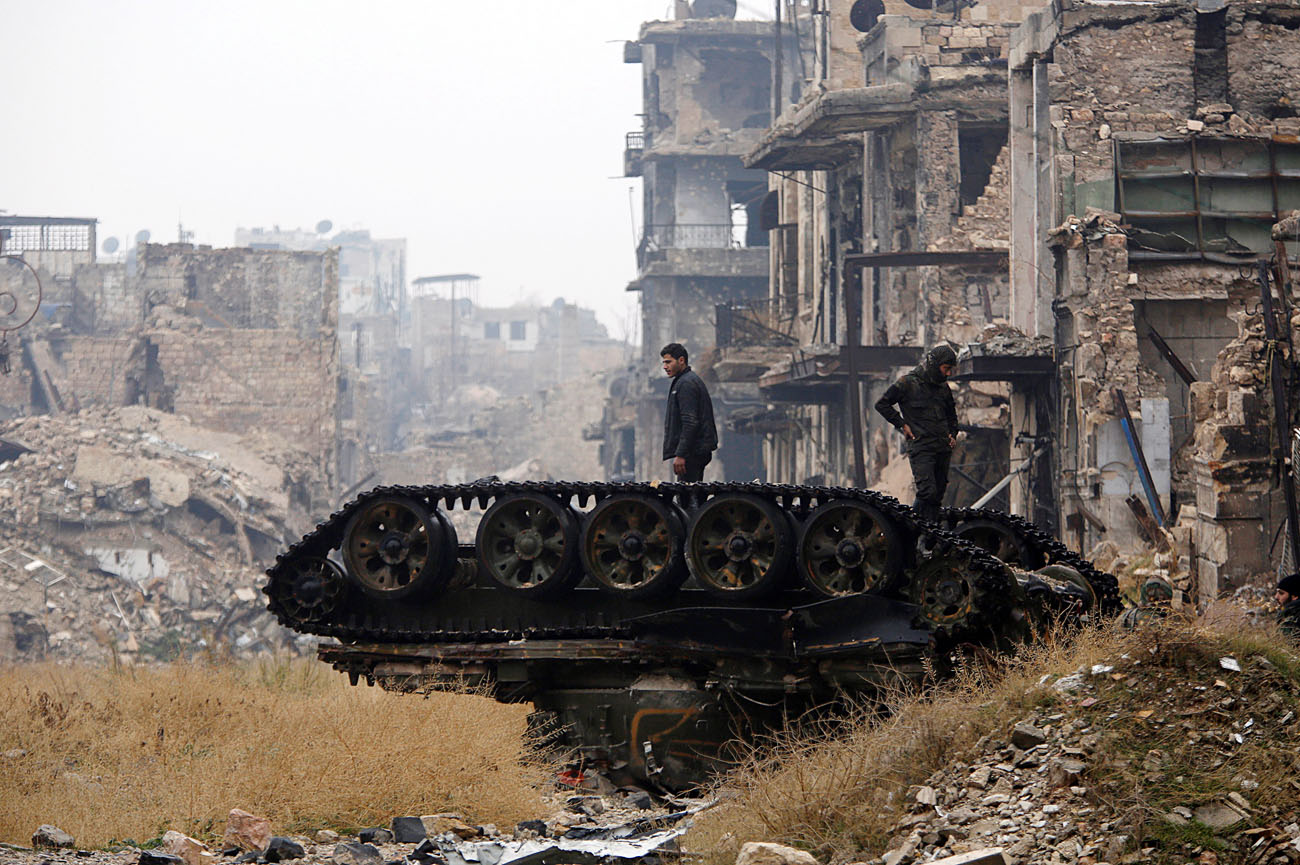 Forces loyal to Syria's President Bashar al-Assad stand atop a damaged tank near Umayyad mosque, in the government-controlled area of Aleppo, Dec. 13, 2016.

Reuters
On the night of Dec. 13 Russian Permanent Representative to the UN Vitaly Churkin announced that the last districts of Aleppo, which had been in rebel hands for four years, have fallen to the Syrian army. Russian experts believe that inter-Syrian talks aimed at settling the crisis will now begin. However, an end to the conflict is still far away.

The Syrian government has regained control over the remaining districts of eastern Aleppo, according to Russian Permanent Representative to the UN Vitaly Churkin, who proclaimed the end of military action in the formerly besieged citylate on Dec. 13 as the last rebel defences collapsed.

He stressed that currently the remaining rebels are abandoning the neighbourhoods captured by government forces along a humanitarian corridor opened to allow them to leave the city.

The diplomat also noted that it is too early to speak of the conclusion of the confrontation in the country.

"To say that the conflict in Syria is close to an end would, putting it mildly, be an exaggeration. A long way still needs to be traversed, but hopefully this path will return us to the trajectory of the resolution adopted last December, which speaks about the necessity of drafting a new Syrian constitution and holding elections supervised by the international community," said Churkin.

In his words, afterwards it will be necessary to begin a large-scale reconstruction of the country, which has been left in ruins by six years of civil war.

Following victory in Aleppo, Russia will try to have the representatives of the moderate opposition sit down at the negotiation table and begin a round of inter-Syrian talks.

"The Syrian Army has basically taken the capital of the armed opposition. Now we have the prerequisites for another round of peaceful regulation talks with the forces that are capable of holding dialogue and making decisions," said Mikhail Khodorenok, a retired colonel and military observer at the Gazeta.ru online newspaper.

But the first thing that Russia will do, in his words, is guarantee security for the civilians in Aleppo.

More than 100 Russian sappers have begun demining the city, according to Alexei Ramm, a military expert for the Russian daily newspaper Izvestiya.

Ramm told RBTH that Russian Defense Ministry representatives will provide humanitarian aid to residents who have suffered in the conflict, giving them basic necessities such as food, clothing, and medicine.

"Now it is necessary to keep the city under control and establish a strict checkpoint regime. Militant units cannot be permitted to again appear in the city," said Ramm, adding that Syrian army positions may be strengthened around the city.

Mikhail Khodorenok, however, thinks that the Syrian army's most combat-ready troops will be relocated from Aleppo to Palmyra.

After Aleppo the command of the Russian air force was preparing to liberate another large city, Deirez-Zor.

However, the Russian Defense Ministry's plans have been confounded by the 4,000 ISIS militants who in just three days have pushed Syrian government troops back out of Palmyra and recaptured the ancient city.

"Now all tactical plans are being reviewed and the command will make a decision on how to prepare the operation for liberating the city. There cannot be an advance on ez-Zor bypassing Palmyra, you'll have 4,000 ISIS militants at your rear," said Ramm, who pointed out that with the fall of Palmyra the terrorists have gained access, among other things, to the Diyaz airbase in the western part of the city.

"For the operation in Deirez-Zor to be successful it is necessary to hold on to Aleppo and Palmyra. It is only then that the ISIS militants will be surrounded, the rears will be secured and the terrorists will be driven out of the city," added Ramm.

Russian analysts believe that in order to prepare further plans it is important to understand how military and political relations in Syria will be coordinated with the Western coalition.

Cooperation with the U.S.

According to Pavel Zolotarev, deputy director of the Russian Academy of Sciences’ Institute of U.S. and Canadian Studies and a retired major-general, cooperation between Russia and the U.S. may improve if the post of U.S. Defense Secretary is given to James Mattis, the former commander of the Enduring Freedom operation in Afghanistan.

"He is a practical man with good military experience, who will have to reorganize the work that the Western coalition has been doing with Russia in Syria. I expect the expansion of military cooperation and not just political rhetoric about who is a friend or not," said Zolotarev.

Poles apart: Can the divisions between Russia and the West be bridged?

In Alexei Ramm's opinion, military cooperation may be built in the manner of America's campaign in Afghanistan in 2001, when the two countries' reconnaissance services shared information on the positions of terrorists in various regions of the country.

"I don't think that it will lead to joint operational planning, but we will not interfere with each other. But there may also be a radical change: The Americans will take care of the ISIS militants in northern Iraq and Russia will fully deal with the remaining terrorist groups in Syria," he added.