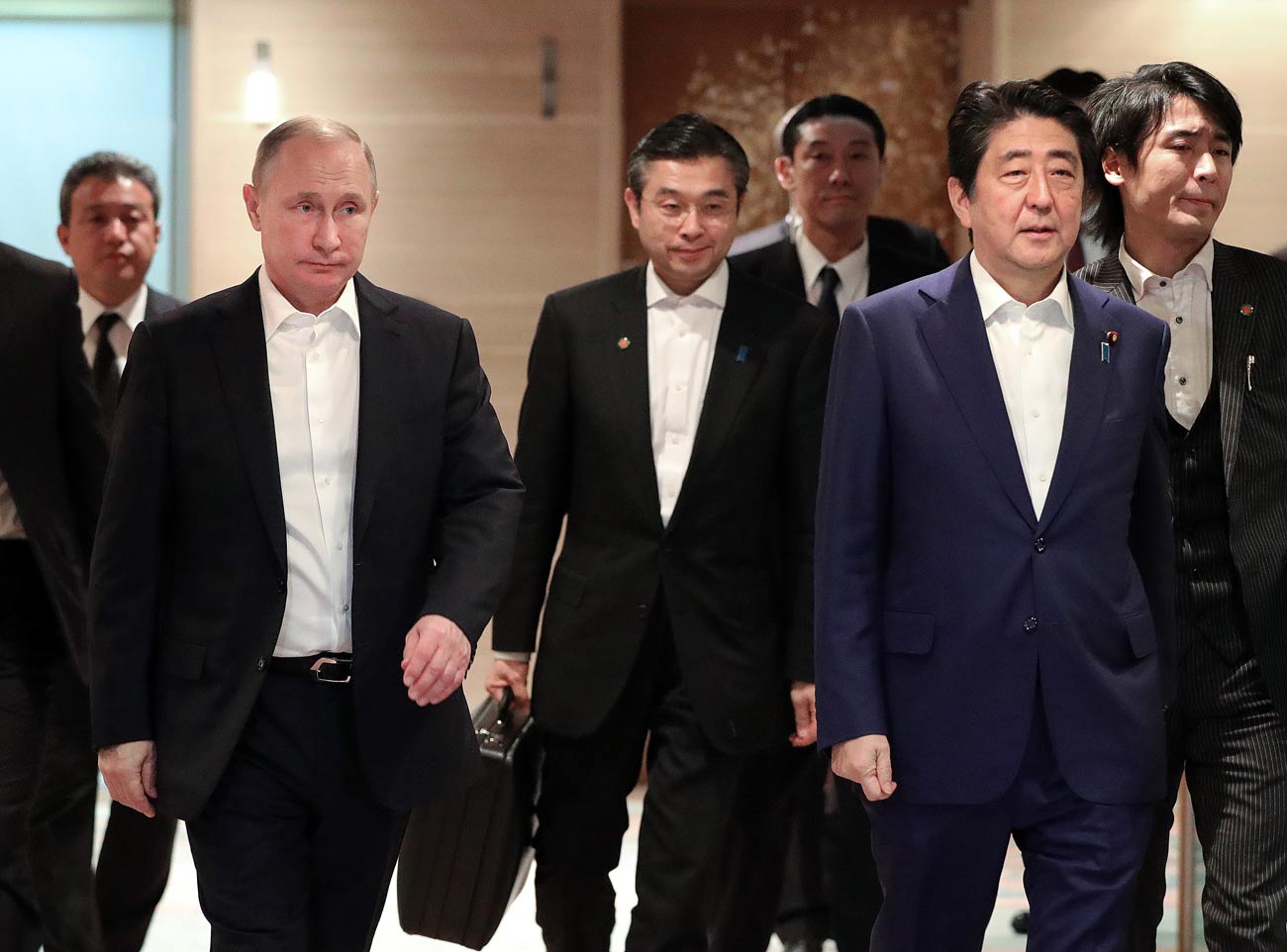 Michael Klimentyev / RIA Novosti
Day one of the two-day summit between Russian President Vladimir Putin and Japanese Prime Minister Shinzo Abe has come to an end in Abe's hometown of Nagato. On Dec. 15 the parties discussed a World War II peace treaty and a potential revival of military contacts. Unconfirmed media reports indicate that the leaders concluded the evening with a dip in the town’s hot springs.

On the first day of the Russia-Japan summit in the town of Nagato, Shinzo Abe and Vladimir Putin agreed on the text of a statement about joint economic activities on the Southern Kuril Islands, which comprise of Iturup, Kunashir, Shikotan and the Habomai archipelago.

Russian presidential aide Yury Ushakov said the leaders took only 40 minutes to reach an agreement, while Russian and Japanese officials had failed to come to an agreement after weeks of negotiations.

The joint statement will be released on December 16.

After a closed-door meeting with Putin, Abe told reporters that the leaders spoke about a World War II peace treaty and free access to the Southern Kurils for its Japanese former residents.

A delay of 3 hours

Vladimir Putin’s arrival to Nagato was delayed by three hours. According to his press secretary, Dmitry Peskov, the delay was caused by urgent work requirements and was not intentional.

“There was a slight delay and, of course, our Japanese colleagues were informed about it,” Peskov said, hinting that Putin’s delay was somehow connected with Syria.

After meeting his guest at the airport, Abe brought him to the Otani Sanso hotel, where they held several meetings in different formats, including meeting privately only in presence of their interpreters.

The first important news that came out of the meetings was that the countries agreed to defrost military contacts and re-launch a “two plus two” format.

“Today, it was agreed that we should restore some mechanisms of our bilateral dialogue, which in recent years had been frozen, I mean, including contacts between the military, in a ‘two plus two’ format: the Ministers of Foreign Affairs and Ministers of Defense," Russian Foreign Minister Sergey Lavrov said after the Putin-Abe meetings.

Syria, Ukraine and the United States

In addition to bilateral issues, Putin and Abe discussed international relations, including the situation in Syria and Ukraine. The parties agreed on the need to implement the Minsk agreements. Lavrov added that Russia and Japan hold very close or similar positions on these matters.

The parties also discussed security issues in the Asia-Pacific region, including the deployment of the U.S. missile defense system on the Korean peninsula.

“We feel that our Japanese colleagues have begun to better understand Russian concerns in this regard,” Lavrov said. “It was stated that in any case Russia and Japan, despite the special relationship between Japan and the United States, are interested in formats that exist in the Asia-Pacific region for addressing security issues, and cooperate closely.”

Media reports indicated that after the talks, Putin and Abe planned to relax in the local hot springs (onsen), taste local fish and stargaze.

On Dec.16, Putin and Abe will address a joint press conference in Tokyo, and take part in the Russian-Japanese business forum, where a large number of agreements will be signed.