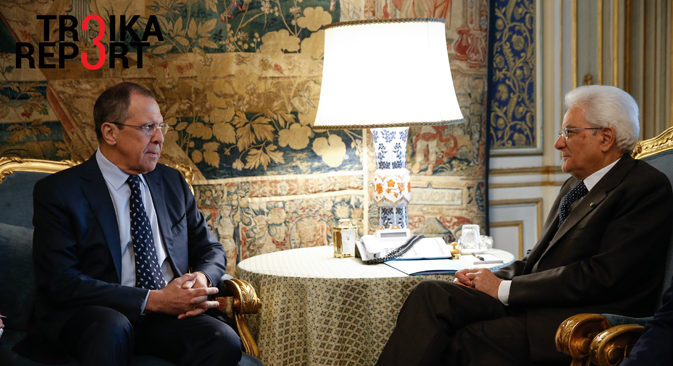 Flick.com / MFA Russia
Recent high-level bilateral talks in Rome between Russian Foreign Minister Sergei Lavrov and the Italian leadership indicate that Italy is not entirely content to toe the Brussels line on Russia. Is Italy aiming only at protecting business interests or is there another goal?

With Russia-EU relations still at a crossroad, burdened by sanctions and accumulated irritation, Moscow received a rare, albeit feeble, signal that things can one day get back on track. It came from Rome.

While tight-lipped bureaucrats in Brussels claimed there was no alternative to the prolongation of sanctions, Russian Foreign Minister Sergei Lavrov performed a diplomatic tango with the Italian leadership on its soil, meeting with President Sergio Mattarella and his counterpart Paolo Gentiloni.

The bilateral talks were marked by modest yet symbolic agreements. Signed amid the on-going war of sanctions initiated by the West against Russia, it has narrowed the difference between the value of style and substance.

Both sides confirmed support for the Sukhoi Superjet 100, endorsed plans for the launch of joint production of helicopters, and construction of a Russo-Italian experimental thermo-nuclear reactor, while one of the agreements approved the certification of Italian technologies to be applied on Russia’s railways.

It has been noted that despite the sanctions regime, Italian company Cimolai has opened a plant in the Urals city of Chelyabinsk, and another company, Gruppo Manni, has launched a production line in the Volgograd Region. Meanwhile, tire manufacturer Pirelli is expanding its joint projects with Russian partners. 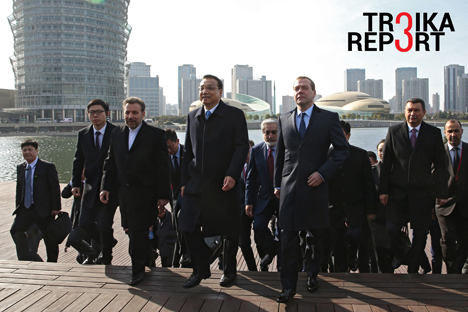 Incidentally, the top-level talks held by Lavrov in Rome came shortly after a daring initiative by Italy at the meeting in Brussels of the European Union Permanent Representatives Committee. A statement of the Italian Embassy in Moscow clarified that the decision was taken by Prime Minister Matteo Renzi on the ground that in dealing with such an important country as Russia there should be no “automatic” procedures but they should be precluded by political deliberations.

On the surface, it looks like Italy is out of step with other EU member states. Fyodor Shelov-Kovedyayev, an academic and former First Deputy Foreign Minister of Russia, speaking to Troika Report, does not believe that the Italian straw will break the camel’s back, but notes a certain new trend.

“The contours of a group of nations within the European Union have become visible. These nations want to speak for themselves, and Italy is definitely one of them. Just like Hungary, sometimes Spain and the Czech Republic. Without challenging Trans-Atlantic solidarity, these nations would like the EU to have more independence of judgment. They would like to see a polyphony of opinions within the union, and not be subjected to policies imposed by two or three centers of power.”

– What motivates Italian Prime Minister Matteo Renzi when engaging Russia and, in particular, the Russian president, who is de facto the target of the EU sanctions? Is it a desire to re-shape the policy-making mechanism within the EU? Is it dictated by purely economic reasons and the decision to capitalize on the previously vigorous business interaction with Russia?

“It is a mixture of motives. Apparently, the Italians would not like to squander the mutually beneficial trade, joint projects, and investment opportunities. Concurrently, we see that Rome is not happy with having to play a game it has not asked for.”

– Do you foresee any positive outcome from elevating the issue of prolonging sanctions against Russia from its present technical status to the level of a topic for political debate?

“I can hardly envisage a U-turn. Italy and Luxembourg would probably proceed with efforts to curtail in some way the sanctions regime. Poland and the Baltic States would most certainly be engaged in verbal war against Russia. Germany and France would act as pacifiers balancing between the two camps. Ultimately, nothing would happen. The status quo would be preserved intact.”

Irrespective of the balance of power within the EU, Italy will preserve its “special relationship” with Russia, just like it did for many years against all odds. Anatoly Adamishin, former Russian Ambassador to Italy and former First Deputy Foreign Minister of Russia, shared this viewpoint with Troika Report.

“Italians are very special: they are reputed for always avoiding extremes in relations with Russia. Amid the Cold War, the first Western leader who paid a visit to the Soviet Union was the Italian president. The first agreement on cultural ties was signed by the USSR with Italy. I can claim that this is “in the blood.”

– “In the blood”? Is that not a bit of an exaggeration?

“What do I mean? First of all, Italians are wise people, the heirs of Ancient Rome, who have politics in their veins. Secondly, they are rational people who at the height of the Cold War were concluding mutually beneficial deals, be it supplies of Russian natural gas to Italy or the construction of the Fiat car-manufacturing assembly plant in the Volga Region. 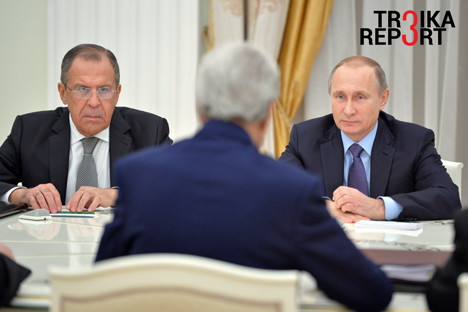 What’s behind John Kerry’s festive goodwill to the Kremlin?

“Thirdly, the Vatican factor: The pontiffs never embraced extreme views and politics. Take, for instance, Pope Saint John XXIII, the Pope-reformer, noted for his dictum: ‘It is advisable to fight ideas but not those who subscribe to them.’ It is possible to co-exist with people who believe in ideas that we consider to be wrong. Actually, it was a reference to the Italian Communists.”

– What do you say to assumptions that Italy is attempting to undermine the present Germany-centered gravity inside the European Union?

“Possibly. With France under Francois Hollande losing its former heavyweight status, Italy can step into these shoes. Prime Minister Matteo Renzi is pushing forward economic reforms, and it is starting to pay off. It would make sense to add value to this by scoring foreign policy successes.”

Notably, in March 2015 in Moscow, at the final moment of a meeting with Vladimir Putin, Renzi made the unexpected suggestion to apply the model of decentralization implemented in the Italian province of Trentino-Alto Adige to Ukraine. It appeared like a trial balloon sent up in order to join German Chancellor Angela Merkel and Francois Hollande in the capacity of a mediator tackling a truly European crisis.

Today, by tacitly courting Russia, Italian politicians could be looking not only at assuaging the negative impact of sanctions for business but also aiming at boosting the country’s status inside the EU.