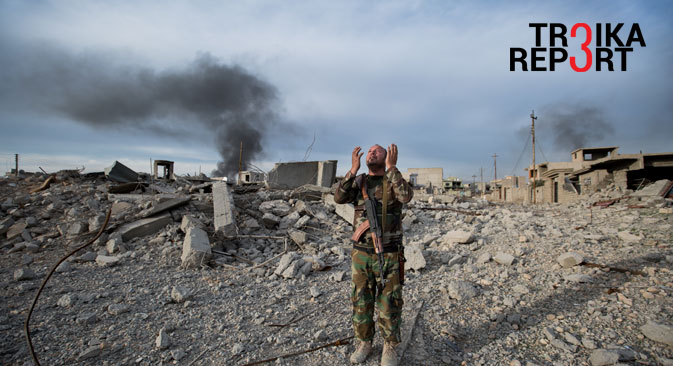 After a couple of hours of fire fights ISIS was kicked off out of the city of Sinjar in Iraq, Nov. 13, 2015. The Yezidi Shero Ibrahim Abdo Khalo realized the destroying of his house when he came back to his home city after one year and three months. When he arrived in the ruins he begins to pray.

AFP / East News
As the world’s geopolitical balance enters a period of instability and reforging, the emergence of a new international order is being complicated by new conflicts and the growing spread of Islamic fundamentalism, with Islamic State (ISIS) proving its ability to strike far beyond the Middle East. How serious are the threats of terrorism and regional wars to global security?

Global challenges this year have paled in comparison with the existential threat emanating from the rise of religious extremists in the Middle East. And Islamic fundamentalism has not been restricted to the region – the spill-over of terrorism has been felt throughout the world.

By the end of the year there were three coalitions, instead of one, all formed to fight the common foe, ISIS. The U.S.-led coalition was supplemented in 2015 with a Russia-led alliance embracing Syria, Iran and Iraq. Recently, Saudi Arabia announced the formation of a third grouping, this time formed of Islamic nations. The idea of a global “concert” of responsible nations to battle the jihadists has faded into thin air.

How grave is the danger to the established, albeit changing, world order? Are we on the brink of an all-encompassing chaos? Dmitry Polykanov from the Center for Policy Studies in Russia, a Moscow-based independent think tank, suggested to Troika Report that it was better not to sound alarmist but subscribe to a dialectic approach.

”I think ISIS can trigger off global chaos. Yet they will not be able to unite all the extremist forces in the world, or even in the Islamic countries. The danger is that ISIS, just like Al Qaeda, is a network organization and has small chapters in various Muslim countries. It is not a global terrorists’ international, for now. It cannot blow up the world. But it can aggravate things, because they are in the business of money laundering, smuggling, drug trafficking, etc. and they have an impact on adverse processes like uncontrollable migration. This is the real danger.”

– The problems you mentioned, like money laundering, smuggling, and drug trafficking, are trans-boundary by nature, and thus qualify as global challenges. How should we deal with these issues amid a formidable discord among major stakeholders and players in international affairs? 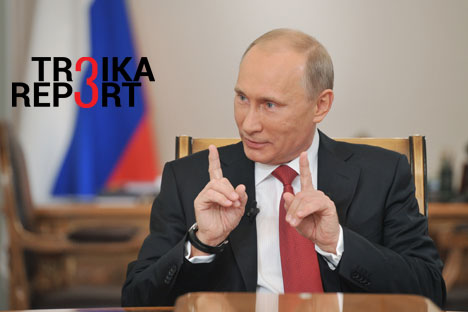 “It is quite clear that the world is lacking new ‘rules of the game’ and the major players should sit down at one table to formulate these rules. When our partners say ‘it’s all fine, we have the Helsinki agreement, we have the principles of the UN Charter,’ this is an illusion. The world has changed. The interpretations of the fundamental principles are different. There is a need for a global consensus on the emerging new global order.”

For the moment, such a “consensus” is nowhere to be seen or found. The instinctive drive to simplify the higher mathematics of foreign policy tempts one to juxtapose the global “order” and “chaos” and judge the developments of 2015 by these two yardsticks. However, Anton Fedyashin, assistant professor and director of the Carmel Institute of Russian Culture and History at the American University, talking to Troika Report, warned against oversimplification.

“I think what we have really seen, first and foremost, is not a battle between ‘order’ and ‘chaos’ but the implosion of America’s and the West’s unilateralism. Whenever reasonably stable systems begin to crumble, chaos is the inevitable outcome. It’s a side effect. That is what is happening. The remarkable thing is that the unraveling of this order was played out in the theater of the Middle East. That was unfortunately of the United States’ own making with the invasion of Iraq, which opened up Pandora’s box.”

– There has been a certain evolution of theories designed to explain the existing world order. Previously, it was a bipolar world replaced by a unipolar world. Then the idea of multi-polarity was moulded. Today, there is talk of a non-polar world, which is loosely structured and easily plunged into chaos. Where are you in this dispute?

“I am between a multipolar and non-polar world. But I think what is going on is much deeper than the symptoms, which are easy to look at and analyze. There is a tectonic shift in the geopolitical balance of power in the world. Places such as Syria and Ukraine got trapped on the frontlines. That explains the destructiveness of what is going there.

“Ultimately, I would stress the fact that these are symptoms of a much greater phenomenon: a shift of chief political centers from the West and their distribution across the planet. It’s way too early to tell – as it is always is with tectonic shifts – where exactly this will end and what will come of it.”

– The priorities of global challenges have changed with the years: After the menace of total nuclear annihilation came the frustration of economic and social underdevelopment, then the destructive effects of climate change. Now Islamic State (ISIS) seems to be on everybody’s mind as a universal threat. Will it serve a good cause by uniting what is believed to be the civilized world? 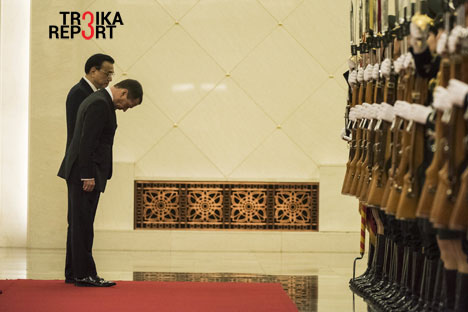 “ISIS is the biggest test of whether the world in this shifting geopolitical kaleidoscope can find a common language as to tactics as well as to strategy. It is the details that will determine whether the civilized world will be able to contain and even defeat this evil force in the next several years.”

Basically, the turn for the worse this year in the world’s turbulent regions has entrenched the notion of a “disorder” fomented by rampant extremists. Whether or not these destructive forces thriving on chaos will shape the new world order constitutes not abstract theorizing but a crucial challenge for all who cherish democratic values and their way of life.